An inmate of the Ditchling Red Cross Hospital for four months, the bridegroom gradually regained his hearing and the powers of speech. 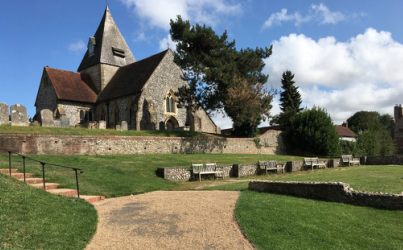 The inmates of the hospital formed an arched with their stick and crutches at the church door.

Henry was born in 1893 in Fulham to parents George Edward and Winifred Monk of 66 Start Road, Fulham.

He had a number of periods at home, recovering from Trench foot, in one instance and returning to France for a month in April/May 1915. He was wounded at Ypres in May 1915, and again wounded at Loos on 25 September 1915. This left him def and dumb. He was then back in Britain another 3 months before returning to the BEF in August/September 1916. His foot was distorted, while a wound to his left arm had header.

He was in Britain again from the end of September 1915 to 20 June 1916. He was formally discharged from the army as ‘no longer physically fit for war service’ on 21 September 1916.