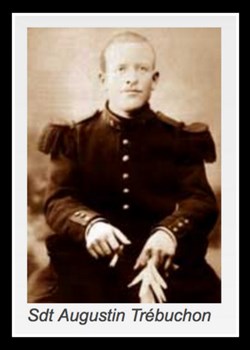 The last French soldier to be killed in action during the Great War, Augustin was born on 30 May 1878 in the small farming village of Montchabrier (Lozère), Languedoc-Roussillon. The eldest of five children, Augustin was orphaned during his teenage years and, prior to enlistment in his compulsory military service, worked as a communal shepherd in order to keep the family together. He was also an accomplished accordion player who was often requested to play at village weddings and other events. In October 1899, however, he had to take a break from this life as he was legally compelled to join the army for a duration of three years. He joined his local regiment, the 142e Regiment d'Infanterie, at Mende, and nothing of any real note occurred during his service, which was spent, on the whole, quite locally - most of his service and training taking place in Lozère and the neighbouring Herault. By December 1902, Augustin had been transferred to the active Army Reserve and he returned to Montchabrier to continue his life as before.

By the time of the mobilisation of French forces on 1 August 1914, Augustin was a part of the French Territorials and so he received his notice of mobilisation shortly afterwards. He was recalled to full-time service (this time into the 123rd Regiment d'Infanterie Territoriale) on 3 August and, by 13 August 1914, he was back in barracks at the regimental depot of the 123e RIT at Mende before moving into general reserve at Toulon for the next few months. In March 1915, at the camp of Carpiagne near Marseilles, a new regiment was formed - the 415e Regiment d'Infanterie - into which Augustin was to be transferred and to serve in for the remainder of the war.

As part of the 6th Company of the 415th RI, Augustin saw his first action on the Champagne front at the end of September 1915. A move to the Vosges and Alsace then followed before he played a part in the Battle of Verdun in the late summer of 1916. He remained in this sector of front throughout much of 1917. During this period Augustin was twice wounded and, upon his return from convalescence, he was appointed as one of 6 Cie's ‘Agents de Liaison' (basically a messenger or ‘runner'). Further service on the Somme, the Champagne and the Aisne followed through 1918 with Augustin receiving a promotion in September 1918 due to him being ‘a good soldier ... ...who always set an example to his younger comrades'.

By 10 November 1918, as part of the 163rd Infantry Division, the 415 RI was in the Ardennes sector. The 415 RI was following orders to continue the advance (due to Petain - upon the orders of Foch - believing that the Germans were taking too much time over sorting out Armistice details after their first approaches of 7 November), and was taking part in a battle at Vrignes-Meuse. Ordered to cross the Meuse and "attack as fast as possible, by whatever means and regardless of cost", the morning of 10 November saw the Meuse in near flood with low visibility due to fog and driving rain with most bridges destroyed by shellfire. French engineers had built a plank footbridge the previous night and the first men crossed by this method taking telephone cables with them (several falling into the swirling waters and drowning). At 10:30 am, the fog cleared and it was now possible to see the German machine guns above the French positions. However, it was now possible for the French artillery to open fire without fear of hitting their own soldiers so the attack commenced up the hill. The battle eased during the night, but continued at 7:00 am the following day (11 November 1918) with the attack order only being rescinded at about 10:00 am as news of the forthcoming Armistice filtered through to the troops of the 163rd Division.

At 10:45 am on 11 November 1918, Sdt Augustin Trébuchon was passing through the lines with a message for the frontline soldiers. As he crossed the railway lines at Vrigne, he was hit in the right-hand side of his chest by a German bullet and he died almost instantly. The message he was carrying read, "Rassemblement à 11h 30 pour le ravitaillement" ("assemble at 11:30 for food"). Just 15 minutes later, the divisional bugler (Delaluque) sounded the end of hostilities and the French withdrew from their newly captured positions.

Augustin was the 91st casualty of his regiment that day and the last recorded French battle death of the war. All of that day's casualties within the regiment (and the French army as a whole?) were recorded as having died on 10 November 1918. This unusual recording of the deaths gave rise to speculation that the French high command was embarrassed about sending men to their deaths, knowing that the Armistice details had already been agreed upon (speculation which grew further when the 415th RI wasn't invited to the 1919 Victory Parade in Paris). The genuine reason, may however, have been more humanitarian and may be related to war-widow pension rights.

Augustin is buried in the cemetery at Vrigne-Meuse and he is listed on memorials at La Malzieu-Ville (where he is listed as ‘Victorin Trebuchon' with the death date of 10 November 1918), St Privat du Fau and at Vrigne-Meuse. He also has a street named after him at Vrigne.