German Memorials on the Western Front

One of the consequences of the German occupation of France during the First World War was that their occupation became formalised with the establishment of well constructed laagers and camps. Often these became associated with specific units which were based there for months and even years and, as a consequence, the units sought to create a sense of domestic order which can still be seen today in some of the striking memorials and sculptures which were created both for specific units and individuals.

The Volksbund Deutsche Kriegsgraberfursorge (VDK), the German equivalent of the CWGC, was not instituted until 1919, so during the war there was no standardisation of head-stones or Friedhof (cemetery) construction with the result that German memorials represent a variety of styles and levels of skill. After the war, all German burials were consolidated into the sombre cemeteries which reflected the nation’s attitude to death and which often featured especially commissioned sculptures.

Perhaps the most familiar of these are the four grieving figures at Langemarck sculpted by Emile Krieger which reinforce the sombre atmosphere. Sadly few people visit Vladslo German Friedhof (image below) where the Grieving Parents were created by the German artist Käthe Kollwitz, in memory of her son Peter who was killed in October 1914. 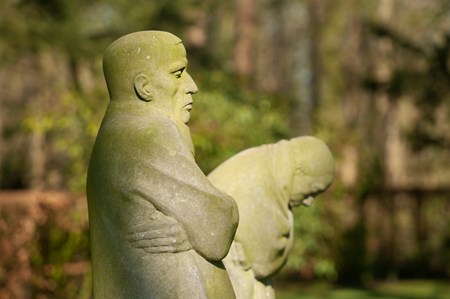 "…are endowed with the strength to make sacrifices which are more painful than giving our own blood. Consequently, we are able to see our own fight and die when it is for the sake of freedom."

Because the German army had no formal burial organisation during the war itself, the friedhofs often are associated with specific regiments such as the monument to the Reserve Infanterie Regiment (RIR) 234 in Brécy-Brières. 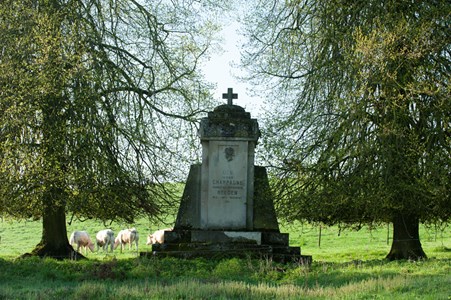 Flanked by two Lebensbäume (‘trees of life’) the monument features a Stahlhelm relief which is still remarkably untouched by the elements. Another outstanding example is the memorial to the Landwehr Infanterie Regiment (LIR) 27 at Apremont which stands as the centrepiece of what must be one of the most beautiful cemeteries on the Western Front. 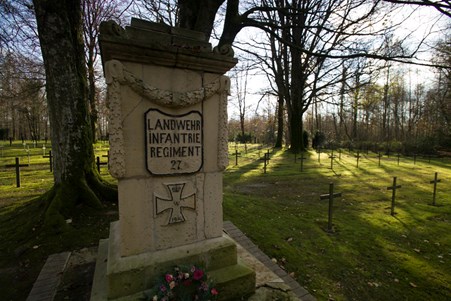 Other striking examples are the cemetery marker erected by 117th Infantry Regiment of Hesse, commanded by Oberstleutnant Rüdiger von Tiedermann in Chaulnes and an especial favourite of mine, the monument at Machault which marks the site of Feldlazarett Nr. 8. 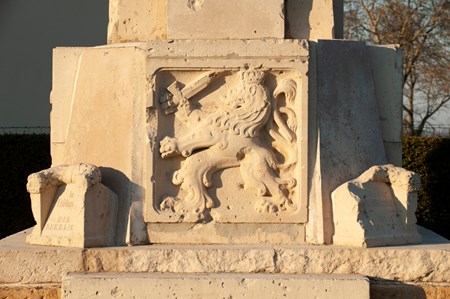 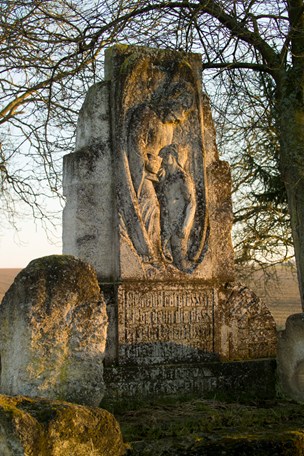 The subtle depiction of an angel of mercy, giving water to a wounded soldier, must surely be one of the most beautiful memorials of the war.

Sadly many of these memorials show signs of vandalism and even traces of recent damage by hunting rifles as witnessed by the memorial in Azannes. 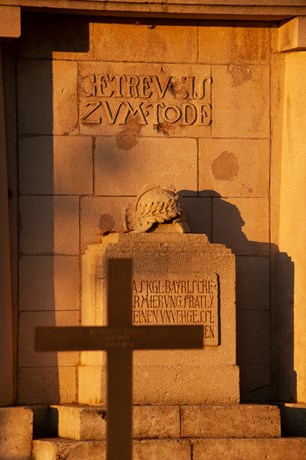 The Azannes Friedhof is also adorned with a beautiful gateway whose graceful lines are testament to the importance which the Germany soldiery attached to their dead comrades. 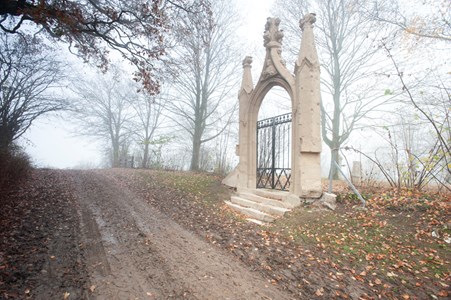 The post-war requirement that German dead be re-interred into consolidated cemeteries means that many of the original battlefield cemeteries have been forgotten and often it is just these gateways which reveal their location as with the original gateway to a cemetery near Bouconville. 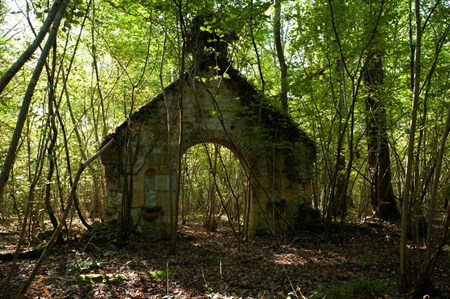 Another indicator of the site of former friedhofs are the statues of lions. Often to be found in remote areas they are subject to decay and vandalism as with this example from near Monthois. 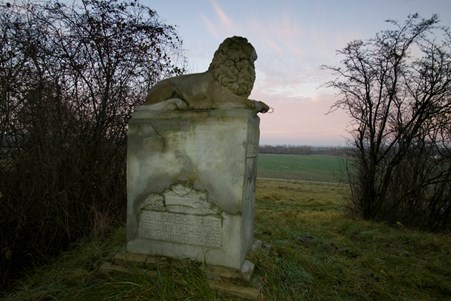 But those in remoter regions have survived comparatively unscathed as with this lovely example amidst the pine forests St. Marie-Aux-Mines. 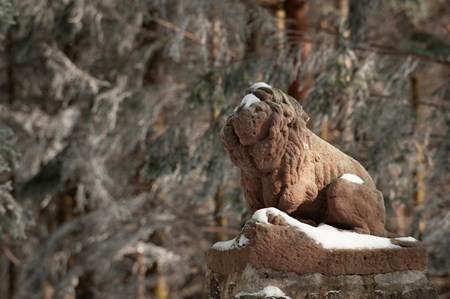 Another indicator as to previous cemeteries is often provided by clusters of headstones, generally in remote woods and forests. One of the most evocative is the (see below) near the Tête de Faux in the Vosges Mountains where the roughly carved headstones have an immediacy and emotional impact as clearly they were carved by the comrades of the fallen men. 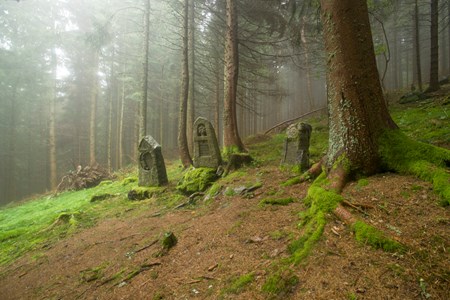 Another cemetery in the Vosges is the Uhlan Freidhof on the lower slopes of Hartsmannwillerkopf (HWK). 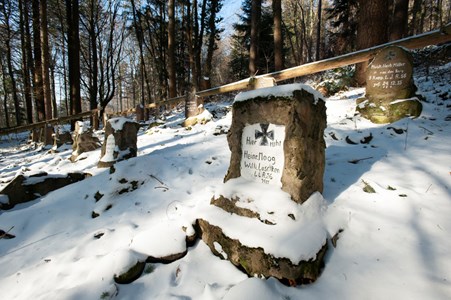 The Vosges mountains. are also the location for a extraordinary group of memorials on the Le Petit Donon which are unique on the western front. In 1914 the 119 & 120 RIR captured this remote summit and marked the spot where each soldier, both French and German, had fallen. In 1915 the markers were replaced by over 30 engraved rocks so one can follow the progress of the assault right to the summit, where a huge engraved boulder marks the culmination of the action. 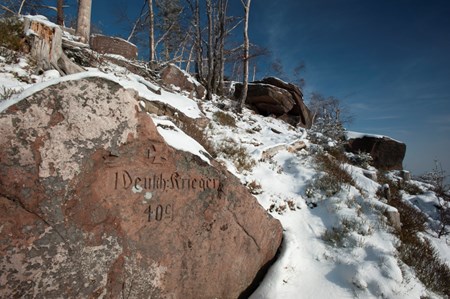 On the western edge of the Vosges the little-visited Col de Chapelotte has a remarkable collection of German remains including a telerifique terminus station and a friedhof  hidden in the woods which has some exquisitely carved headstones. 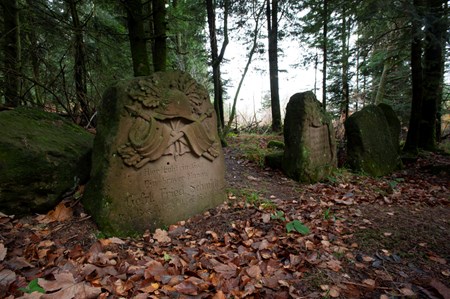 The underground fighting here was the most intensive on the Western Front with over 350 tonnes of explosive being used on a front that was only about 300 metres wide and there is a memorial commemorating miners killed in a single explosion. 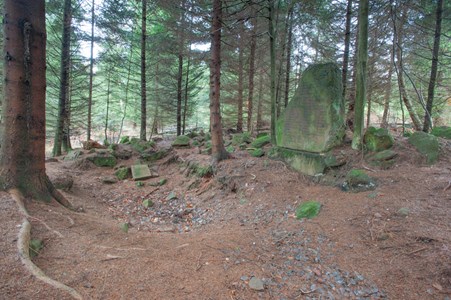 There is also a carved rock set into a trench wall to mark the place where Lt. Karl Junker, 4/Coy. 70 RIR was killed in October 1916. 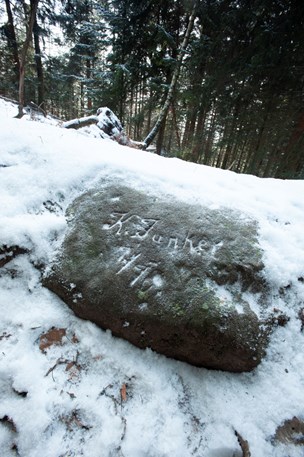 Today the forests of eastern France afford a poignant setting to these lovingly carved headstones and the individual ones which survive offer a varied and range from a passing memorial to some comrades in the Swiss Lippique on the Hartsmannwillerkopf (immediately below) to a martial memorial shaped like an artillery shell to Otto Staubwasser in the woods near St. Mihiel. 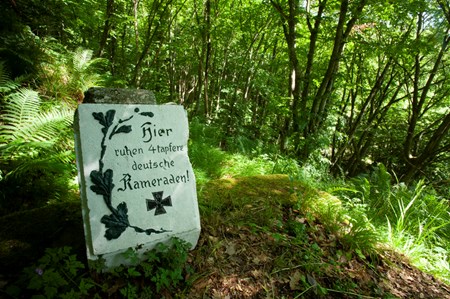 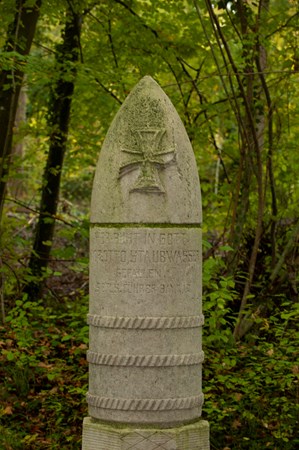 The increasingly wooded nature of the landscape as one travels eastwards along the western front gives protection to a number of such memorials which have no equal in the British sectors. There are numerous examples such as the one to Rich Krell who was killed on 20 April 1916 in the region of Verdun. 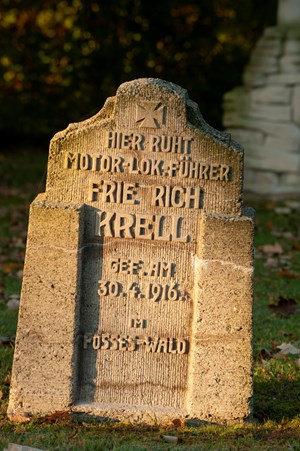 There is also one at St. Mihiel (see below). 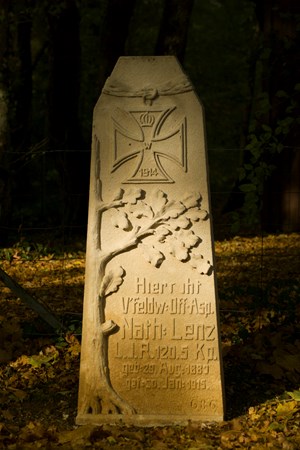 The memorial to three men in the Meuse-Argonne is one of the best preserved examples of the German freedom of expression when creating memorials to their comrades. 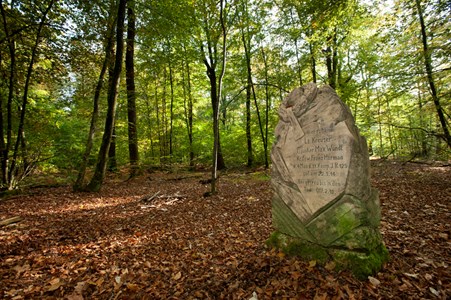 The stability of life behind German lines for much of the war meant that unit memorials were often carefully detailed as with this monument at Monthois: 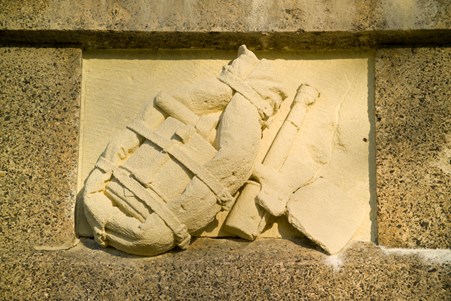 And the near-by Heckhoff Lager has a memorial constructed by the 2. Landwehr Pionier Kompanie. The tools of their trade being clearly shown on the image below. 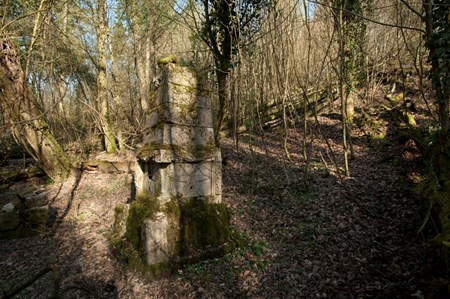 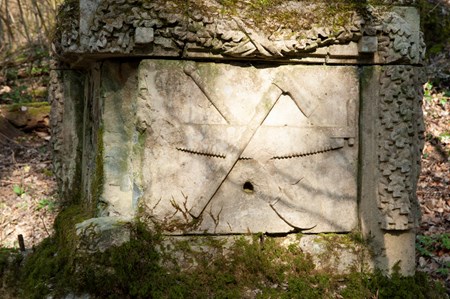 The sadly dilapidated condition of this, and many other such memorials, is due to the fact that the VDK is funded purely by charitable donations and has no remit other than the maintenance of the friedhofs in France, where, as memorials created by the invader, they are of no interest to the state authorities. Some local groups, notably in the St. Mihiel Salient, have adopted memorials in their region and sought to conserve these memories of the conflict.

In addition to actual memorials there are some superb examples of the troops desire to transform their rest-areas into places of comfort. At Tilcey-sur-Trey, Ernst Junger described in Storm of Steel how he lived in a

"…curious village of blockhouses … in a tiny hut, held bedded in the slope, surrounded by rampant hazel… The window looked out on to a wooded facing slope, and a narrow strip of meadow, which a stream flowed through."

Today one can still see the carefully sculpted caduceus outside the first aid post (see below) together with the Ordmann Quelle, more commonly known as the Quatre Goulots, which is a beautifully constructed wash place built by the 2. Pionier Kompanie of the 2. Bavarian Army Corps. 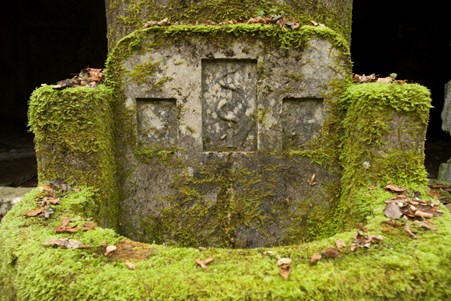 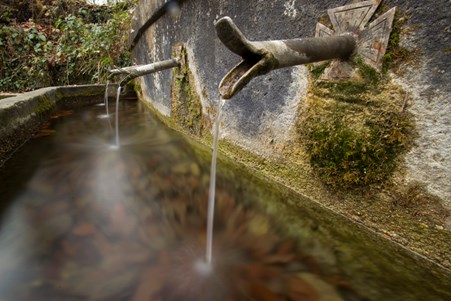 Even more remarkable is the nearby Putter Quelle, another spring where Junger was photographed on 22 September 1917, prior to a trench raid which he describes in great detail in and which still looks today much as it did over one hundred years ago. 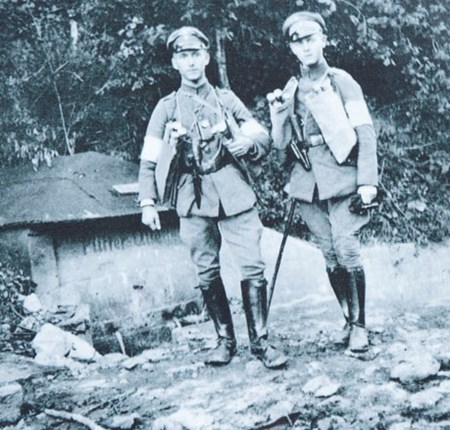 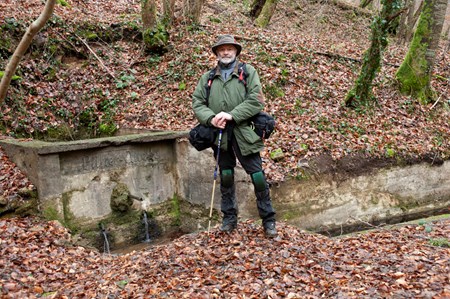 I would suggest that there can be very few other places on the Western Front where one can put together an exact written description, together with a contemporary photograph and which today is virtually unchanged.

Whilst some regions have listed their monuments I am not aware of any definitive catalogue of such memorials and remnants although there is an excellent general book entitled Verstild & Versteend  (‘Weathered Witness’) by Wim Degrande & Patrick Goossens. Sadly, their existence is all too often forgotten but they will all reward the visitor so perhaps it is fitting to end with a unique memorial to the war to be found near Soissons.

Here in September 1914, Sgt. Alfred Brisley, 1st Battalion, Hampshire Regiment carved his regimental badge known at ‘The Cat and Cabbage’ into the rock of his sheltering cave. A few days later the French 45th RI were quartered there and left their emblem until, in January 1915, they in turn abandoned the cave in to the German Prinz Caro Prussia, Grenadier Regiment who, without defacing the work of their predecessors, also carved their own memento. 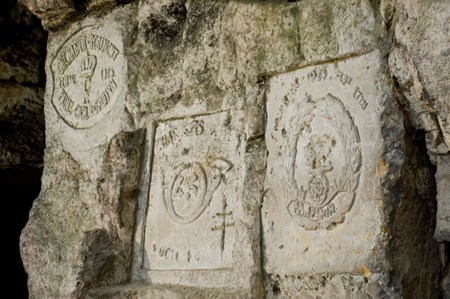 Time is not on the side of these memorials: many are in remote and isolated locations and whilst the victorious rarely consider the vanquished, the quality and creativity revealed by these monuments must surely tell us something about the nature and compassion of the men responsible for these forgotten memorials of the war.

Mike St Maur Sheil MA, FRGS is a photographer who created the series of multi-national exhibitions entitled Fields of Battle, Lands of Peace  and who now regularly guides for Battlehonours Tours.

Further reading
In 1999, a member of The Western Front Association, Barrie Thorpe, who was the WFA's memorial's officer produced a book entitled 'Private Memorials on the Western Front'. The book is long out of print. As Barrie sadly died in 2013, it is felt that the reproduction of this book with the help of new digital mapping will bring this work to a new audience.