Hang on a Minute! Near escapes by RFC/RAF Pilots during the First World War

During the Great War pilots and observers of the Royal Flying Corps (RFC), Royal Naval Air Service (RNAS) and Royal Air Force(RAF) were not provided with parachutes, unless they were crewing observation balloons where the bulky parachutes of the day could be attached to the outside of the basket. Consequently, many lives were lost as crewmembers of stricken aircraft had few options other than staying with the aircraft until it hit the ground. If the aircraft was on fire they might burn to death on the way down. They could of course jump clear, but without a parachute it was a forlorn hope to survive the impact with the ground. Some carried a pistol with the intention of shooting themselves before being forced into any of the aforementioned situations. There were, however, occasions when pilots ‘left’ their aircraft in mid-air and survived to tell the tale.

Raymond Collishaw was a flight commander on 10 Squadron, RNAS, in July 1917.  A Canadian from Nanaimo, British Columbia, he had joined the RNAS in late 1915 and had been flying in France for almost a year.  He had shot down more than 30 enemy aircraft and may have even killed the German ace, Karl Allmenroeder, (30 victories) on 27 June 1917. 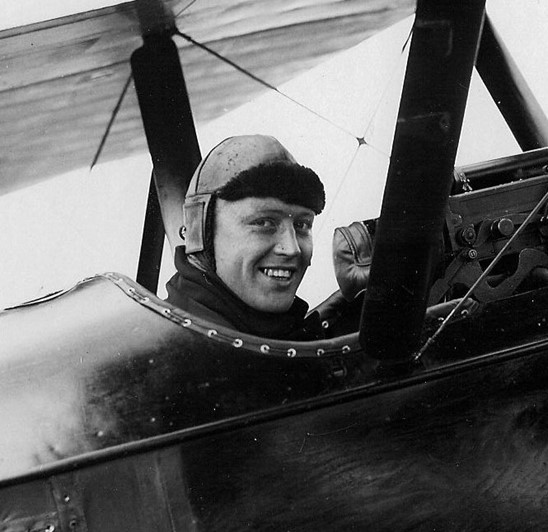 Above: Squadron Commander Raymond Collishaw, in a Sopwith Camel. Photo published in July 1918. This is a scan of a family photo owned by Chris Whealy - used with permission. Title "Collishaw 1918", source: http://whealy.com/grandfather/photos2.html CWM 19930012-308 (O.2860)

On the day in question, he was involved in a dogfight at high altitude where everyone was circling round trying to get on the tail of an enemy machine. The pilots therefore had to keep one eye to the front on their intended prey and the other on their tail to make sure that another enemy machine had not manoeuvred into a firing position. This was exactly the position Collishaw found himself in, but his Sopwith Triplane was able to turn tight enough to get on the tail of one German aircraft while keeping him just out of trouble from another one behind him. In his words ‘things were going very well’ and he had almost got into a good firing position when a third aircraft ‘appeared dead in front, coming straight at me’.  With no time to think about over stressing the aircraft he pushed the control column fully forward and passed just under the other aircraft.  Such was the force of this negative-G manoeuvre that his safety strap broke and he was ejected from the cockpit! He instinctively grabbed the wing struts just in front of the cockpit and was trailing in the slipstream as his aircraft ‘executed a series of extraordinary manoeuvres’ and Collishaw felt ‘like a rag doll as my pilotless Triplane displayed its varied repertoire’. At the point where he didn’t think he could hold on any longer and his arms felt as if they were being pulled out of their sockets, the Triplane suddenly pulled up sharply and slammed the lower part of his body onto the cockpit coaming. He was then able to work a leg into the cockpit, hook his foot around the control column and get the aircraft into ‘more or less level flight’. Finally, he was able to drop back into the seat ‘a more sober and thoughtful pilot than I had been some moments before’. He had begun the dogfight at more than 16,000 feet and by the time he regained his seat he was below 6,000 feet, a fall of almost two miles. 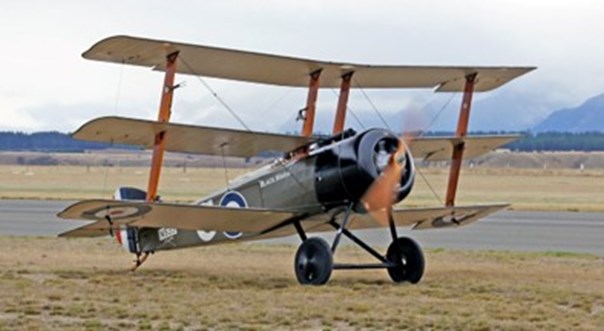 Collishaw survived the war and was credited with 60 victories. He was awarded the Distinguished Service Cross, Distinguished Service Order (DSO) and Bar, Distinguished Flying Cross (DFC) and French Croix de Guerre during the Great War. Post-war he took a permanent commission in the RAF and claimed another victory while flying in South Russia against the Bolsheviks in October 1919.  At the beginning of the Second World War he was commanding the RAF in Egypt and defeated the Italian air force, although the arrival of the Luftwaffe in early 1941 proved a greater challenge.  He returned to Britain in August 1941 and his last posting was as an air vice-marshal commanding 14 Group of Fighter Command.  He was retired in 1943, although still employed as a liaison officer with the civil defence organisations until the end of the war.  He died in West Vancouver in 1976, aged 82.

Remarkable as Collishaw’s story is, there is perhaps an even more remarkable one.

Louis Strange was an experienced pre-war civilian pilot who joined the RFC in May 1914 and was in the RFC’s first contingent to cross the Channel in mid-August 1914. After several months serving on 5 Squadron he was promoted to captain and posted to 6 Squadron as a flight commander. In early 1915 no dedicated RFC fighter squadrons existed but each squadron was given some scout aircraft, as they were called at the time. So, by May 1915,6 Squadron had received a Martinsyde Scout and a Bristol Scout in addition to its quota of BE2s. 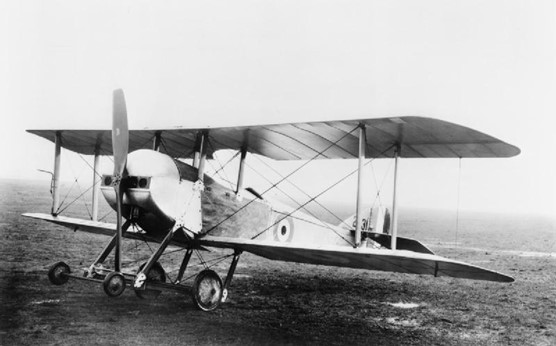 Above: A Martinsyde Scout as flown by Louis Strange in 1915. Royal Engineers official photographer - http://media.iwm.org.uk/iwm/mediaLib//35/media-35712/large.jpg This is photograph RAE-O 599 from the collections of the Imperial War Museums.

Louis Strange flew the Martinsyde Scout on many occasions but had a rather unhappy relationship with it. On his first sortie a lucky shot from a German plane ruptured the oil tank.  Louis knew he’d been hit by the thump as the bullet struck but as all the controls still worked and the engine was running he didn’t worry too much.  However the aircraft became increasingly tail heavy and he couldn’t prevent it stalling, going into a tail slide and entering a spin.  He fought for control as about 10 gallons of oil slopped around in the fuselage affecting the centre of gravity; the Martinsyde was an unstable machine with ‘the elevator control... none too good at the best of times’. Just as he regained control the oil-starved engine seized!  Now, unable to get the aircraft into a stable glide, he side-slipped in from 3,000 feet and put the Martinsyde down on a very narrow track between rows of hop poles.

His next escapade in the Martinsyde was even more hair-raising. During a dogfight with an Aviatik at 8,000 feet Louis emptied the drum of the Lewis gun that was mounted above the top wing. When he reached up to change it he found it jammed and, unable to get sufficient leverage with one hand, he partly loosened his seat belt and stood up while holding the control column between his knees. He was wrestling with the drum, spurred on by bullets from the Aviatik passing uncomfortably close by, when his knees inadvertently lost their grip on the control column. With the aircraft already climbing at its maximum angle it stalled, flicked over and hurled him from the cockpit. 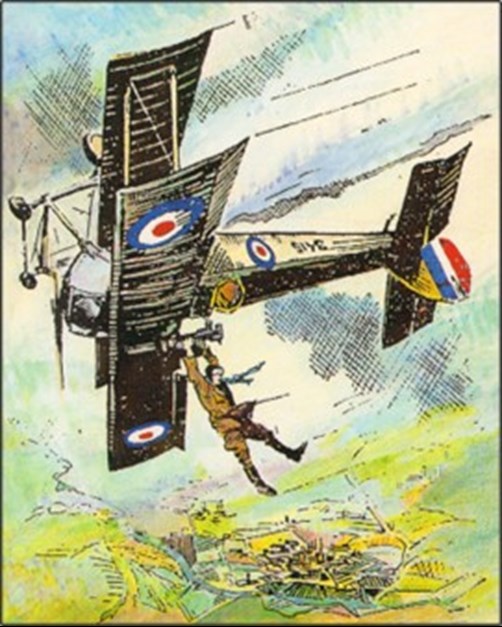 Above: From the cartoon series in 'Top Spot'. An illustration of Louis Strange hanging onto the jammed Lewis gun drum.

He now found himself hanging in the air beneath his inverted aircraft, clinging onto the jammed Lewis gun drum, which might free itself at any moment. After a few seconds he made the decision that he must risk letting go with one hand and grab something more substantial. He succeeded in grabbing one of the centre struts with one hand and then with the other, but his troubles were far from over as the aircraft was still going down in an inverted flat spin and he could see the ground getting inexorably closer. He then somehow managed to swing one foot up into the cockpit, followed by the other, and got the control column between his legs again. Miraculously, he then righted the aircraft and landed back into his seat.

This, however, was still not the end of his problems as he had dropped into the seat with such force that it shattered and he was left sitting on the floor of the cockpit with the flying control cables jammed beneath him. So, to free the controls, Louis had to brace himself against the rudder bar and the edge of the cockpit while reaching down to remove the wreckage of the seat and throw it overboard. After finally regaining a reasonable degree of control he pulled the aircraft out of its dive and managed to clear the trees on the Menin Road ‘with very little to spare’.

After a year on the Western Front, Louis returned to Britain to undertake a number of training roles where his disdain for bureaucracy saw him getting the job done, but often at the risk of upsetting the authorities.  For example, while at Hythe running aerial gunnery courses, the tented accommodation was washed out, so he just took over nearby boarding houses. When he needed a rifle range he took over the local golf course, and when he needed transport he requisitioned buses as they arrived from Folkestone – all done with much charm but no authority. He returned to France in 1918 as a Lieutenant-Colonel commanding 80 Wing and flew on many of their missions. He was awarded the DSO, DFC, and Military Cross, along with three Mentions in Dispatches during the Great War and remained in the RAF until retiring through poor heath brought on by his war service in 1922. He returned to the family farm for several years, before resuming his interest in aviation with civilian aircraft companies.  He rejoined the RAF early in the Second World War and had an equally adventurous time, despite his age (he was 48 in 1939). He was awarded a second DFC in 1940 for flying an unarmed Hurricane back from France as the Germans advanced on Dunkirk. He had never flown a Hurricane before, and it was about twice as fast as anything that he had flown previously.  On the way back he was fired on by anti-aircraft guns and then bounced by six Messerschmitts, only escaping by getting down low as they ‘chased me up the village street and down the chateau drive and almost through the chateau front door’.

Louis Strange died in 1966 at the age of 75. He is arguably the greatest British pilot of all time – his achievements through both world wars make those of some of the much-better known ‘heroes’ seem almost inconsequential. Rupert Smith-Barry, another aviation pioneer, and no slouch in the bravery stakes, considered Louis Strange ‘the bravest man in the world’. The book Flying Rebel tells his story and is thoroughly recommended, but if that Lewis gun drum had come loose in 1915 it would have been a rather thin volume! 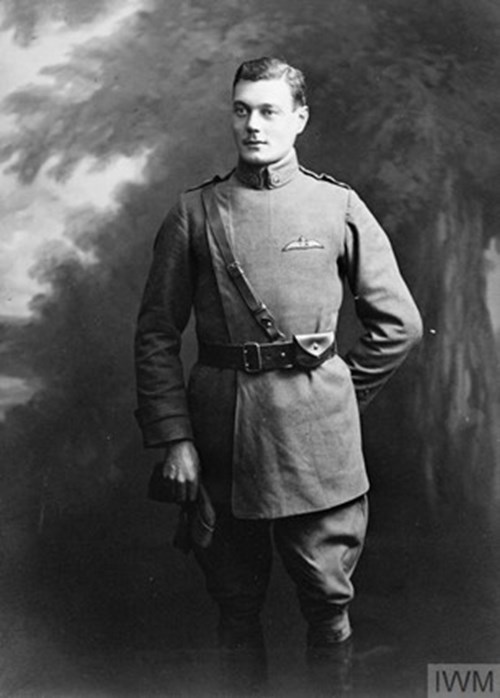