The Camera Returns No.26 by Bob Grundy and Steve Wall

[This article first appeared in Stand To! No.44 in September 1995. Members receive the magazine three times a year and have access to the entire archive.] 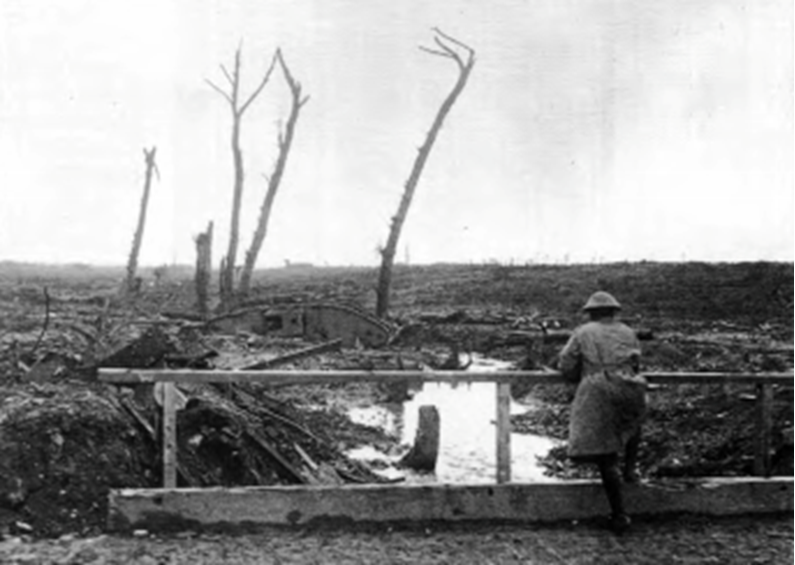 Views of the battlefield after the third Battle of Ypres, 1917. A soldier look across devastated country near Ypres showing a derelict Mark IV Tank, shell-splintered trees and general battle detritus, 15 February 1918. © IWM Q 10709

This is one of the three photographs used to illustrate an article by Peter Arscott in Stand To! No. 37 in the Spring of 1993, which related the exploits of G Battalion 1st Tank Brigade at St. Julien on 19 August 1917.

IWM Q10709 was taken on 15 February 1918, six months after the attack on St. Julien. In that photograph, reproduced here, the tank is the Mark IV Male G4 (Gloucester) which on 19 August was commanded by Lt J.D.Williard. Peter Arscott suggested that it could be Lt J.D.Williard surveying the dreary scene.

The crew commander's report tells us what happened: 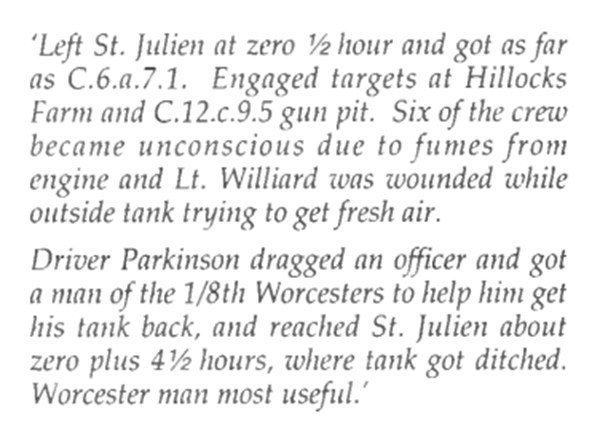 We felt this photograph to be comparable as 'then and now' and set out to find its exact location.

The results can be seen in our comparison taken in May 1993. (The same view in July 2019 is provided by Google Street View).

To find the spot stand with your back to the church on the N70 in St. Julien, cross the road, walk thirty yards in the direction of Ypres, turn to your right and stop. The photograph was taken looking over the fields in a north-westerly direction. At this point the ditch or stream shown in the photograph, which is the Steenbeck, has been culverted for about twenty yards from the road up to the metal barrier shown in our comparison, which accounts for the missing water. A metalled track runs along the northern edge of the Steenbeck, and once past the bushes the concrete bulk of Kasserne 2 can be seen on the left.

This structure was mistakenly referred to as the 'Boilerhouse' in an account of Edward Campion Vaughan's attack on Springfield in ‘Fields of Death’ by Peter Slowe and Richard Woods (Robert Hale 1990, p55).

Further reading: The article by Peter Arscott in Stand To! No. 37 in the Spring of 1993. This relates the exploits of G Battalion 1st Tank Brigade at St. Julien on 19 August 1917.