The Western Front Association (WFA) is delighted to announce that it has secured the safe storage and preservation of a major archive of over six million Great War soldiers' pension record cards.

Some two years ago, the WFA learned that the Ministry of Defence (MoD) was no longer able to retain and manage its archive of Great War soldiers' pension records cards and related archives. The MoD had held these cards, passed to it from prior custodians, all of which date from the time of the conflict.

There was a possibility that the records would have had to be destroyed unless they could be passed for safe keeping to a reputable organisation. The WFA has, in this time, made a study and catalogued the primary information for of each group of records in the archive, and arranged the safe transfer and storage of the records to the WFA's secure premises.

Background to the archive

During the Great War, dependents of each serving British soldier, sailor, airman and nurse who was killed were entitled to a pension, as were those service personnel who were wounded or otherwise incapacitated due to the conflict. There is a card for each. These cards are categorised as follows:

Originally, the cards were maintained regionally and it was only much later that they were collected into a single group. The Pension Records cards were held regionally because many claimants, especially those who were wounded or suffered ill-health aggravated by their service in the conflict, had to attend regional assessment boards to ensure their entitlement remained valid. These assessments created a further invaluable archive, known as the Army, Navy and Air Force Registers, all of which are held in ledger books. These ledgers also record the outcome of assessments.

What do the records tell us?

The key aspect of the records is that, uniquely, they unite genealogical information with military information.

The sample card below (the author's great-grandfather) shows information that is already known from his Commonwealth War Graves Commission (CWGC) entry, ie that George was killed in action in Salonika whilst serving as a Lance Corporal with the East Yorkshire Regiment. What is not known (unless the family had retained it) is his date of birth (CWGC records show age), his address and the names and dates of birth of his five children. These latter items are important to unite other records such as census and parish records. 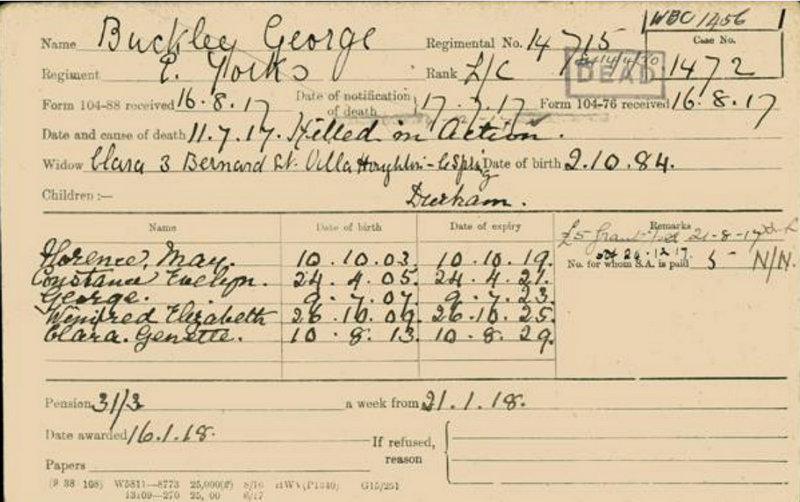 Note the £5 grant on 21/8/17 and the sum of 31/3d (£1.56) per week awarded to Clara, his widow, reducing as each of George and Clara's children later passed the age of 16.George Buckley's card information, allied with his CWGC record (since he was killed in action) and his Medal Index Card (from a card index already held by the WFA), will now provide the fullest possible picture available of each individual who served (his service record file did not survive the Second World War due to the Blitz).

As important, the records provide information on those who came back, and who were entitled to pension, for which there is often scant detail.

Below is the ledger of the assessment for Lance Corporal William Arnold Ridley. We already know he survived the war since he later became known as Private Godfrey of Dad's Army fame. This record confirms his battalion (6th Somerset Light Infantry) and his address in Bath (14 Manvers Street). It also shows that he received a gun shot wound (GSW) to his left hand. 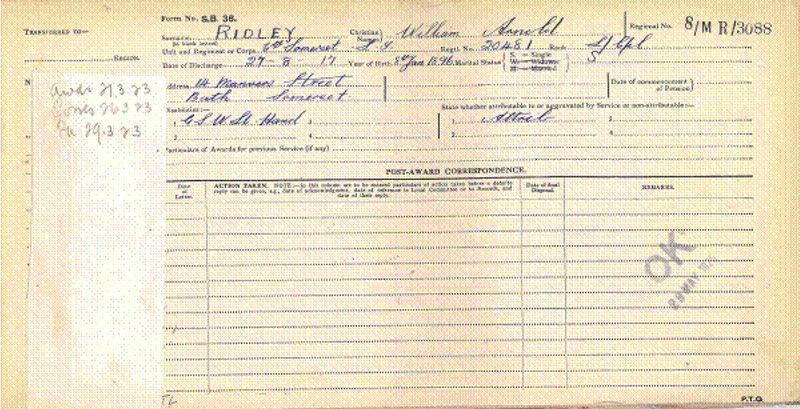 The next example relates to Private William Henry Tattersfield. William survived the war. We can tell from this that William Henry Tattersfield received a Gun Shot Wound (GSW) in the right arm and shoulder. This gave him a 50% level of disablement which later dropped to 40%, so we can evaluate patterns of recovery from certain wounds. Not only are several addresses listed for him, but these records confirm his regiment and regimental number. From this information it should be possible to identify his battalion and then read the battalion's war diary relating to his period of service. 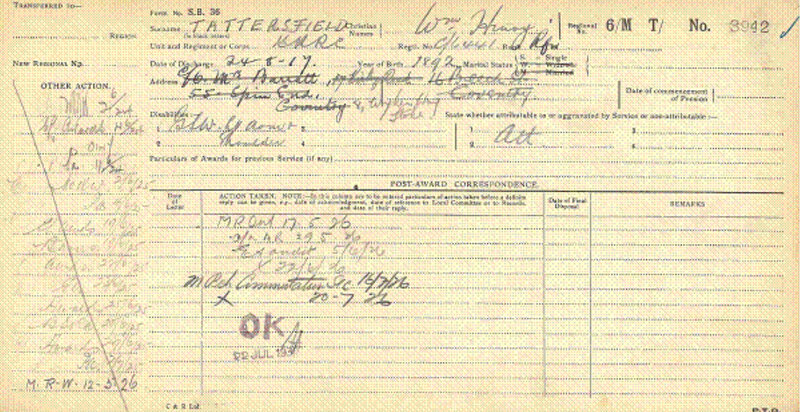 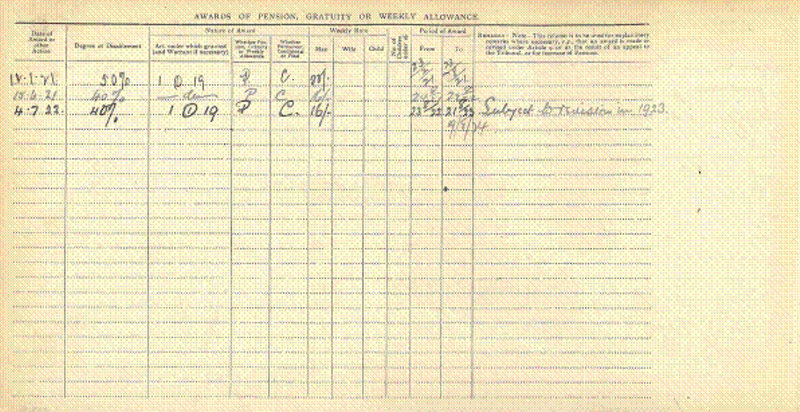 What will the WFA do with the records?

The WFA's aim is to preserve the archive for as long as possible. Included in this is our aim to make the records available to the public for individual family research, to find the records of their forebears and to learn more about their war service. We also believe the Pension Records will be invaluable to Great War historians and for academic research.

In order that the information on the card records can be preserved for posterity, we wish to create an online, searchable archive. We plan to scan the records digitally and to make them findable with a searchable database.

This is a major undertaking, not just to scan every record (a major task in itself), but to ensure each record can be "tagged" with sufficient data to make the search useful.

The WFA intends to determine the best methods of digitisation with archiving organisations, and to discuss potential partnerships to undertake the work. We also intend to seek out sources of grant and other funding for the task, and we will soon launch a fund-raising campaign to help preserve the records in the meantime. Prior to the records being digitised and made available online, we will offer a manual look-up of records through application via this website, in the near future.

Bruce Simpson, Chairman of the Trustees of The Western Front Association, commented, "In this week of Remembrance, less than two years before the commemorations of the Centenary of the Great War begin, the WFA is honoured to be entrusted with the preservation and safekeeping of these important records of those who bravely fought and died in the conflict."

Professor Peter Simkins MBE FRHistS, President of The Western Front Association, added, "These records constitute a valuable resource to both the military and social historian with particular reference to the study of the Great War. Hitherto, the study of individuals has concentrated on those who died, whereas the Pension Records also provide a valuable glimpse into those who survived."

David Henderson, Project Leader for the WFA's Pension Records Archive, said, "Family research is a very popular and compelling pastime for many people. Key to understanding who you are, and your past, is an understanding of the Great War period and the impact that total war made on your forebears, both at the time and in its aftermath. The Great War Pension Records cards will unlock a significant amount of new information for many researchers."