A Sergeant Major's War. From Hill 60 to the Somme by Ernest Shephard 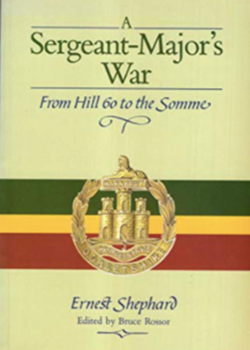 Great war diaries are fairly common, many of them are sketchy and not very interesting but nevertheless get published from time to time. They were often written by Officers but more often by volunteers or conscripts. Only a few were the work of senior NCOs who had been pre-war professional soldiers and this is one of the best. Ernest Shephard joined the Dorset Regiment in 1909 and was promoted Sergeant in August 1914. On the day he left for France, he began to keep this diary and made an entry every day until 31 December 1916, eleven days before he was killed in action. The 18 small pocket books contain about 120,000 words and the entries seem to have been made at the time or shortly after the events from basic notes. After his death they languished unread for 60 years until seen by WFA member, Bruce Rossor who, with Dr R. Holmes has made this selection available to us.

Much of a dull, repetitive nature has had to be left out but we have the report on the fighting at Hill 60 ". . . Wet day. Pte Lurrey was killed at 3am, shot by a sniper while in the trench. We buried him in the woods. We made a sniping post in a tree and had a good time." 15 April: 'Tine morning, snipers busy. The enemy again shelled us heavily in the afternoon, no casualties. Information received through the French troops that the enemy are massing to attack this [Ypres] sector, borne out by information from our own aircraft. The attack is expected tonight. At 6pm we stood at arms after all preparations and orders were issued. Reinforced the firing line. We again stood to arms at 10pm, 12am and 4.30am. On each occasion we gave them rapid rifle and machine gun fire, and a few shells from the artillery, just to show them we were still about . . . Nothing happened, to our sorrow, in fact the enemy responded very feebly to our fire." The description of 1 July 1916 is brilliant" . . . after all, I mustered 90 all ranks, out of 201 who went into action. I lost 111 all ranks. Total casualties in the battalion reckoned as 490 NCOs and men and 20 Officers.  1 lost all my platoon Sergeants and 3 platoon Officers."

A fascinating on-the-spot diary by a man with sufficient grasp of military matters to make a contribution of particular value to the events at which he was present. This book is important and we are indebted to Mr Rossor for having made it available to us. Bob Wyatt