Battle Tactics of the Western Front: The British Army's Art of the Attack 1916-1918 by Paddy Griffith 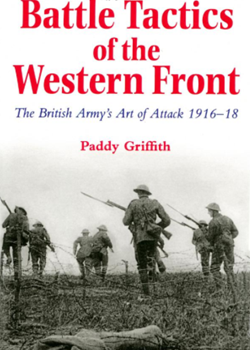 This is an important book. In it, Paddy Griffith lays to rest a whole series of myths about the tactical performance of the BEF in the second half of the war. He turns received wisdom on its head by arguing that in almost every respect, the British army was far ahead of the Germans. In the development of artillery tactics, the Royal Artillery left Bruchmuller standing.

The BEF's 1917 training manual SS 143 was 'in essence a stormtrooper's handbook'. Far from Ivor Maxse creating - belatedly, in 1918, from scratch - a pale imitation of the German system of assessment and dissemination of tactical ideas, the British were carefully digesting their battle experiences and 'teasing out' and circulating 'useful lessons for future practice'. Moreover, tanks, far from being the war-winning weapon that some have claimed, were too unreliable to be used as the spearhead of a major offensive.

Even in 1918, the tank was merely a valuable infantry support weapon, best 'used in penny packets' to assist the advance 'of as many infantry as possible'.

Tactically, by 1918 the British army was a highly effective fighting instrument; its problems of 1916 and 1917 were the result of 'operational, strategic and political failures rather than tactical ones'.

Finally, in the Hundred Days of 1918 everything came together and the Germans were decisively defeated in the field. All of this is, of course, heady revisionist stuff. In fact these views are not as revolutionary as they may appear to the uninitiated, as members of the WFA are well aware, and Griffith gives due and handsome recognition to other historians who have been arguing along similar lines.

As any one who has read any of Griffith's earlier books would expect, his approach tends towards the idiosyncratic, and his style will not be to everyone's taste.

There are some odd stylistic blemishes, such as the use of the anachronistic title 'Brigadier-General'. These are minor faults. Battle Tactics of the Western Front is a highly original work which is light-years beyond the hackneyed 'lions led by donkeys' approach, and will provide an essential starting-point for future study of the British army of 1914-18. Everyone with a serious interest in the BEF should read it.