'If You're Reading This: Last Letters from the Front Line' 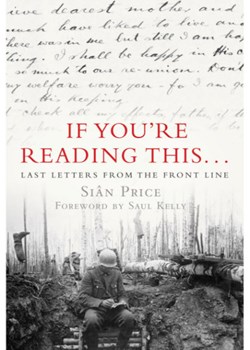 For those readers who wish to gain an understanding of how soldiers feel when facing the prospect of death, this book is worth a read. It is based upon soldiers' letters home and,whilst not a new subject in the library of books dealing with conflict, nonetheless adds some interesting material.

It is not a book just about the Great War but covers a wider canvas, from the Napoleonic Wars to the present conflict in Afghanistan. It is Sian Price's first book; although to be more accurate it is the soldiers themselves who are the authors, with Price acting as a facilitator by providing the link between the soldier's letters and their context. She does this task well. Her contribution is to provide, for each conflict, a short résumé of the war in which the letter writers were fighting. For each individual correspondent she adds a brief biography. In so doing she avoids intruding on the words of the writers but puts their experience into the context of the time. She also avoids dramatising the material but rather uses quotes from various letters home to set the scene and provide the reader with a greater understanding of the thoughts and aspirations of the writers.

The letters used are not restricted to British soldiers but cover other nationalities enabling the reader to see that, despite different uniforms, all soldiers share the same hopes and fears. The writers also come from a wide cross-section of society, from the common soldier joining up to escape the drudgery of the times, to the heir to the French throne, killed during the Anglo-Zulu war whilst 'observing' with the British army. In addition they are written in varying circumstances and the subsequent deaths of the majority of the writers result from a variety of causes from death in battle, from wounds, from disease and even execution for war crimes.

What comes out of this book, the result of research conducted as part of a BBC Radio 4 broadcast, is an excellent anthology of the emotions and concerns of soldiers, from the mundane to the intimate. Some letters are very moving, and one or two stand out for the sheer excellence of the prose. I challenge anyone reading the letter home from Major Sullivan Ballow, written shortly before his death at the First Battle of Bull Run in 1861 during the American Civil War, not to marvel at his use of language and be moved by his ability to succinctly summarise the conflict of emotions felt by soldiers through the ages who, whilst yearning for their loved ones, nonetheless understand they have a responsibility to carry out their duty. Another quote that is striking for the sheer humanity of the sentiments expressed comes from Otto Heinbach, who died from injuries sustained during the Battle of Verdun in September 1916, who reflects on what he might have achieved had he survived, whilst asking for his memory to be honoured but not gilded. Not all the letters quoted were written by soldiers that died but the majority are and this knowledge adds to the poignancy and humanity of the words.

Price, by her observations, is able to bring out the changing attitudes between the soldiers in the 'rag-tag' British Army of Wellington's time to that of the modern professional in today's American and British Armies. For each period considered she provides a summary of the common themes of letters written at the time, thus enabling the reader to make comparisons between the thoughts and ideas prevalent during each period.

For instance, she brings out the Victorian "stiff upper lip" during the Zulu Wars which, despite the carnage of the Battle of Isandlwana, produced no noticeable increase in the number of farewell letters. She also brings out the role of the press during this period, which prompted a new appetite for information and newspapers published letters from the soldiers fighting in Africa, leading to a newfound respect at home for the common soldier, something that remains within our culture more than a century later. The Victorian soldier comes out less emotional, more battle hardened and, perhaps, more positive about survival than soldiers before or since.

In terms of the Great War, Price highlights a common thread of a passion for the cause felt by both sides at the start of the war, all believing that what they were embarking on was just and worthwhile. One reads in the letters a change from this initial wave of enthusiasm and ideas of personal invincibility, as the bloody reality of a war of attrition sunk in. Letters home became increasingly reflective as death became a constant companion.

The letters provide: a reminder of the youth of the soldiers, for most are written to mothers; a strong sense of comradeship; and finally a spiritual element but without any sign that killing the enemy could be in conflict with a Christian belief. Price also highlights the role of the Padre, who would often be the person to hear a man's last words as he lay dying at a casualty station.

Because of the organisation of the book into chronological chapters and further into the individual letter writers, it is a book that lends itself to being picked up and put down as the mood takes one rather than reading from cover to cover. That is not to detract from the quality of the content but rather that it works well as a book to return to from time to time.