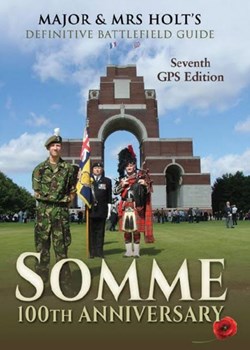 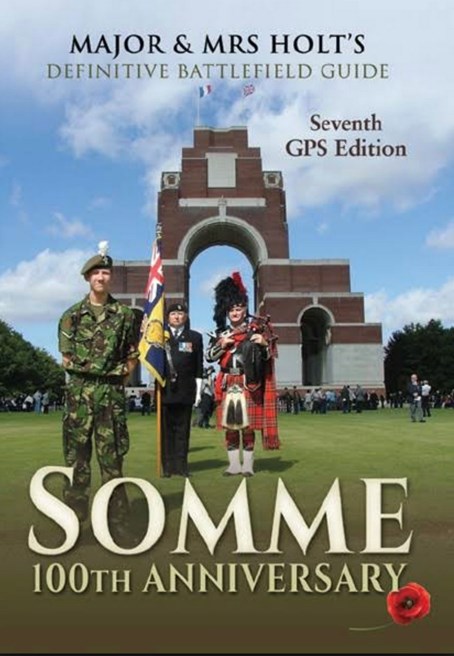 Like many other visitors to the Western Front, for us, there are two essential guides to be packed before any other books go in the case. One is Rose Coombs' "Before Memory Fades", the other is the relevant Holts’ guidebook. Sadly, Rose Coombs is no longer with us but the Holts are still going strong. Tonie and Valmai Holt, or Major and Mrs Holt, as they sign themselves, began organising tours to the Great War battlefields in 1978 and later, having sold their company, started writing guidebooks. Their guides, produced in different formats and sizes, cover the Western Front, the Somme, Ypres and Gallipoli from the Great War, and Normandy and Operation Market Garden from the Second World War. They have also researched and written about Bruce Bairnsfather, John Kipling and postcards. Not content with completing a piece of work, they constantly seek to update and improve to ensure their guides are relevant and up to date. With new information and new developments emerging during the Centenary period of the Great War, this is vital if the battlefield tourist is to have access to as much recent material as possible.

To commemorate the Centenary of the 1916 Somme Campaign, they have produced the Seventh Centenary Edition of their Guide, first produced in 1996. Without doubt this is an outstandingly presented publication. Complete with separate map, the book runs to 350 Pages plus the index. It is lavishly illustrated with photographs and maps and has been brought right up to date with reports on recent events such as the opening of the Thiepval Visitor Centre in June 2015. Very usefully, it also carries GPS locations for all of the major sites and cemeteries.

The book provides a useful synopsis of the battle. It sets the scene well by including detail such as the requirement to build ‘a mini-city’ with the need for ‘7 weeks lodging for 400,000 men and 100,000 horses’ requiring ‘a fifth-seven page memorandum setting out the preparations…’ It is a telling reminder of how fighting battles had changed. They Holts also remind us that this was a Citizen’s Army, newly trained, the bulk of the regular British Army having already been lost.

It is easy to fall into the trap of believing the Battle of the Somme was a one day affair, whereas even acknowledging the 141 days of the 1916 battle does not tell the whole story. The authors here, however, recognise the need to cover the 1918 Somme Campaign, as well as 1916, and to note that there was also fighting in the area in 1917. The casualties from 1918, whilst not outnumbering 1916, were high and need to be understood as does the importance of the ‘Kaiser’s Offensive’ and ‘The Hundred Days’. One might take issue with some of their conclusions, for example the reason for the battle being fought when and where it was, and their view of Haig which seems more critical than most historians, but this is not intended to be an academic book. Readers can research these issues elsewhere and draw their own conclusions. What one cannot fault is the Holt’s attention to detail.

The structure of the book follows their well tested pattern of offering routes through the battlefield to ensure all key places are visited. They also offer walks with clear directions and timings and warnings about conditions. Other useful inclusions are a list of abbreviations, information on military ranks and a step by step guide to planning and enjoying the visit. They also detail the increasing number of museums and information points around the Front which help the visitor understand the battles.

I found their suggestions on approach routes particularly helpful as visitors will travel to the Somme from different starting points and this section enables the visitor to see as much or as little as time permits on their route to the Somme. Thus, visitors on the Eastern Approach could include a visit to Notre-Dame de Lorette and Vimy Ridge, whilst the Western Approach gives easy access to the Chinese Memorial in St Etienne au Mont Communal Cemetery; Etaples with its huge cemetery, all that now remains of the famous (or infamous) Bull Ring; the British Headquarters at Montreuil and Haig’s HQ at Val Vion.

As with their other guides, the Holts offer a series of routes to cover the different parts of the battle and the six itineraries provide that overview. Linked to the pull-out map and the maps in the book, they guide the visitor around the area, highlighting points of interest in the text and are supported by excellent photographs. The GPS references will enable your SatNav to take you unerringly to the places you decide to visit. Inevitably time constraints and particular interests will mean you have to be selective, but the book allows for this, helpfully also indicating how long you are likely to need at each stopping point. Within the itineraries are four suggested circular walks ranging from 20 minutes to two hours in length and which will get the visitor closer to the points of interest.

The first itinerary takes the visitor from Albert to Arras, initially following the Front Lines, with the option of side visits. Although the distance is only 40 miles, they allocate 12 hours for the journey without stops so, if you wanted to follow the complete tour, to do it justice, at least two days should be allocated. Our experience of touring the various Fronts has taught us that it is always better to allocate more time as a) it will avoid rushing and b) sometimes unexpected or unplanned things catch one’s interest. Itinerary two again commences in Albert and covers the area south of the Albert Bapaume road, ending in Pozieres. Included are Delville and High Woods with an optional walk around them. Covering a distance of 39.5 miles, nine and a half hours are allocated but it is likely to take longer. The third itinerary begins in Amiens and ends in Bapaume, taking in the area south of the River Somme. This is a long trip of 75 miles and the Holts advise splitting it. Included is the P’tit Train at Froissy. The fourth itinerary starts south of Peronne and ends at Bapaume, a short trip of 28 miles lasting three hours. The fifth itinerary begins at Villers-Bretonneux and heads south, covering the 100 Days Allied Advance. A journey of 23 miles and lasting eight hours takes the visitor into areas perhaps less well travelled by the Somme visitors. The sixth and final itinerary covering 43 miles and three and a half hours hours again begins in Villers-Bretonneux and heads south, covering the action of Spring 1918 when the German advance almost reached Amiens. Inevitably, as they admit, there is some overlap but any visitor who completes the itineraries will certainly have a good understanding of the area and of the actions of 1916-1918.

The book takes an even handed approach to the combatants and lists cemeteries and memorials from all sides. I have already referred to one of the French cemeteries, and it is certainly worth the visitor visiting one of the German cemeteries such as Fricourt to make a contrast with the Commonwealth War Graves Commission Cemeteries.

The visitor to the Somme will need to draw from the book what they particularly want to see given the time they have available. They will also need to decide where to base themselves and add travelling time to the start points. The Holts provide helpful guidance throughout the book on using French roads and motorways, parking, Tourist Offices and hotels and restaurants. It is hard to believe that this guide could be surpassed for thoroughness and the information available will allow both the new visitor and the experienced one to plan their routes, whilst the level of detail and information makes the planning both easy and a pleasure. As someone who has frequently visited the Somme and knows the area well, the book has highlighted some areas I will want to visit next time we go there.

Review by Malcolm J Doolin, (East London Western Front Association member and author of The Boys of Blackhorse Road. The Story of an Elementary School War Memorial.) With his partner, Eve Wilson, he is a frequent visitor to the Western Front.