Rayford W.Logan and the Dilemma of the African American Intellectual by Kenneth R. Janken (1993) 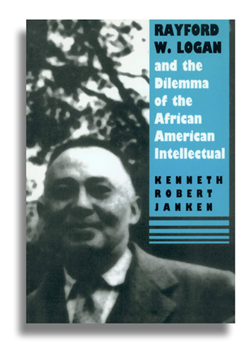 There are several reasons why Americans are not that interested in the First World War: they came to it late, their losses were nothing like as severe as other combatants, there was little negative impact on the home front - indeed the opposite as there was a huge growth in arms manufacturing - and they are deeply ashamed at what they find when they look too closely - that, as the author recognises, ‘the army tried to erase any memory of African-Americans participation in the war effort'. (p.38)

Rayford W. Logan lived through the First World War and having graduated beforehand, a captain no less of his college cadets, he was nonetheless denied a commission in the Army because of his colour. Even though he thought himself as ‘10/16 White, 4/16 Negro and 2/16 Indian’ and could pass as white, he identified as an African-American - and a well-educated classy one at that.

A well-educated diarist, the author Kenneth R.Janken has had quite an archive of papers to use for this biography, not least diaries, a draft autobiography and letters. Rayford W.Logan was many things: an historian and author, Civil Rights activist, ‘politicker’, campaigner, socialiser and basketball fan. He was an associate of some of the better known black leaders such as W.E.B. Du Bois, and is recognised as the person who minted the phrase ‘the nadir’ to describe the position of African-Americans between Reconstruction and the First World War - that period after the honeymoon period for African-Americans that came after the Civil War when there was a significant backlash for African-Americans through legislation, segregation and Jim Crow law

The Chicago Defender newspaper dubbed Rayford Logan -  ‘a bad Negro with a PhD’. Like many African-American’s at the time he preferred the term ‘Negro’ to that of black - as for him it provided a link to his ancestry and the African diaspora - it spoke of heterogeneity. He took the word ‘black’ to be a slur. In part this may be because he was fair-skinned and could pass as white.

Rayford Logan is important because he was present, a witness to, actively engaged in and writing at a defining moment for African-American history.

Born 7 January 1897 in Washington DC he reportedly had, on his mother’s side, a great grand mother - the white Margaret Wittingham and on his father’s a white grandfather. As Rayford put it, he was ‘I am a second generation bastard and relict of the foul slave system that was once one of the worst disgraces of American history’ (p.6) (1) His upbringing in Washington DC was quite different to most African-Americans - there were 100 wealthy African-American families out of an African-American population in DC of 75,000 and his family, if not one of the hundred, was certainly on their fringes. In the Washington bubble he was largely isolated from the kind of segregation and white supremacy suffered and endured to the point of death by African-Americans elsewhere in the country at this time. It was, as he described it, ‘a checkerboardof racial integration of sorts with black and white kids getting along even if being called a ‘nigger’ was met with ‘white trash’ (p.12) As he grew up, the only thing that caused him pain, was that he was unwelcome at social events where he could meet white women.  (p.28)

Rayford was the a Captain of High School Cadets, a valedictorian and a member of the William College Student Army Training Corps yet with American declaring war on Germany he was denied a commission and enlisted 10 June 1917 in the National Guard as a private.

There was, in the Army Command, a deep seated belief in the inferiority of African-Americans, fear of white soldiers would respond to having African-Americans in command and fear of any new self-confidence in African-Americans if they had their own officers. Simply put, an African-American from 1917-1919 fought  a war on two fronts: against his own command and the Germans. African-Americans were placed in segregated units with line officers limited to those below the rank of major - indeed there was considerable resistance, paranoia and vindictiveness against any black officer.  There are many accounts of flagrant uses of force to intimidate black soldiers, as well as summary beatings, executions and even lynching.

‘The war against African-Americans in the military was not only physical - it was ideological and psychological as well. (p.38)

Starting his war in a combat unit and going to the front at Argonne as part of the 372nd Infantry Regiment of the 93rd Division, after an incident in June 1918 during a German bombardment when he threatened a white officer he was declared unfit for service at the front and transferred to the 840th transport Company - a stevedore outfit at Camp Bassens, Ancona, Near Bordeaux.

He was forever ‘cocking a snook’ at white officers and injustices and was caught up in the violence at the receiving end either because he was too white or too black, depending on which group was seeking vengeance against ther other. His army life during the First World War was the catalyst that soured him on America and led him to become an organiser against racial discrimination and for civil rights. (p.37)

21 August 1919 Rayford Logan received a discharge in France and spent the following five years travelling across Europe. These ‘wanderjahre’, as he described them, ‘taught me … that differences in nationality, language, religion, and traditions created as many intra-racial problems as did Negro-white relationships in the United States’. He travelled extensively between France, Germany, Poland, Austria and Spain. He returned to New York December 1924 on the US Steamer George Washington.

The remainder of the book covers his life and political activism.

Another insight into the African-American experience, albeit a combat soldier whose front line experience can be counted in weeks or even days, it nonetheless adds to the evidence that the AEF from the top down, with the US President as the Commander in Chief setting the tone, was openly discriminatory.