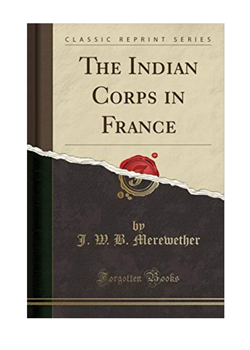 [This review first appeared in Stand To No. 49 April 1997. It is now one of over 2,200 reviews of books on the First World War available to search by members of The Western Front Association through our digital archive].

This work was first published in December 1917, and was reprinted twice in the following year. There was also a second edition in 1919. There were also Indian editions in English with Indian dialects. The second edition contained what the authors referred to as 'a large number of important alterations and modifications', and they were satisfied that 'later research can add very little to the account as it is presented...' They admitted that they had not been able to examine everything so the book remains, essentially, a restricted contemporary account without much of the information being released being available to them. In spite of these restrictions, the history has long been highly regarded, and second-hand copies of it have been difficult to obtain.

Now Naval & Military Press has produced a fine reprint of the 1918 second reprint, which has ten fewer pages of text than the 1919 second edition. However it does include a fine index. The book is very well produced, and is a straight reprint without an introduction (which might have been quite useful), and is reasonably priced.