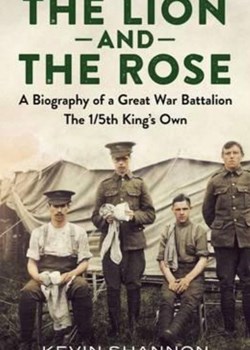 The 1st/5th Battalion The King’s Own Royal Lancaster Regiment 1914-1919, is impressive. The majority of those who joined the 1/5th Territorial Battalion came from Lancaster, Morecombe, Blackpool and Fleetwood. They were very much ‘family’, many closely related with no less than seven father and son pairs. The author’s narrative follows the battalion through many of the fronts from March 1915 in Flanders drawn from war diaries, earlier histories, letters home, newspaper reports and diaries. recording places as soldiers became casualties or were decorated.  The book contains what is said to be the fullest battalion roll ever published. It lists soldiers by name, rank, number, medals awarded, casualties, date of death of no less than 3,500 to provide an invaluable source of information to researchers and medal collectors.

The book contains a range of valuable statistics: 63% of the men became battle casualties, 24% were killed or died, 3.2% suffered from shellshock (PTSD), 2.7% from trench foot, and 6.4% of all the men caught Trench Fever. There was a much greater chance of newcomers becoming casualties: 61% within three months of getting to the trenches against only 6% after having a year’s experience.

An analysis of activity shows 3% of the time overseas was spent travelling, 28% rest and training, 36% in reserve and 33% in the front line. This detailed history shows what can be done by a dedicated writer -  Kevin Shannon is certainly one and we are indebted to him for sharing his research with us. 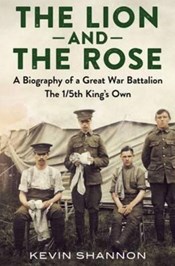