Torchbearers of Democracy. African American Soldiers in the World War I Era by Chad L.Williams (1) 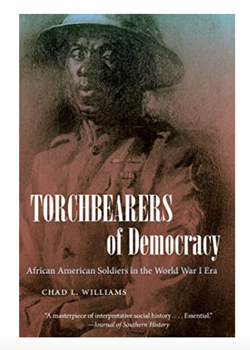 The war inspired the optimism of many African Americans.

This is an important, distinctive and scholarly articulation of an important confluence of people, behaviours and events that has had repercussions throughout the 20th century

When African American’s volunteered to serve, or received the draft, during the First World War they did so against a background of Jim Crow segregation, state sponsored suppression, fear, injustice and violence. Their hope was that by showing they could serve in France ‘in defence of democracy’ as citizens and men under the United States flag that on their return they would be given greater freedom, more opportunities and protection under the law. Far from it, returning uniformed African Americans faced even greater, violent suppression and injustice.

The American Army Command were unwilling to countenance any opportunity for an African American to give orders to a white soldier, let alone serve along side him other than in a subservient or labouring role. On American soil African American soldiers were dispersed rather than training together so that they were always outbumbered two to one, white to black.

Britain were complicit in this as the 92nd Division, comprising African American troops would have been  trained by the BEF but for the intervention of Minister of War Lord Milner,  a committed white supremacist, objected. (p.121) After all, colonial black South Africans had been limited to labour, so men other men of African descent could hardly been seen baring arms.

The African diaspora and the First World War is a story of West and East Africans, South Africans, Sub-Saharan or Central Africans, as well as African Americans or British or Caribbean Africans - together forming a diverse African descent dispersed from their original homeland and scattered throughout the globe as a result of various streams of movement and resettlement .