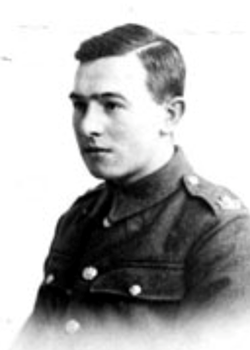 Parents, Fenton (a foreman at a woollen cloth manufacturer) and Ann Eliza Whiteley, at the time of her son’s death his mother was living at 273 Scout Hill, Wesbury.

At the 1911 Census, the family of seven lived in a 4 roomed dwelling in Ravensthorpe. Jack's four older siblings all worked at the mill in various jobs as heaters, weavers or menders: Jack was still at school.

At 8.45am on Tuesday, 9 April 1918, after a 4½ hour artillery bombardment, 14 German divisions attacked on a front of 12 miles, aiming at capturing Hazebrouck with its vital rail junction. This was the German 'Georgette' offensive and was the Germans' last ‘best chance' to win the war.

The following day a further series of attacks were made by the Germans, forcing the abandonment of the Messines Ridge and the town of Armentieres on 11 April. It was on 11 April that Haig issued his now-famous ‘Special Order of the Day', which included:

"...There is no other course open to us but to fight it out. Every position must be held to the last man: there must be no retirement. With our backs to the wall and believing in the justice of our cause each one of us must fight on to the end."

It is unlikely that Jack Whiteley would have heard this message as he was killed on this day.

Jack Whiteley was born in about 1899 to Mr and Mrs Fenton Whiteley. He was sent to France in March 1918, joining ‘B' Company of the 1/6th Battalion, Northumberland Fusiliers (part of 50th (Northumbrian) Division). The War Diary of the division's 149 Brigade (made up of the 1/4th, 1/5th and 1/6th Northumberland Fusiliers) states that the brigade ("400 all ranks") was relieved on 1 April, moving to the town of Lillers. There, the battalions were made up to strength with men drafted from home. It is likely that Jack was with this large group of reinforcements. From Lillers the division moved north to Merville.

At Merville, on 9 April (the opening day of 'Georgette'), the 1/6th Northumberland Fusiliers was ordered to be prepared to move at short notice, probably to support the 40th Division who were holding the line astride the River Lys. At 7.30am the battalion, together with the 1/5th Northumberland Fusiliers, were moved up to Le Trou Bayard, a small village east of the town of Estaires. From there, a series of small moves were ordered, but no contact was made with the Germans. The situation must have been very confusing for the battalion and brigade commanders, with reports of German advances and the sound of heavy fighting nearby.

On 10 April, nervous of being attacked from the south, where the Germans had broken through, the 1/6th Northumberland Fusiliers was instructed to form a defensive flank facing the line of the German breakthrough. At 7.15am the battalion was ordered to attack and retake Estaires which had fallen into German hands, and they were successful in regaining most of the town. The battalion was shelled for the rest of the day, incurring heavy casualties, and it was forced to give up part of Estaires that evening.

On Thursday, 11 April, the 1/6th Northumberland Fusiliers was placed into brigade reserve. Despite this, there was to be no rest for the men. At 7.00am a report arrived to say that the Germans had occupied Le Trou Bayard, and the battalion was therefore ordered to move forward. By 1.50pm the battalion's advance had been halted and, due to German pressure, was being forced back. The battalion was in serious trouble. With an open flank to the right, the brigade (according to its diary) "...seemed to be in touch with the 29th Division on the left." A verbal report that Neuf Berquin (a village north west of Estaires) was in the hands of the enemy put in doubt the existence of troops on the left. At 11.00pm that evening, after consulting with brigades from the 29th Division, 149 Brigade fell back to Vierhoek.

Further withdrawals proved necessary on following days, but in this confused fighting, the 1/6th Northumberland Fusiliers lost (according to Soldiers Died in the Great War) 98 men. One of these was Jack Whiteley.

No obituary appeared for Jack in the local newspapers; there was, however an appeal in January 1919 by his parents who lived at 273 Scout Hill for information concerning their son. Presumably he was still officially "missing" at this stage, which must have been very difficult for his parents.

Jack has no known grave and is commemorated on the Ploegsteert Memorial to the Missing. This Memorial, in southern Belgium, lists the names of 11,500 soldiers killed in the area throughout the 1914-1918 period who have no known grave. 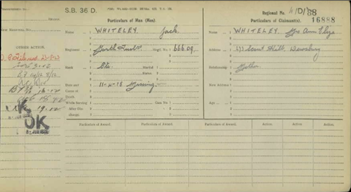