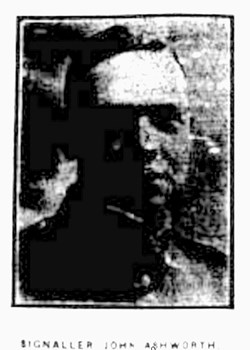 Enlisted on his 18th Birthday

37152 Signaller John Ashworth died of his wounds on this day

John Ashworth was born in the spring of 1898 to Joseph and Margaret, 46, Cleaver St, Burnley, Lancashire.  By the time of the April 1911 Census, and still only 12, John was a part time weaver while still attending school. There were 7 in the family, living in the 4 rooms of 84 Waterbarn Street, Burnley.