The day my family came

The 20th August 2013 was a hot day. Probably not as hot as the 20th July 1918. Despite these dates being separated by nearly 95 years, the echoes of that day in 1918 resonated loudly down the decades. It was on that day that a soldier’s family returned to Marfaux, near Reims.

Leonard Maidment, from Andover, was probably an ordinary soldier. It is likely he was good at his job as he had been promoted to Serjeant despite being only 22 years of age. A pre-war territorial, he had served from 1914 in India, probably also in Mesopotamia, and had seen action in Palestine. It was only in the summer of 1918 that his unit, the 2/4th Battalion, Hampshire Regiment, was sent to France, joining the territorials of the 62nd (West Riding) Division.

Taking part in the attack on Marfaux on 20 July, the Hampshires suffered fatal casualties of one officer, one Serjeant (Leonard), a Lance Corporal and 24 Privates. For 95 years eight of these men, including Leonard Maidment  had no known grave and were commemorated on the Soissons Memorial to the Missing.

By chance, in 2004, I paid a visit to Marfaux British Cemetery and, walking through the rows of headstones, noticed one that marked the resting place of an unknown Serjeant of the Hampshires who was killed on 20 July 1918. After investigation and representations to the MoD agency (SPVA), it was agreed that this could only be Leonard, and that a new headstone would be put in place. The results of this – nine years later – was the ceremony held on 20 August 2013. 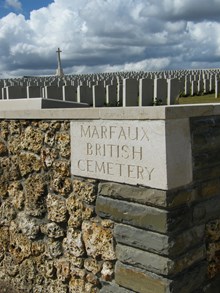 So many times the phrase “the first of the family to visit” is heard, but on this occasion there could be no doubt that no members of the family had previously stood by Leonard’s grave to pay their respects. Under the hot mid-day sun of the late summer day, Leonard’s great nephews and their wives gathered in the cemetery. Leading the family contingent was Keith and Linda who had travelled all the way from Australia, where they now live. In addition Michael and Wendy came, although from not as far, they still live in the South of England and David Maidment, who also lives near Leonard’s home town. 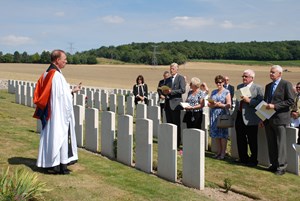 As the tractor gently chugged away in the field nearby small groups of family, regimental representatives, CWGC and SPVA officials and others mingled and chatted. A group from the village, led by the mayor, Frederic Dechamps, arrived and at 2pm the Chaplain, Revd Dr Simon Bloxham-Rose gathered the five members of the Maidment family around the new headstone and read out the opening prayer, giving thanks for the life of Leonard.

Following the 23rd Psalm, Lt-Colonel James Murray-Playfair, the Military Attaché from the British Embassy in Paris read Rupert Brooke’s “The Soldier”, which includes the famous line about there being some corner of a foreign field that is forever England. 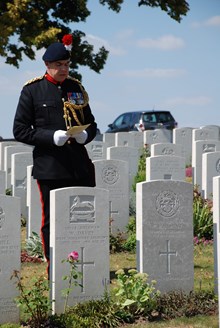 After a reading by Lt-Col Rose, Keith Maidment recited a poem entitled The Day my Family Came. The appropriateness of this, in view of the circumstances made this reading extremely poignant, so much so that Keith was unable to complete the reading. 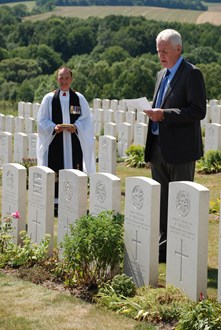 The Day My Family Came By Michael Edwards

I half awoke to a strange new calm

And a sleep that would not clear

For this was the sleep to cure all harm

And which freezes all from fear.

Shot had come from left and right

With shrapnel, shell and flame

And turned my sunlit days to night

Where now, none would call my name.

Years passed me by as I waited,

Missed the generations yet to come,

Sadly knew I would not be fated

To be a father, hold a son.

I heard again the sounds of war

When twenty years of sleep had gone,

Till peace once more at last had come.

The stones and trenches to explore,

But no-one ever called my name

So I wished and waited ever more.

Each time I thought, perhaps, perhaps,

Perhaps this time they must call me,

But they only called for other chaps,

No-one ever called to set me free.

Through years of lonely vigil kept,

To look for me they never came,

None ever searched or even wept,

Nobody stayed to speak my name.

Until that summer day I heard

Some voices soft and strained with tears,

Then I knew that they had come

To roll away those wasted years.

Their hearts felt out to hold me,

But they had come just me to see,

Drawing me back home with them.

Now I am at peace and free to roam

Where 'ere my family speak my name,

That day my soul was called back home

For on that day my family came.

The address, by Dr Bloxham-Rose was on the theme of Leonard recognising a modern soldier’s life and habits, even though so much time had passed since Leonard was killed.

The ceremony then moved towards its focal point, the act of remembrance, including the lines from Binyon “They shall grow not old, as we that are left grow old”.

The Last Post and the two minutes silence that followed allowed everyone to reflect on the events of 95 years ago and the reasons for the gathering. No machine guns barked, only birds in the trees on the slopes above the cemetery could be heard. No artillery fire or shrapnel bursts were heard, just the distant tractor still working its way across the fields between the cemetery and Marfaux village, where, 95 years ago, there had been so much blood spilled. 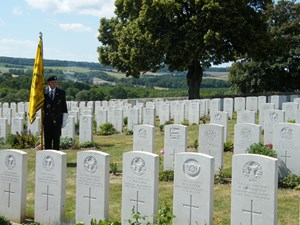 The Reveille brought wondering thoughts back to the present. The notes from the bugle died away and this signalled the start of the wreath laying. The family members planted wooden crosses at the foot of Leonard’s new headstone. 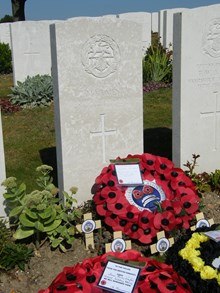 Lt-Colonel Murray-Playfair laid the first wreath on behalf of the British Embassy. Next was a strikingly bright yellow and black wreath with the famous ‘Cat and Cabbage’ emblem at its centre – this was laid by Lt-Col Colin Bulleid, of the Royal Hampshire Regimental Trust on behalf of Leonard’s Regiment. Finally, on behalf of The Western Front Association, I laid a wreath, ending the nine year marathon.

Prayers were then said and a Collect was read by Lt-Col Bulleid. There followed the Lord’s Prayer and the final blessing by Dr Bloxham-Rose. 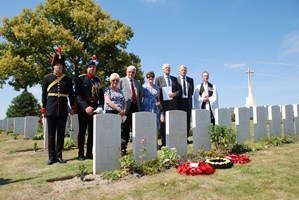 The two dozen or so in attendance were invited to go to the local village hall by the Mayor who had laid on a buffet. Sue Raftree from the SPVA and the Colin Bulleid from the Regiment presented the mayor with plaques. Two framed photos of Marfaux being retaken by British troops in 1918 were given to the Mayor, Frederic Dechamps, on behalf of WFA and a – to everyone’s amusement, a Boomerang was presented  by Keith Maidment. After this, a series of speeches were made. This was thirsty work for everyone, so with some relish the chilled local champagne was cracked open, which was truly appreciated. 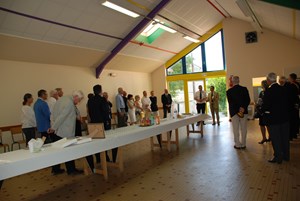 It was a day that will live in the memories of all who were present, and a remarkable event to acknowledge just one soldier who gave everything for King and Country who is now at last honoured with a known resting place.