1914 Days of Hope by Lyn Macdonald 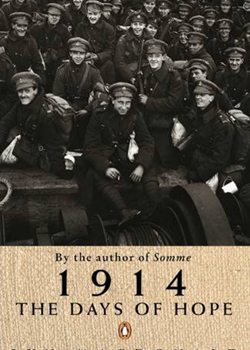 In this latest in her series of books on the Great War the author has retained the style and format which proved so popular with her earlier works, as undoubtedly will be the case with this one. It may not be to everybody's liking but it has resulted in a graphic, interesting and very readable account of those first months of the war. These were stirring days.

It was the first appearance of a British army on a European battlefield for almost a hundred years and it was the ultimate sacrifice of arguably the most professional and best trained army Britain has ever sent to war, and Lyn Macdonald's treatment has done it justice.

There is some fine descriptive writing, particularly covering the retreat from Mons when the extent of the men's exhaustion and suffering is fully brought home to the reader. At times the narrative reads like the report of a war correspondent from the battlefield enhanced by the accounts and memories of participants. These personal memories of both soldiers and civilians make fascinating reading and are skilfully interwoven into the story. The maps are clear and uncluttered, but it is a pity that some sense of false economy has reduced a number of them to so small a size; maps are life blood to books such as this. There are one or two errors that escaped editing: there was no Guards Division in 1914, it was formed in August 1915; the German 1st Corps was on the Eastern Front and not in von Kluck's First Army; the London Scottish was the first Territorial unit to embark for France and not the Oxfordshire Hussars (who followed six days later). Of more significance is the confusion between the two battalion COs who attempted to surrender at St Quentin. It was Lt Col Elkington (not Ellington), CO of 1st R Warwicks, who served in the Foreign Legion and was reinstated. His DSO was gazetted on 28 October 1916 and his name reappears in the Army List of that month (it had disappeared in October 1914) with seniority as before. After going on half pay in February 1918 he retired on 1st July 1919.