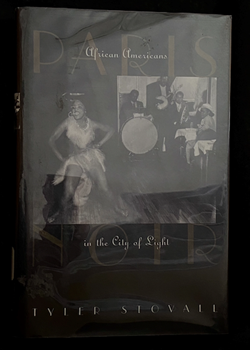 Tyler Stovall's motivation is that of so many who researches and writes about the First World War, Tyler Stovall’s grandfather served in World War One. Paris Noir spans several decades with the First World War the kickstart to the appearance in France of many African Americans eager to enjoy freedoms and civil treatment that was rare in their own country at the time.

The drive of ‘Paris Noir’ is towards the jazz age and how Black GIs who came to France and stayed laid the foundations for the creation of a vibrant African American community in Paris after the war.

Tyler Stoval tackles the dilemma faced by African Americans at the time who were being encouraged to fight for ‘their nation and democracy’ while at home they suffered segregation and often brutal racist attacks.

‘Black America as a whole remained trapped by virulent white racisim and grinding poverty at the bottom of American society’. (p.2)

African Americans ‘learned from an early age that failure to observe the expected deferential posture in public would be met with savage reprisals.

Even before the War created its own disruptions tens of thousands of African Americans were migrating north for work and to escape the worst oppression on the south of the country. Though here too they could find they were still ‘victimised, oppressed and excluded from mainstream American life. (p.3)

Why would African Americans come forward in their hundreds of thousands to fight for a country that treated them so badly? The answers lay in the hope that self-sacrifice and the clearest demonstration of their worth to their country would change hearts, behaviours and legislation ‘to win the respect of a nation that had always treated them shabbily’, Tyler Stovall describes it as ‘paradoxical and deeply tragic’ not least because treatment of African Americans in uniform by their own Command was dreadful - banned from joining the Bastille Day Victory Parades in Paris in 1919 and too often, once home, picked out and picked upon by ungrateful white supremacists - indeed lynchings reached an annual peak immediately after the war.

Far from being color blind the French looked at African Americans through a ‘haze of stereotypes’ writes Tyler Stovall (p.17) but at least when the French saw the discriminatory communiques sent out to Mayors from the AEF Command warning and advising them how to treat Blacks they responded by destroying such papers and ignoring the advice. African Americans were made to feel welcome and in do doing get a taste for a sort of utopia where the ‘color line’ no longer existed.

The author is keen to get on Jazz and it is the 44 piece Jazz band of James Reese Europe of the New York 369th Infantry that sets the stage for the rest of the book. The band toured Nantes, Angers, Tours and Aix-Les-Bains. In August 1918 they even played at the Theatre des Champs-Elysees, Paris in front of President Poincaré. It is this opportunity, the creative and performing arts especially, which is treated through the rest of the book as we touch on the lives of Miles Davis, Charlie Parker, Sidney Bechet, Cole Porter, Josephine Baker and the most contemporary of artists - Jean-Michel Basquiat

‘Paris Noir’ is a tour de force across much of the 20th century with Paris and the contribution on its culture of  African Americans.

The History of Jazz in Paris