Quentin Roosevelt; A Sketch with Letters (and poetry) 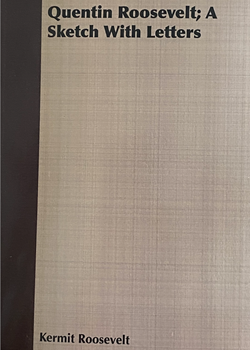 From the start there is a sense of tragedy; you know that this is a collection of letters sent by someone serving in France who is going to die. It is rather like watching the film ‘All Quiet on the Western Front’ - you know that it ends with a shot and the protagonist’s death - though in the case of Quentin Roosevelt it was reportedly two shots through the head while fighting off three German aeroplanes that ended his war and his life. Like ‘All Quiet on the Western Front’ a great deal is learnt about what goes on behind the lines. In the case of the 20 year old Quentin Roosevelt he is a white American, with money and contacts, who is able to take a motorbike or even fly his own plane up and down France. Often he is on a mission to secure supplies for his depot, at others he is visiting family or friends.

The letters are full of joy, ambition and optimism. They were mostly written to his older brother Kermit, but also to his sister Ethel and to his father. What comes over is Quentin’s love of people and a humble, non pushy way of getting on with the job in hand, no matter what it was, and no what who he was - the son of a former US President. His way with men, his ability to get through the red tape and secure supplies first for the truck depot he ran, and then at a training airfield, had his superiors eager to keep Quentin away from a combat role.

Though a collection of letters this is an easy read with a clear and completed beginning, middle and end which provides an insight into the life, times and death of a young American transport officer, flying instructor then fighter pilot. The frequency of Quentin's excitable and detailed letters to his older brother Kermit could have as easily been the first draft of a memoir, taken almost verbatim, had Quentin survived. He lived life to the full and had the money for motorbikes, cars and planes while in his late teens and early twenties, knowledge France from previous visits and as the son of former President of the US, his name carried a little weight and influence no doubt.

A little infill is provided between the many letters Quentin wrote home from France in 1917 and 1918. These were written for the most part to his brother with one or to letters also that he wrote to his sister and father (though never to his mother). In the opening pages we are introduced to Quentin, the youngest child of President Theodore Roosevelt, who was only a 4 year old boy when the family were living in the white House. (1901 to 1909)

After Groton, age 19 in the fall of 1916, Quentin was off to Harvard. He lasted a single term. Early the following year, however, he was intent on getting to France, ideally in a combat role, as soon as possible. He did get to France, working in the transport section as an transport officer, from April 1917.

From his letters home we get a candid, on the spot view of France and the Western Front behind and above the lines from the perspective of a privileged, ebullient and gregarious 'man's man' - Quentin had a knack of getting the best out of others and was held in jobs where he excelled: for example, running over 50 trucks out of a supply depot, helping to set up one of the first AEF aerodromes and once he had passed through with flying colours - running a flying school, and all of this age just 20 and why his seniors wanted to keep him in these roles. He had a reputation for tackling tough tasks that required ‘sensitive handling’, for example getting around the issue on one occasion where a pig-headed captain in stores blocked a requisition of boots - Quentin ordered the boots himself and took a man and two trucks out to go and collect them.

He craved to fly in combat and if not with the American Air Force, then with a French or British Squadron. The son of a president with an excellent reputation he could pull strings to get the posting he wants, but this took time. His ability to get things done was so great that his seniors were loath to lose him. His men were sad to see him go too when he finally got his way. A star pupil through flying school and in target practice and practice dog fights it wasn't long before he got into scraps over the German Lines.

Inevitably, and we feel it with growing dread as we read the book, we know he will be killed. Just a month into a combat role, with one 'victory' to his name, he finds himself set upon by three German planes flying an inferior machine and he is shot down. He also describes on several occasions how men went missing, their final hours and how they were remembered, as well as the burials of French Ace Guynemer and German Ace Baron von Richtofhen which were marked with 'full military honours', so foreshadowing how he,  Lieutenant Quentin Roosevelt, would be honoured inside German lines when buried by the Bosche, and how he would be celebrated again a few weeks later by his own side once the German lines had been over run.

If ever a 'great life' not led could be hinted at, here it is. Close to his brothers and sisters, a keen and frequent letter writer, they are published here to give a remarkable insight to life behind the lines over the 11 month period he was there before his death