Retreat Hell! We Only Just Got Here! The American Expeditionary Force in France, 1917-1918 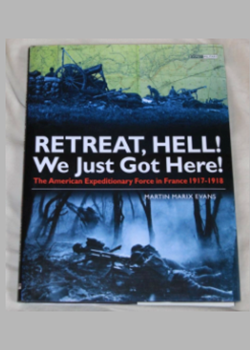 I have always thought that the distinction sometimes drawn between 'popular' and 'academic' history is unhelpful. The real categories are good and bad history and this book most definitely falls into the former category. By far the worst thing about this book is the dreadful title, because once I overcame my prejudice at this assault on my aesthetic sensibilities and actually opened the book, I discovered that it is a sober, well researched, and well-written account of the AEF on active service.

Retreat, Hell! is an unpretentious narrative history, with analysis judiciously mixed into along the way. He includes accounts of the activities of the American divisions that fought with British and French forces, as well as those who served directly under Pershing's command.

In the course of some work I have been doing on American attitudes to the Great War, I have recently become aware that in sharp contrast to the situation in Britain, in the USA it is a 'forgotten war'. The role of the American Expeditionary Force is little understood by modern Americans, sometimes being reduced to a caricature, that the AEF came over to Europe and 'won the war', or, perhaps worse, simply ignored. That is why good popular history is so important. With the best will in the world, few lay-people are going to read a dense, carefully footnoted tome. They might well read a book like this. Mr. Marix Evans's approach is the one that has become familiar in popular histories of the Great War since the publication of Martin Middlebrook's pioneering work The First Day of the Somme, employing extensive quotes from individuals 'who were there'. Since the history of the AEF is relatively unknown in Britain, I suspect most of the material he uses, even from American 'classic' memoirs such as Will Judy's A Soldier's Diary, will not be familiar to most British readers. The emphasis is very much on the front line, and if I have a criticism it is that the problems experienced by Pershing and his commanders in fighting modem battles are dealt with somewhat lightly.

Mr Marix Evans has exploited the resources of the US Army Military History Institute to very good effect. The book is profusely illustrated in black and white and colour, using modem and contemporary photographs, and, most interestingly, colour reproductions of original trench maps. As an added bonus, there are also colour illustrations of various US and German troop types drawn from appropriate volumes in the Osprey Men at Arms series.

All in all, Retreat, Hell! is highly recommended as a painless and interesting into the study of the fascinating history of the American Expeditionary Force on the Western Front.

Retreat Hell! We Only Just Got Here! The American Expeditionary Force in France, 1917-1918