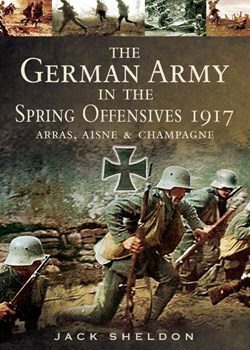 This volume of Jack Sheldon’s highly–detailed series of books on the German Army in the Great War follows his usual effective model – employing the clear writing and knowledge learned from dogged, detailed research which he has effectively deployed in each of the previous six volumes on the German Army on the Western Front.

Soldiers who write about war authoritatively – rather than simple self–serving biographies – are now rare. Jack Sheldon offers rare and highly important expertise – he is a soldier who graduated from the German Staff College, and, despite the well–known destruction of many relevant official German records of the Great War, he has developed what must now be an unrivalled knowledge of German archives, unpublished sources, and published works on the Great War, particularly regimental histories, to fill the many gaps in our collective knowledge of Germany at war.

So, yes, I am a committed enthusiast for his books, for Pen and Sword’s sensible pricing and the author’s willingness to share his knowledge. His ability to link, comment and judge the German material he deploys has made an important contribution to ‘knowing’ Britain’s enemy between 1914 and 1918. His works allow us to see ‘The Other Side of the Hill’ as Wellington famously put it: something far too long denied serious readers and military historians alike.

The German Army in the Offensives of 1917 brings German reactions to events in combat to life and reveals the strength, flexibility and performance of its soldiery as well as the strength of its defensive purpose. Here the author examines events at Vimy Ridge, in the British assaults north and south of the Scarpe, in the French assault along the Aisne, at Bullecourt, east of Arras and on the Aisne/ Champagne battlefield.

Above all, this is a book which valuably reflects the experiences of those on the battlefield and those who commanded the Germany Army on the Western Front. Throughout, we hear tales of dogged, soldierly defence, of outrageous bravery, rapid and adroit re–planning and reaction during the course of battle and sacrifice in fighting enemies whose attacks bent the line and deployed ever growing amounts of artillery to huge effect. While the allies did bend the German line they were unable to rupture it completely. Nor, in 1917 could they break the fighting spirit of the German Army whatever the ground conditions, weight of artillery barrage or infantry assault on chosen ground.

The personal accounts of German soldiers of various ranks are frequently similar yet intensely individual. They add layer upon layer of horror – the overwhelming power of the ‘drumfire’ of British gunnery on battered trenches and shell holes, of the foul, corrupted, conditions under which the battles were fought and where men died. Rarely in my reading about the Great War have I felt the weight of geographical and personal despoliation and of bravery so affecting, or strength of will and willingness to sacrifice so overwhelming.

Personal accounts are one thing, but in such a book it is the guiding authorial voice and expertise which must work – must draw together experiences, conditions and events and provide the narrative thread which guides the reader through the complexities of events. Here, as ever, Jack Sheldon succeeds in his task admirably. It would be impossible to offer other than the highest recommendation for this book.