The War to End all Wars. The American military experience in World War I 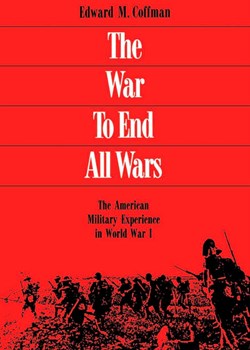 The history of the American involvement in the Great War, first published in 1986 by OUP, has been to many the standard work on the subject. It was based upon some sources new at the time and used interviews with 30 survivors, including two Divisional Chiefs of Staff.

In spite of new research which has since been done, the author has decided not to revise his original text. In effect, we have available again this useful account of the work done by the Americans on the Western front where over 50,000 of them died.

It's a very readable book too, and worth having solely for the long essays and sources at the end.

This review first appeared in the Winter 1992 edition of the Western Front journal Stand To! No. 36 Summer 1992.

In 1998, Paul Guthrie interview Dr. Coffman at length. This interview appeared in Stand To! 54 January 1999. Read this interview >> HERE

There are many benefits to joining the Western Front Association - including automatic subscription to our journal Stand To! and member magazine Bulletin.

To find out more CLICK HERE >> Benefits of Membership.