The First World War was a truly global conflict. Although the vast majority of the fighting took place in France and Belgium, there were countless further battles fought in other parts of the world. In November 1914, one of the more obscure of these battles – characterised by a run-in with a series of beehives – took place in East Africa.

Although large parts of Africa were under the control of Britain in the late Victorian period, the Germans had carved some colonies out for itself, one of which was German East Africa (now Tanzania).

On the coast of German East Africa between Mombasa and Dar es Salaam is Tanga. The town, by then a major sea port, was just 50 miles from the border with British East Africa (now Kenya). Its strategic position and importance as a port made it a tempting target once war broke out.  The governor of British East Africa requested assistance from the British government to deal with the neighbouring German colony. The request was passed to the India Office, which decided to send an Expeditionary Force, numbering some 8,000 men, to East Africa. 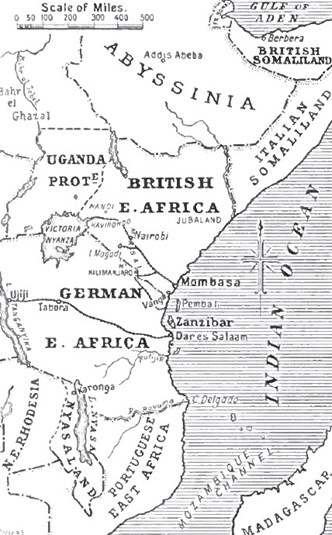 Above: East Africa before the war. Click here to see an enlarged copy of this map 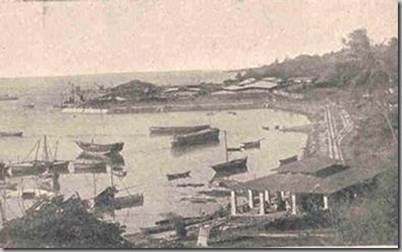 Above: View on the harbour of Tanga. 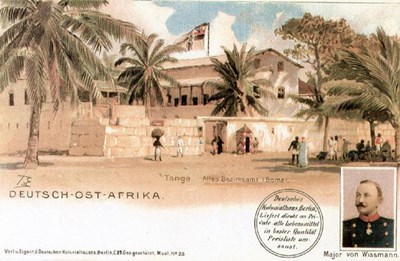 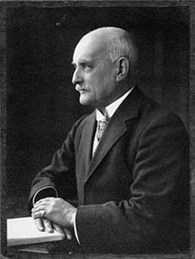 The man chosen to lead the attack was 53-year-old Major-General Arthur Edward Aitken, an Indian Army officer who had been in command of the Poona Infantry Brigade before the war.

Confident from the outset that the campaign would be straightforward, Aitken's units (known as Indian Expeditionary Force ‘B’) comprised one regular British and three Indian Battalions plus a further four battalions provided by an Indian prince. Although the force was numerically strong they were (other than the regulars of the 2nd Battalion Loyal North Lancashire Regiment) poorly trained and equipped.

Captain Richard Meinertzhagen, Aitken's intelligence officer wrote in his diary ".... I tremble to think what  may happen if we meet with serious opposition. The senior officers are nearer to fossils than active energetic leaders." 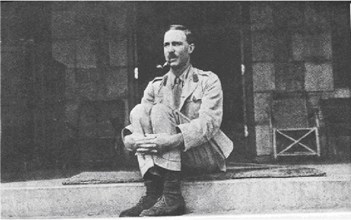 On 16 October 1914, a convoy of 45 ships (including 14 troop transports) left Bombay (now Mumbai). Most of the soldiers were soon seasick. One officer described the two week voyage to Mombasa as "a hell on crowded ships in tropical heat".  It soon became clear that there was a personality clash between Aitken and one of his subordinate commanders, Brigadier General Richard Wapshare. Meinertzhagen wrote in his diary:

"Ever since we left Bombay it has been remarked how cold and even rude Aitken has been to Wapshare. He clearly has no confidence in him and makes no effort to conceal it. Wapshare is no great soldier, perhaps not so sound as Aitken - which does not say much - but he deserves better than this. Tighe [Brigadier General Michael Tighe] is a thruster, much beloved by all of us and clearly a fighting man." 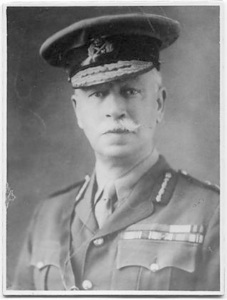 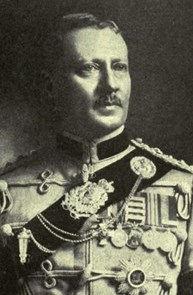 Meinertzhagen pointed out that the German Askaris (local soldiers in Africa) were well trained and well disciplined, but his warnings were not heeded. 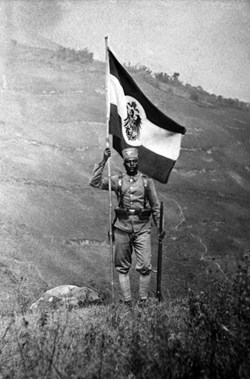 On 2 November the British cruiser HMS Fox arrived at Tanga, ahead of the main force of troop transports. Its captain, Commander FW Caulfield, went ashore to seek the German surrender and to advise that the unofficial truce that had been in place was now at an end. At about this time, two British Intelligence Agents were put ashore. These were Major A Russell and Lt Henry Ishmael. Lt Ishmael was seen and shot and became the first casualty of the action. He died of wounds in the German hospital in Tanga on 4 November. 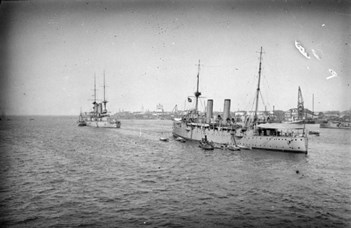 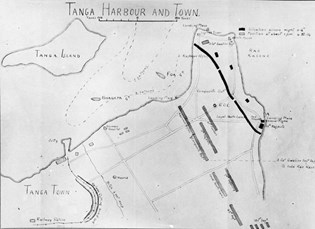 Above Left: HMS Fox. The log book of HMS Fox can be viewed here

Above Right: Diagram of Tanga Harbour. Courtesy of the IWM (Q22745). Click here to see an enlarged map

The delay was utilised to organise troops for defence. The German commander in the area, Paul von Lettow-Vorbeck was in charge of a small military garrison some 200 miles inland at Moshi. Using the light railway, von Lettow-Vorbeck immediately despatched his Askaris to Tanga to meet the threat. Meinertzhagen recorded in his diary "[Caulfield] seems nervous, yet pompous, shifty-eyed and not at all inclined to help. It strikes me that he is definitely afraid and is always referring to the safety of his blasted ship, ignoring the fact that it is his business to protect us even if he loses his ship".On meeting the German District Officer – who gladly entered into negotiations to buy time for troops to be sent to the town – Caulfield naively asked if the harbour was mined and received the answer that it was. This was not the case, but served to add further delays as the harbour was swept for the non-existent mines.

No reconnaissance had taken place and at this late stage Aitken and Caulfield tried to decide where to land the troops. They selected a site that was free of mangroves on the south of a headland called Ras Kasone. The landing was due to take place on the afternoon of 2 November, but it was not until some hours later, 10pm, when the first of the troops left the ships and headed towards the shore, after HMS Fox had fired her 6-inch guns at some (unoccupied) trenches. During the night of 2/3 November, the 13th Rajputs (The Shekhawati Regiment) and most of the 61st (King George's Own) Pioneers were landed and consolidated their positions.

The troops were not only inexperienced, but had been on board ships for over two weeks – a lot of this time in the tropics. They had been overcrowded, suffered from seasickness, and eaten bad food (some of which was at odds with their religious beliefs). After a sleepless night the troops found themselves on a hostile shore with no information about possible enemy strength. In all, it was a recipe for disaster. 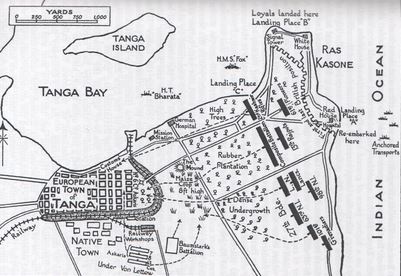 Above: Another plan of Tanga, showing the situation after the landings

During the course of 3 November, and well into the night, other battalions were landed, including the regulars of the 2nd Battalion Loyal North Lancashires and Indian units including the 101st Indian Grenadiers, the 63rd Palamcottah Light Infantry, the 2nd Kashmir Rifles (Body Guard Regiment) and the 98th Indian Infantry. Aitken made another mistake in deciding against landing a battery of artillery. This battery, the 27th Mountain Battery, may well have made a difference to what was to follow. 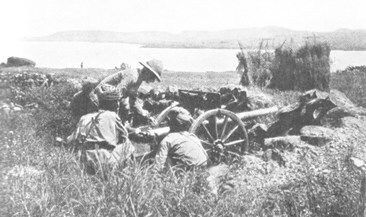 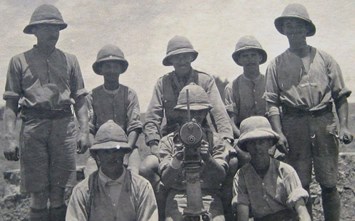 Above Left:  An Indian Army 10-pounder Mountain Gun crew in action in East Africa. This is believed to be the 28th Mountain Battery in the Lake Victoria region 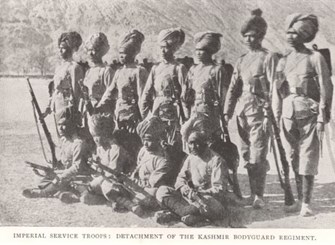 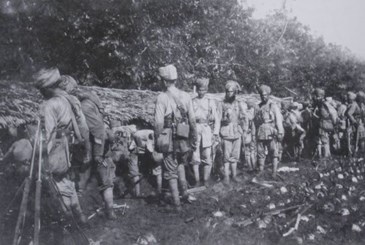 Above Right: The 98th Infantry

At noon on 4 November, Aitken ordered his troops to march to Tanga. This instruction was given nearly two days after the first soldiers had landed. During this time, German reinforcements had arrived and what should have been accomplished easily now turned from potential disaster into farce.

The Indian troops from the 13th Rajputs and the 61st Pioneers, came under fire when they approached the town. Many of these men fell into a headlong retreat. Meinertzhagen tried to stop this but an officer drew his sword on him, so Meinertzhagen shot him. Some of HMS Fox's shells started falling short among the British and Indian troops. Despite the difficulties, the Loyal North Lancs and the Kashmiri battalions drove back the German askaris, but reinforcements arrived and this advance ground to a halt.

To the south of the town – and elsewhere – there were acts of bravery. A company of the 61st (King George's Own) Pioneers were surrounded, but held out until they were annihilated. Local conditions also played a part. Hanging from the branches of trees were bee hives that the locals had made out of logs. These hives were disturbed by rifle and machine gun fire. The bees  swarmed angrily and stung both friend and foe alike. It is reported that one signaller of the Royal Engineers suffered 300 stings on his head. Other men fell back to get away from the bees, which seem to have been particularly prevalent in the 98th Battalion's sector. 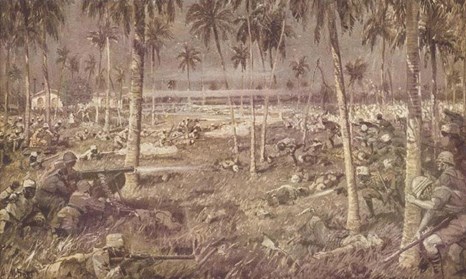 One British soldier is reported as saying afterwards, "We don't mind the German fire, but with most of our officers and NCOs down .... and bees stinging our backsides, things were a bit 'ard." Losses were incurred as bewildered and indisciplined troops fired randomly into the bush. 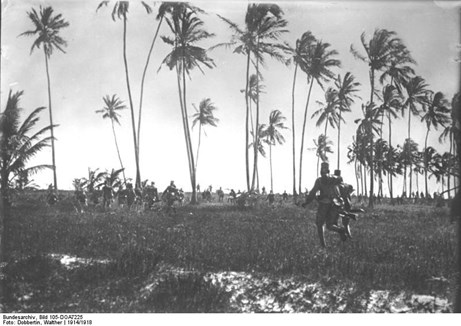 On the north of the line L/Cpl Wylde, of the 2nd Loyal North Lancashires was awarded a Distinguished Conduct Medal.  The citation for the award reads:

"...as having of his own accord, near the bridge about 4.00 pm, under heavy fire, collected numbers of soldiers, Indian & others, in a very cool manner. On several occasions rallying them & putting them in position on the right (north) of the road & checking the German counter attack on that side."

The heaviest casualties were incurred in the 101st Indian Grenadiers (over a third of the fatalities was from this one battalion). The CWGC commemorates five officers and 135 men from this unit who were killed in the Battle at Tanga. As with the other Indian units, this battalion was officered by men born in the United Kingdom or of European descent. The officers killed in this attack included Major Harold Tatum. Records quote a "former Commanding Officer" who considered Tatum "...a man of marked ability" going on "he had seldom met a better soldier or one who knew his profession better. He was a splendid regimental officer..."

Besides Major Tatum, two captains and two lieutenants were killed in the 101st Indian Grenadiers. One of the Lieutenants was Lt Robert Hughes, the battalion adjutant.

Another officer killed at Tanga was Major Francis Braithwaite, aged 42, of the 2nd Loyal North Lancs. This battalion lost 48 officers and men. Braithwaite was recommended for an award “For gallant leading and judgement in face of hot fire”, however this award was not subsequently approved. When Tanga was captured later in the war, Braithwaite's body was identified from the gold fillings in his teeth. Major Braithwaite is now buried in Tanga Memorial Cemetery. 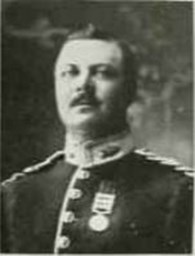 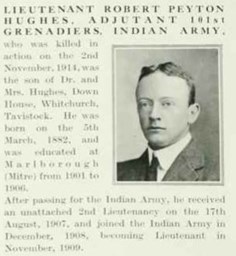 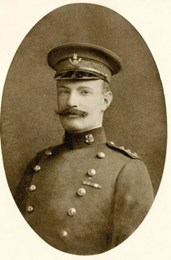 Realising that the landings had no chance of succeeding, Meinertzhagen was sent into Tanga on the morning of 5 November to open negotiations with the enemy. The Germans agreed that they would allow the British to evacuate their wounded from the beaches. Even this exercise went wrong, with incompetence leading to delays and officers and men wandering about the area as if on holiday. 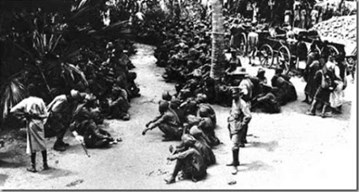 Above Left: Schutztruppe soldiers posing with a captured British flag in front of the casino of Tanga. / Above Right: Indian prisoners of war after the battle

The Germans were left in control of Tanga, and captured many of the men who had not managed to re-embark from the beaches. No attempt was made to destroy the arms or supplies that had been landed. These were to prove valuable in the coming years as von Lettow-Vorbeck continued to harry the British in Africa. The British Official History of the War described the events at Tanga as "one of the most notable failures in British Military History". The British lost nearly 400 killed, with a similar number wounded or taken prisoner. This out of a force of nearly 8,000. German casualties were believed to total less than 150.

The British and Commonwealth dead are buried mainly in Tanga Memorial Cemetery, although two men of the Loyal North Lancs are buried in the nearby Tanga European Cemetery. 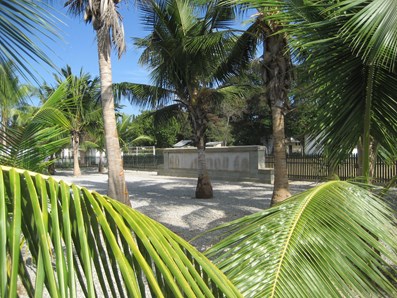 Above: Tanga Memorial Cemetery.  Image courtesy of The Great War in Africa Association

The campaign in East Africa lasted the whole of the First World War, with von Lettow-Vorbeck defying all British attempts to capture him and his soldiers. Aitken was recalled to London and was asked to explain how such a large force could have been defeated by just 1,000 German-led Askaris. He was unable to provide a suitable answer, was demoted to Colonel and subsequently retired. He died in 1924 and is buried at the Campo Cestio Protestant Cemetery in Rome (near the famous 19th century poets, Keats and Shelley).