Torchbearers of Democracy. African American Soldiers in the World War I Era by Chad L.Williams 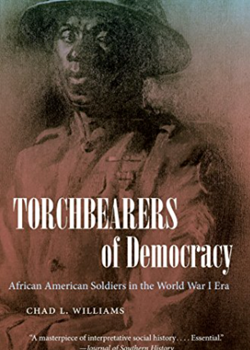 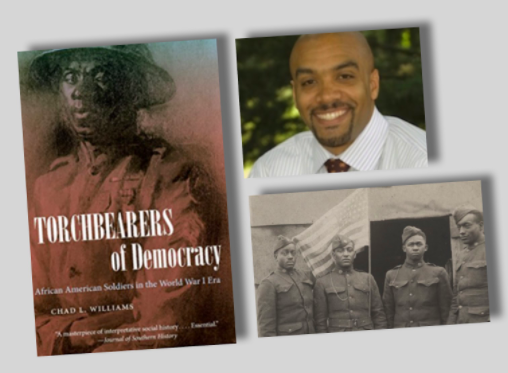 This is an important, distinctive and scholarly exposition of an important confluence of events that has had repercussions throughout the 20th century and beyond. When African American’s volunteered to serve, or received the draft, during the First World War they did so against a background of Jim Crow segregation, state sponsored suppression, fear, injustice and violence. Their hope was that by showing they could serve in France ‘in defence of democracy’ as citizens and men under the United States flag that on their return they would be given greater freedom, more opportunities and protection under the law. Far from it, returning uniformed African Americans faced even greater, violent suppression and injustice.

The war inspired the optimism of many African American and race activists stoked the fires of their democratic sensibilities, and gave them hope that through patriotic sacrifice reform was indeed possible. (p.77)

The American Army Command were unwilling to countenance any opportunity for an African American to give orders to a white soldier, let alone serve along side him other than in a subservient or labouring role. On American soil African American soldiers were dispersed rather than training together so that there were always outnumbered two to one, white to black.

Britain were complicit in this as the 92nd Division, comprising African American troops would have been  trained by the BEF but for the intervention of Minister of War Lord Milner = a committed white supremacist, objected. (p.121) After all, colonial black South Africans had been limited to labour, so men other men of African descent could hardly been seen baring arms.

77 black officers of the 372nd were brought before efficiency boards and transferred out of the regiment on spurious grounds. Manipulated test scores of black artillery officers at Camp Taylor in Kentucky so that only 33 received commissions. P.133

“The treatment meted out on us violated every principle of Army regulations, Army procedure and tradition and was visited on us solely in an attempt on the part of the white officers to humiliate us and destroy our prestige as officers in front of the French instructors, the white soldiers and even the German prisoners''. (130) Houston ‘Saving the World for Democracy. Pittsburgh Courier, 14 September 1940 (p.134)

The history of the AEF in France is a story of ‘an endless array of blunders’ (p.139) with  Pershing guilty of a series combat blunders. The Meuse-Argonne operation revealed Pershing to be both naive and dangerously overconfident in his handling of the AEF. (p.136).

Lacking proper training and advanced preparation American soldiers struggled with their crash course in the horrors of modern warfare and performed with mixed and sometimes outright disappointing results. (p.152)

“White racists reasoned that the black race could ‘never achieve full inclusion into American democracy - because of their inferiority and lack of manliness’. (p.141)

‘African American soldiers continued to stand as embodiments of patriotism, sacrifice, and the prospect of social change, but this idealism was tempered by their constant battles with abuse, insult, and slander’. (p.143).

7 Aug 1918 infamous memo titled ‘On the Subject of Black American Troops’ was issued which - “with stunning bluntness …  offered a primer in American racism and how to apply its logic to the treatment of black soldiers in France’ (p.160)

After the War and the War At Home

At least 11 African American Veterans were lynched in 1919 including:

The legal lynching of Edgar Caldwell, 15 December 1918 when he obtained a pass and boarded a local streetcar in Anniston in Calhoun County, Alabama 20 July 1920 hanged. (pp.241-244)

Autumn 1920 Julius Perry encouraged African American to register to vote - he ended up lynched and many dead.

100,000 African American Servicemen relocated to the north on demob.

Foundation of the League for Democracy and Osceola MacLaine's role.

‘Desires to Court Martial Colonel Greer of 92nd Division for ‘disloyalty to their country and insidious anti-negro propaganda’. (p.275)

Military training and a self-evident willingness to lay down his life for a good cause made the African American veteran well suited and if necessary risking his life against any lynch mob p.284

Scotts Official History of the American Negro in World War 1

The World's War by David Olusoga