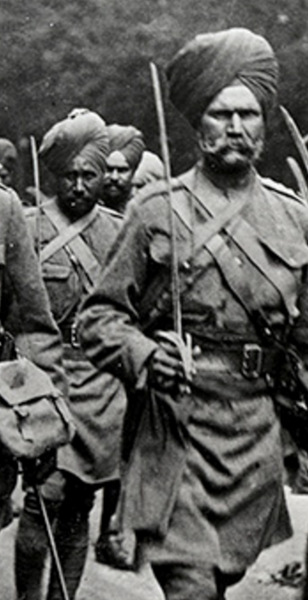 THE ROAD TO BAGHDAD

It became apparent by January 1915 that the situation was not quite as was hoped for. The Turks were reinforcing Mesopotamia and it was learnt that German and Turkish diplomatic missions had been in Persia. Although the Southern oilfields were secured some of the local tribes had become restless and a pipeline had been cut. This forced Barret to send troops to further guard the pipeline. The situation became even more uncomfortable when early floods turned the post in Qurna into an island. Barret withdrew the garrison.

Fearing that they may soon be an assault on Basra or Persia or even both, the British High Command reinforced Force “D” and Lieutenant- General Sir John Nixon arrived on April 18th to assume command. This turned out to be very timely as on April 11th a Turkish force of some 12,000 Turkish troops supported by 10,00 Arab irregulars which had assembled at Nasiriyah, attacked Qurna and the outpost at Shaiba which was only held by two brigades. Having suffered a three-day bombardment at Qurna, the Allied troops counter attacked forcing the Turks to withdraw. However, Shaiba was not so easy. Having been shelled for two days, a two-pronged attack came in. The hard fighting lasted until the next day. The conditions were bad for both sides, with floods still in the area and resupplying was a problem. The Turks began to struggle to keep up the pressure and on the 14th the allies counterattack pushed them back. There was no pursuit but the situation was helped when the Arab irregulars turned on their Turkish allies killing and looting isolated groups of retreating soldiers. The Indian Brigade has suffered nearly 20% casualties, about 1,200 men, the Turks losing over 2,000 men.

It became apparent that Nixon had some big aspirations and in agreement with the Cox, the political advisor, they agreed that despite being short of almost everything men and materiel, the real objective should be Baghdad.

The first objective was to take the towns of Amara 120 miles north of Qurna and Nasiriyah, 120 miles to the North West. Not satisfied with this there was a subsidiary expedition to suppress some “restless” tribes in what was then Persian Arabistan! April to June was not the best time of year to be campaigning.

There is an old Arab proverb which runs along the lines of “When Allah made Hell, he found it was not bad enough, so he made Iraq and added flies!”

Despite this and some residual flooding the campaign against the Tribes was a success. Again, the River supported the other advances with Gunboats and an assembly of local river boats.

The Allied commander attacking Amara, General Sir Charles Townshend, had been informed by aerial reconnaissance that the Turks were withdrawing, so he pushed ahead of the main body with 100 men to take the town. Most of the Turkish army had withdrawn, leaving only about 2,000 somewhat demoralized troops and abandoned equipment. This was possibly just as well as the main army was some 50 miles behind so Townshend had to bluff his way until they arrived.

Predictably, Nixon was delighted with the quick capture of Amara and it convinced him that the remainder of the campaign would be as easy even though spring was turning to summer and the rivers were beginning to run low making shipping support difficult.

In true British style Nixon decided to carry on, so throughout July he pushed on to Nasiriyah a regional Ottoman supply base. Advancing through very difficult, broken terrain and not only contending with flies, high humidity, extreme heat but with the marauding attention of yet another local tribe, the combined force of British and Indians became exhausted. Nearly half of the force was recorded as sick.

The fortitude of the allied forces has to be admired as on the 25th July Nasiriyah was taken with the loss of about 500 men. The Turks reported 500 dead, 1,000 wounded and the remainder taken prisoner.

Fortunately for Nixon, who by this time had his forces spread far and wide, the Colonial Government in India changed its mind. In India the Muslims were showing signs of unrest and the failure at Gallipoli greatly improved the reputation of the Ottoman Army and so the Viceroy considered that to advance and take Baghdad via Kut. Kut is about 150 miles up the river Tigris from Amara and the most likely point from which the Turks would launch an attack on the Persian Oilfields or Mesopotamia. Its loss would be a blow to Turkish prestige. Its possession would also provide a jumping off point for the eventual taking of Baghdad, another 100 miles upriver.

Nixon saw the opportunities for more victories at a time when most commanders, on the Western Front, had few of these and although he was aware of the shortages that his army suffered from in supplies and especially medical supplies, he considered that Kut would be an easy victory, to add to his list. General Townshend was not so convinced and wanted to bring up six months supplies before proceeding with the advance. He was allowed six weeks.

The expedition to Kut was made up of 11,000 men and 28 guns supported by three gunboats. This force was met at Es Sinn by a well dug in Turkish force of 10,500 men with twelve field guns. This engagement was on 27th September and despite the weather turning cold the allied forces crossed the river using a pontoon bridge. They found that the Turks had withdrawn to Ctesiphon 80 miles upriver. The Turks lost about 4,000 men whilst Townshend about 1,200 but mainly due to sickness.

The force paused whilst supplies were brought up but the Turks were not idle. Recognising that Nixon’s force was thinly spread, and knowing that the Dardanelles were safe and the Russian and Egyptian fronts were stable, the opportunity was taken to reinforce Mesopotamia.

Despite this, after some lengthy deliberation it was agreed by High Command that Nixon should be sent reinforcements and proceed to Baghdad.