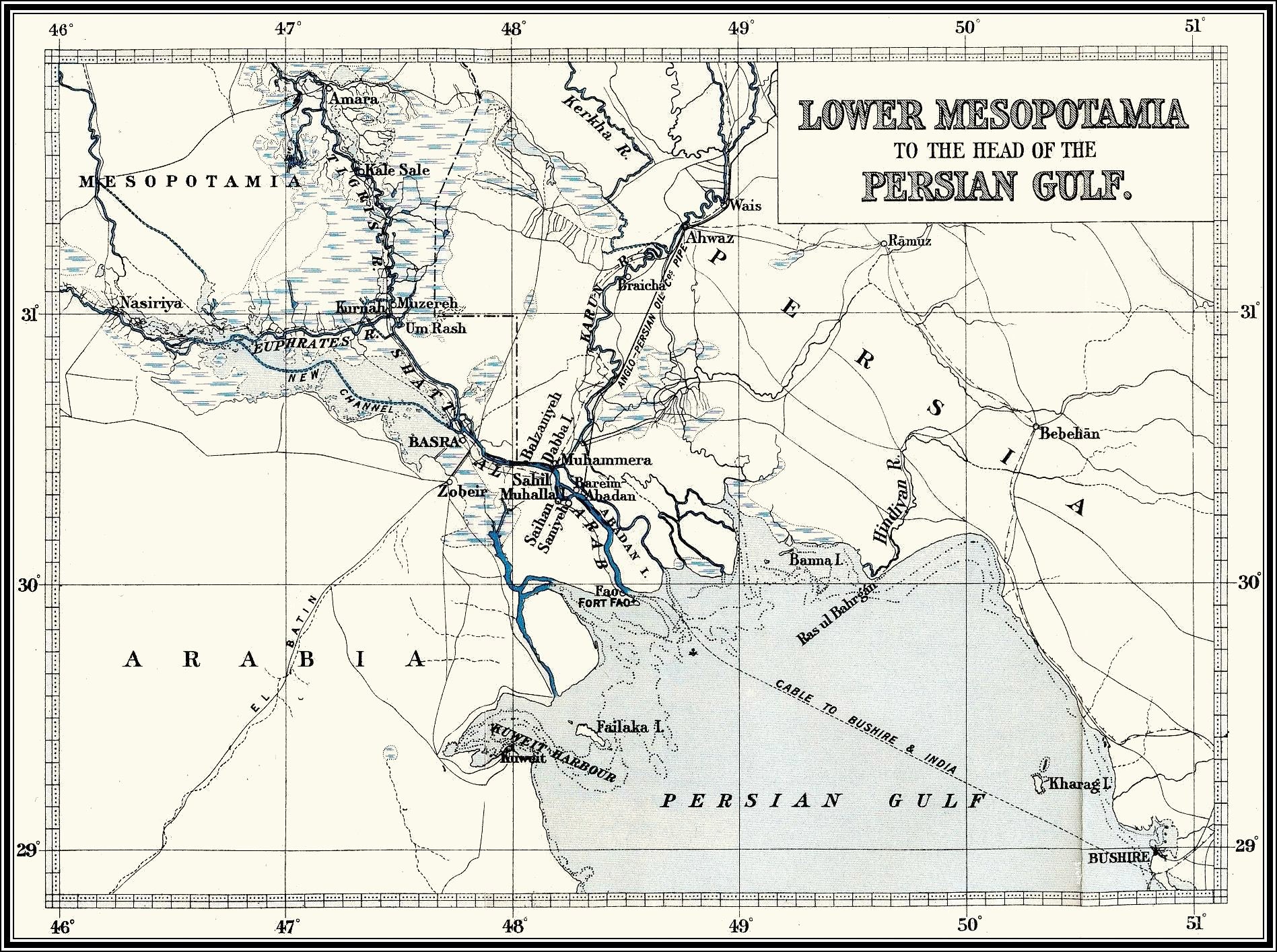 THE “SCENE IS SET”

In this current era, we are familiar in both Military and Political circles of the term “mission creep”. Well, surprisingly enough this is nothing new as events during the Great War in the Middle East demonstrate.

Anticipating the Ottoman entry into the war, an expeditionary force of Indian Troops under the Command of the Colonial Indian Government, arrived in Turkish waters on November 5th. This was the same day that Britain and France declared war on the Ottoman Empire in responding to the shelling o of Russian ports by the Turkish navy.

The prime role of Force “D” as it was known, was to guard the Persian oil fields.  The protection of the Shatt-al-Arab waterway would ensure, for the British, a continuing supply of oil for the Royal Navy. Comprising of 5,000 men and 1,200 animals Force “D” encountered within the region a Turkish force of 10,000 men and 114 artillery pieces. The key to this southern part of Mesopotamia was Basra (and still is) and some 8,000 men and 58 guns were positioned by the Turks in and around the immediate area.

Force “D”, commanded by Brigadier-General Walter Sinclair Delmain, was thus facing a superior force and was therefore ordered to take secondary objectives until reinforcements from India arrived. Wasting no time, on 6th November he captured the coastal batteries at the mouth of the Shatt-al-Arab, two days later he created a beach head on Turkish territory by repulsing a Turkish attack on the 11th November.

On the 13th the reinforcements arrived with General Sir Arthur Barrett who then took overall command. The approach to Basra was defended by a Turkish fortress and held by 4,000 Turkish regulars and 1,000 local Arab fighters. Force “D” put down a heavy barrage taking a serious toll of the defenders as, apparently, they were unable to sight their own guns because their view was blocked by a mirage! Casualties were “relatively” light for the allies losing about 353 men whilst the Turks and their local forces lost 1,000.

One of the defining characteristics of the Mesopotamian campaign was that the rivers provided the logistics arteries (Mesopotamia means “two rivers”) these were fought over and around throughout. Realising this, the Turks tried to block the Shatt-al-Arab by placing a “boom” of sunken ships across. These were secured together with ropes. Fortunately, for Force “D”, one of the cables snapped allowing the British reinforcing ships and gunboats to steam through one at a time. (The role of gunboats may be examined at a further time).

Having heard on the 20th that Basra had now been abandoned by the Turks, Barret immediately advanced and occupied the city of 60,000 inhabitants without a fight. This was some achievement as, against a stronger force and in hostile territory Barret had within 3 weeks, achieved all of the expedition’s objectives resulting in Barret settled in to fortify his position and “consolidate” his political hold over the immediate area.

This is now when the politicians become involved again!

Attached to the Force “D” was Colonel Percy Cox who as the political adviser had a greater plan. He cabled his superiors in the Colonial Government in India and stated “after earnest consideration of the arguments for and against I find it difficult to see how we can well avoid taking over Baghdad”. In other words, “we are on a role so let’s carry on. This message appears to be entirely political as Constantinople had by now, called for Jihad against the Allied forces. There appear to have been a couple of major influences on this recommendation by Cox. Firstly, the Indian government were always very wary of anything that would fuel “anti-British” feeling within the Muslim community of India so keeping the Turks on the run and occupying Baghdad would send a clear message. Although Baghdad was not strategically important it would be a very strong message if taken. Secondly, he understood that the Turks were under pressure in the north of their empire, and this would lead them to divert troops away from Mesopotamia.

Although the politicians in India generally agreed with the assessment, the military initially, did not. They argued that Baghdad was more than 300 miles northwards up a very winding river of which the Royal Navy had very little detailed knowledge of and thus would not be able to support a large force of conquest and occupation, which Barret didn’t have. On top of this the heat was stifling, 120o not uncommon with no existent roads and rampant disease! The General Staff in India responded that “however desirable politically, military considerations indicate that even success would result in our general strategic position being weakened rather than strengthened”.

A compromise was reached and it was decided to have Barrett advance to Qurna, some 40 miles north of Basra at the confluence of the Euphrates and the Tigris Rivers. It was felt that by occupying the most northly point of the Shatt-al-Arab it would put pressure on the Turks and show the Muslim population in general that the British were not just going to sit in the South and to leave the option of moving onto Baghdad. It also had the secondary effect of effectively blocking the German supported progress of the railway link soon to be known as the “Hejaz Railway (This story for another time).

The first engagement took place on the 3rd December but the Turks demonstrated that they were not beaten and the village was not finally taken until the 9th. This was following a gunboat bombardment and the arrival of some reinforcements. The allies reportedly lost some 300 men with the Turks about 1,500 with 1,000 being taken prisoner.

My thanks to Jonathan for this contribution.