Caption: Gaudron G111 being restrained prior to take off at Maktua. Courtesy: 'Guerrillas of Tsavo' by James G. Willso

About this talk: This talk examines the role of aircraft in the African theatres, from inception in 1913 through to the South West Campaign, the search for the Königsberg, and then how flight was used in the East Africa campaign (observation, morale). It includes the challenges pilots and mechanics faced against harsh nature to get the planes airborne. Units include 26th Squadron (South African) RFC, RNAS 4 and 8, and the embryonic South African Air Corps.

About this speaker: Dr Anne Samson is an historian of war. Her particular focus is on Sub-Saharan Africa during the Great War and on Lord Kitchener. She has been researching the African theatres, mainly East, Central and Southern Africa, for over 20 years and co-ordinates the Great War in Africa Association (www.gweaa.com). She has published Britain, South Africa and the East Africa Campaign 1914-1918, East Africa by Motor Lorry: Recollections of an ex-motor transport driver, and Kitchener: The man not the myth among others. She was a member of the 2020/21 CWGC Enquiry into the Uncommemorated.

This online talk: opens at 19:20 for a 19:30 start, ending at about 20:30. Participating is quick and easy. The only equipment you need is a computer, or a tablet, or a smart phone. Simply email wfa.nwkent@gmail.com for your link and the passcode. We'll also automatically add you to the mailing list to keep you updated with future events. 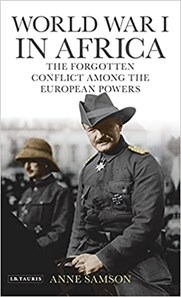