Online talks: This online talk starts at 19:30 and ends about 20:45. Participating is quick and easy. The only equipment you need is a computer, or a tablet, or a smart phone. Simply email wfa.nwkent@gmail.com for your link to the next video meeting. We'll also automatically add you to the mailing list to keep you updated with future events.

About the talk: By its end in December 1916, roughly 300,000 French and German soldiers had fallen in the Battle of Verdun, many disappearing without trace. After the war, the enormous task of finding and dealing with the remains took several years, aroused violent argument, and left many people without answers. While French families could raise private memorials, German families could not, and decisions concerning German remains were taken by French authorities. Today the French and German authorities work together whenever human remains are recovered. However, many are still lost and the recent reappearance of unauthorised memorials poses a dilemma for local officials. The 2019 book - Walking in the Footsteps of the Fallen - from which this talk derives is pictured below.

About the speaker: Formerly a long-time resident of Luxembourg, Christina knows the north-eastern part of the Western Front very well, often conducting battlefield tours there. She has also written six notable books on the Battle of Verdun, and has acted as a consultant and historian to numerous BBC documentaries. 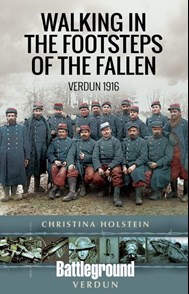