On the 7 September 1914 the 9th Lancers (2nd Cavalry Brigade) conducted the last lance verses lance charge on the Western Front. It took place at Le Moncel, just outside Paris, on what would become the end of the Retreat and the beginning of the Battle of the Marne. The commanding officer, and two troops of B Squadron charged a squadron from 1st Garde Dragoner. The story, like many was depicted in paintings, which have misrepresented the action. Likewise, the regimental history only recorded that which supported the cavalry narrative. The presentation seeks to represent an accurate portrayal from both German and British sources. 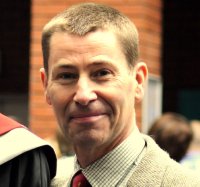 Major (Retired) Phil Watson joined the Army in October 1976 at JLR RAC as a boy soldier, and on joining the 9/12L served with the regiment in Cyprus, Bosnia, Northern Ireland, and the Gulf War. During this period, he also served away from the regiment conducting two tours at the RAC Signal School as an instructor. In 1998, he was commissioned from the ranks, and was appointed the regiment’s first Regimental Career Management Officer.

He became interested in regimental history during his time in the WOs’ and Sgts’ Mess having been responsible for the silver or chattels for the whole period he was in the Mess. His main area of interest was the detail around the Regimental Day; Mons/Moy, which commemorated the last two mounted lance actions of the regiment during the Retreat from Mons. After accumulating a wealth of information over 19 years, his first book The Last Charges was published by the regimental trustees in 2016.

On leaving the Army after 35 years, he assumed the appointment of Assistant Regimental Secretary, providing welfare support to Lancers in need. He is an adult volunteer with Lincolnshire ACF, after completing three years as the commandant for Leicestershire, Northampton, and Rutland. He recently completed his Master’s degree at Wolverhampton University under the tutelage of Professor Gary Sheffield and Dr Spencer Jones in 2022.