Several months after her commissioning in 1912, Goeben, with the light cruiser Breslau, formed the German Mediterranean Division. After the outbreak of World War I  Goeben and Breslau bombarded positions in North Africa and then evaded British naval forces in the Mediterranean and reached Constantinople. The two ships were transferred to the Ottoman Empire on - the Goeben became the flagship of the Turkish Navy as the Yavuz.

By bombarding Russian facilities in the Black Sea, she brought Turkey into World War I on the German side

This talk by Dr Scott Lindgren explores the events, reasons and consequences of these early naval affairs. 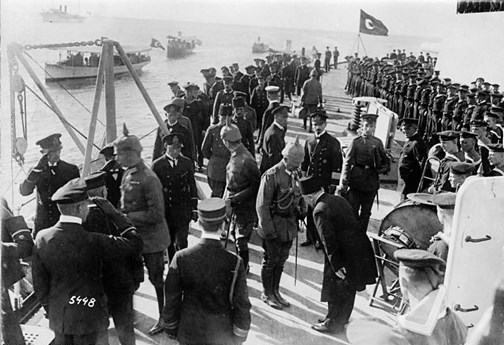 Above: Kaiser Wilhelm II visiting Yavuz during his stay in Constantinople in October 1917 as a guest of Sultan Mehmed V