Welcome to the May edition of the Newsletter. 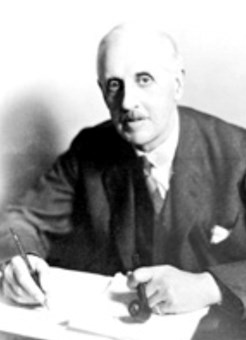 May I thank everyone who came to the AGM last month, especially those who kindly brought food.  On behalf of the committee, may I thank you for re-electing us and can assure you that we will continue to work hard running the branch and providing an interesting and varied programme.  As ever, if you have any suggestions or offers of help please see any of the committee members.  The topical photograph this month is from the Commonwealth War Graves Commission website and shows their founder, Sir Fabian Ware.  I have included this as May marks the centenary of the Royal Charter being granted to the, then, Imperial War Graves Commission.

Despite the 1907 Hague Convention prohibiting the use of chemical weapons, the first use in WWI was in October 1914 when the French used tear gas.  They had developed this before the war for riot control.  The British developed a tear gas weapon at Imperial College in March 1915, this was known as SK after the South Kensington location of the College.  The Germans used tear gas on the Eastern Front in early 1915 but the conditions were too cold for it to be effective.  The German chemist Fritz Haber suggested using chlorine gas released from cylinders as a more effective weapon and this was tried by the Germans in March and April 1915, despite objections from a number of senior commanders.  South of Ypres, 6,000 cylinders were installed and then moved North of Ypres after 6 weeks waiting the correct prevailing wind.  The gas was released at 5a.m. on 22nd April against the French and was a spectacular success.  It was to remain the principle gas attack method for a lot of the war.  The victims were found lying on their backs with their fists clenched; they were drowned by the liquid filling their lungs. Early protection was provided by cotton pads soaked in a neutralising solution such as sodium bicarbonate, urine or water.  The British retaliated at Loos but they found that it could not be combined with a major infantry attack because of the wind, but could be used a preliminary softening up.  This is why it was not used on the first day of the Battle of the Somme.

Because of the reliance on the prevailing wind cylinders were not a reliable method of targeting gas so shells were developed.  The Germans tried tear gas shells but could not get much gas per shell.  Chlorine was not poisonous enough for deployment by shell; cyanide (prussic acid) was lighter than air but Phosgene, first used in 1916, was the most effective shell gas of the war.  In late 1916, the British made their most important contribution with the Livens Projector.  This was a method of firing drums of gas (7.6” diameter x 20” long) from smooth bore tubes buried in the ground at an angle and was named after William Howard Livens of the Special Brigade.  About 800 could be fired electronically at the same time.  These were trialled at High Wood and Beaumont Hamel in August 1916.  Y Ravine was filled with gas as a result.  Livens made a detailed analysis of how many were killed as a result (he had vowed to kill as many Germans as people who had died on the Lusitania).

For every new chemical weapon a new counter measure was developed.  At the end of 1916, the British issued the best gas mask of the war.  This was the small box respirator which had different filters to counter different gases in the box.  By April 1917 the whole Army was issued with one.

The Germans used two new types of shell in July 1917.  ‘Blue Cross’ used on the 10th at Nieuport was a new concept intended to penetrate the filters of gas masks with a fine cloud of particles of diphenyl arsine.  The attack was a success, but prisoners showed no effects of the chemical as the particles were too big.  The British managed to get this idea to work in 1918 by heating the chemical to turn it into a smoke to get it to disperse.  Victims suffered respiratory and psychological effects.  The second type was ‘Yellow Cross’.  This was not a gas shell but contained a liquid which was called mustard gas as it had a garlic-like smell.  It caused respiratory and eye injuries.  Its main property was its persistence; the liquid was scattered around the impact area and stayed there.  It was thus good used as an area denial weapon and was a defensive shell.  Harber warned Hindenburg and Ludendorff that if it was used, Germany would need to win the war within a year or else the Allies  would also develop mustard gas.  To decontaminate affected troops they needed fresh clothing.

Fifty thousand ‘Yellow Cross’ shells containing 125 tons of chemical were fired at Ypres on 12th July, on the assumption that the British troops were in the town.  However they were further back and only half a battalion was there.  The shells only had a small amount of explosive and detonated with a ‘dull plop’. The effects were not immediate and included, blisters, vomiting, conjunctivitis and later breathing difficulties.  After two days the lung problems lessened and after six days the conjunctivitis was gone.  The blisters often led to skin rashes although this had not been anticipated by the Germans.  Also not anticipated was the fact that there were usually no long term health problems or fatalities; it was an incapacitating weapon which took troops out of the line.  Statistics show about 100 fatalities from 2,000 admissions to Casualty Clearing Stations; this can also be equated to 500 shells per fatality.  ‘Yellow Cross’ was still used in July and August and was mixed with phosgene (‘Green Cross’) and ‘Blue Cross’.  The plan was that the ‘Blue Cross’ would cause the troops to remove their respirators and would then be affected to the phosgene.

The British and French used chloride of lime dispensed from crop sprayers to decontaminate shell holes.  The same chemical mixed in Vaseline was used later as an anti-gas ointment.  As the men became used to mustard gas some would deliberately contaminate their eyes to get a month in hospital.  At any one time in 1918, there were about 20,000 men in hospital because of gas injuries.

The Germans used gas extensively during Operation Michael in March 1918.  Between the 9th and 19th large areas of ‘Yellow Cross’ was used North of the River Scarpe with smaller amounts of ‘Green Cross’ and ‘Blue Cross’.  On the day of the attack (21st) , ‘Yellow Cross’ was fired North of the attack area to deny this to the British; ‘Green Cross’ and ‘Blue Cross’ were fired into the attack area.  This meant that the attackers had to wear their gas masks.  Fifty percent of the bombardment was chemical, of which 80% was counter battery fire of mustard gas.  Similarly, on the Lys in April 1918, mustard gas was used on the flanks of the attack. And Ypres was blocked off to prevent reinforcements.

To produce mustard gas quickly enough, the French accepted factory casualties of the same level as the front line casualties.  The British used mustard gas on the St Quintin Canal in September 1918; the Germans were not able to produce new uniforms to enable their troops to be decontaminated.  The USA was producing 2.7 million gas shells a month and fired 36,000 on 1st November 1918 North of Verdun.

Corporal Cecil Howard WELFORD who died on 15th  April 1917 aged 30. He was serving with 1st  Garrison Battalion, Devonshire Regiment.  Cecil was by trade a postman and enlisted in Aylesbury. He died when the troop ship 'Arcadia' was torpedoed off the Greek island of Crete. Originally Cecil was buried in the islands capital Heraklion, his body was re-interred on the Greek island of Syros in the Syra New British Cemetery.  He is remembered in Brill where he lived in the Church and on the village memorial. 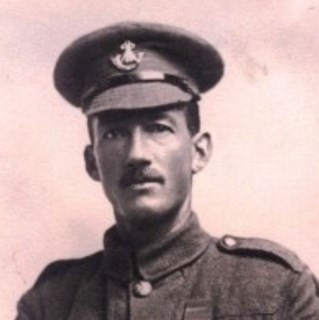 Company Sergeant-Major Edward Brooks, OBLI, was awarded the VC in 1917 and this event was commemorated at his birth place in Oakley on the 28th April with the unveiling of the Commemorative Paving Stone.  There were many events organised by the village around this event and the Branch was well represented by Nigel, Val, Peter and Ferner (supported  by their drivers) and we are very grateful for their time preparing for an attending the two days.  The organisers also expressed their thanks: “I just wanted to thank you and your colleagues on behalf of myself and the rest of the committee for attending and exhibiting at our event last Friday and Saturday.  The whole event went far beyond what we had reasonably expected and we have received nothing but positive feedback for your exhibits and willingness to dress up for the cause !!”.  Nigel also reports that “Saturday was twice as busy! Queues from 9.30 (opened at 10) right through to 5.15 (supposed to close at 5) but the busiest time was just following the fly past. They lost count of people watching. Also we were on BBC South, ITV Meridian & Bucks TV so not bad”

The following background information on Edward Brooks is from the following websites: http://www.oakleyvc.org/ and http://www.victoriacrossonline.co.uk/edward-brooks-vc/4585996122

On 28 April 1917 at Fayet, near Saint-Quentin, France, Company Sergeant-Major Brooks, while taking part in a raid on the enemy’s trenches, saw that the front wave was being checked by an enemy machine gun. On his own initiative he rushed forward from the second wave, killed one of the gunners with his revolver and bayoneted another. The remainder of the gun crew then made off, leaving the gun, whereupon the company sergeant-major turned it on the retreating enemy, after which he carried it back to Allied lines. His courageous action undoubtedly prevented many casualties and greatly added to the success of the operation.

As usual, the Branch will be exhibiting at this event in Aylesbury and any help for all or some of the day would be welcome.  Please see me if you are able to help.  Thank you.