In this presentation Pratap Chhetri will look at aspects of the Indian Labour Corps including the process of their recruitment, the journey to France, their pay and service. He will talk about how these non-combatants contributed immensely to the War effort even though they did not bear arms. He will also be touching on the Labour Corps from North East India, which is his area of expertise. Finally Pratap will talk about their legacies and literature.

The talk will be based on his article on the Labour Corps, on the guest blog of the Centre for Hidden Histories, University of Nottingham. This article has also been included in a book 'Le Jardin Aux 12000 Pierres' by French military historian Paul Le Trevier. His talk will also draw from Prof. Radhika Singha's seminal scholarship on the Indian Labour Corps. 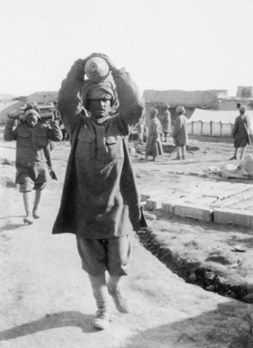 Pratap Chhetri is a civil servant who for the last ten years has worked for the Government of Mizoram, a state in India's North Eastern Region specializing in media matters and public communication. As an enthusiast, since 2014, he has been researching the various Labour Corps from North East India who served as a part of the Indian Labour Corps in France in 1917/18 and also the unknown facets of Gurkha participation in the Great War such as the role of the Assam Rifles and also the first Gurkha who fought in the First World War as a British Officer. His Gurkha relatives served in both the Wars as soldiers, in the Western Front in the First World War and in the Burma Campaign in the Second World War.

Pratap has contributed to two episodes of 'Mentioned in Dispatches':

The Indian Labour Corps in WW1

The First Gurkha Officer in the British Army

It is also possible to register by clicking this link: The Indian Labour Corps

Your Computer, Your Home
ONLINE: The Indian Labour Corps by Pratap Chhetri, office@westernfrontassociation.com