The Scanning of Pension Records is underway

Members of The Western Front Association will no doubt be pleased to learn that scanning of the Pension Records has commenced.

The scanning, which will of course lead to the digitisation of the records, has come about after detailed negotiations with Ancestry who have undertaken to scan and digitally make available the approximately 8 million records that the WFA have saved from destruction.

Because of the scale of the operation that is needed to not only scan but electronically "tag" each of these records, Ancestry's resources are a perfect match for what is required here. (The 'tagging' will involve interpreting every card and ledger to extract from it the data needed for a successful on-line search to be made.)

To remind members, these records comprise upwards of six million cards relating to soldiers' (and sailors and members of the RFC/RAF) pension claims relating to their service in the First World War.

Pension record cards of soldiers who were killed in the war number (unsurprisingly) approximately one million - and these cards often yield fascinating information that cannot be found on other military or genealogical records -however,  arguably the more important aspect of these records are the cards that relate to those men who survived the war. Often this is the only record that still exists of an individual's war service and is especially useful as it often links the genealogical record (such as home address) to the military record (regimental details). For this reason the cards can often be used to positively identify individuals who were believed to have served in the war, but without any way of knowing with which regiment they served. 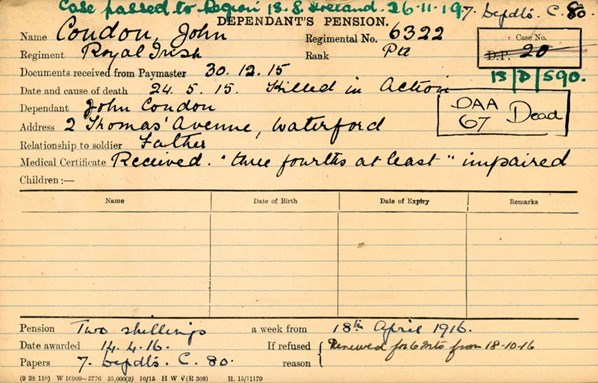 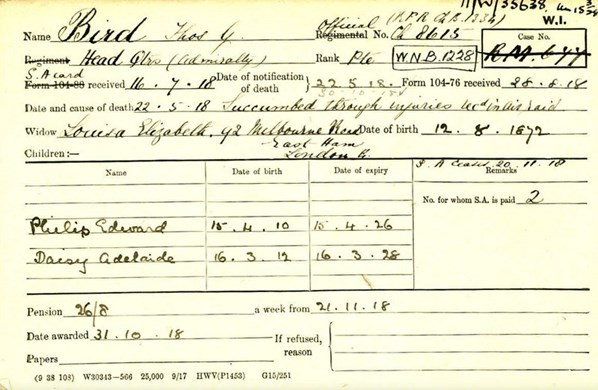 Two pension records for men who were killed in the war. One is for Private John Condon - commonly believed to be the youngest soldier to be killed in the first world war. The other for Private Thomas Bird who "succumbed through injuries received in air raid" (this probably being a raid on the UK by Gotha bombers on 19 May in which killed some 47 people). Bird's children are detailed on the card. 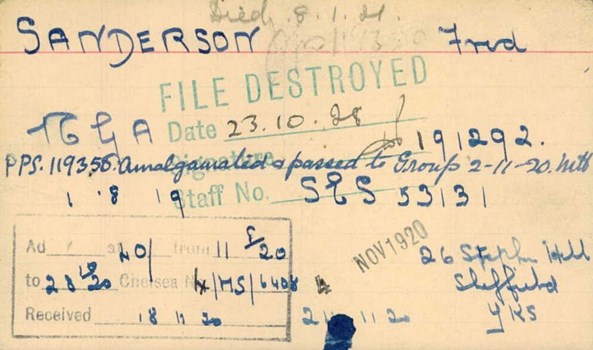 The card for Fred Sanderson (191292, RGA) who survived the war. The card provides both an address, and (a difficult to identify) code number of 4/MS/6408 which is a significant lead for obtaining any surviving ledger for this individual.

The scope of the records is very broad, and - besides the cards mentioned above - comprises a number of other sets of records such as "Naval ledgers" for those men of the Royal Navy who were granted pensions. Although this is a small section of the whole, these records often gives details of the ship in which they were serving when killed as well as family details. These pensions were seemingly administered by the Admiralty, whilst the army records were ultimately incorporated into the Ministry of Pensions. The Ministry of Pensions later became the DHSS - and there is evidence of the records being accessed by the DHSS well into the 1980's.

In addition to the six million or so cards mentioned above, a very large proportion of the records are contained in a series of ledgers numbering approximately 15,000 (comprising of 100 pages in each ledger). These give details of war-related wounds, sicknesses and injuries together with post-war medical board results. Although these records have been subject to some post war "weeding" it is believed the vast majority of the ledgers have survived and - like the cards and Naval Ledgers will be made available via Ancestry's on-line platform. 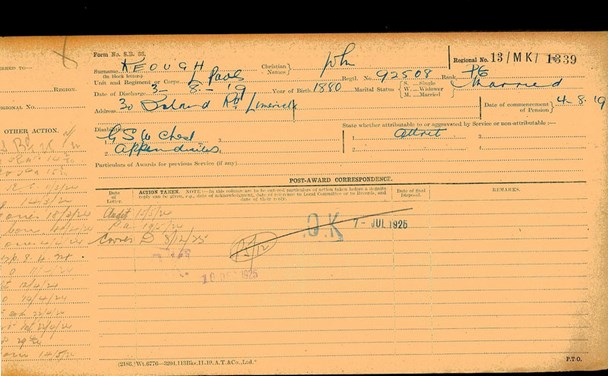 Number 92508 Private William Keough of the Liverpool Regiment (whose home address is in Limerick) had a gunshot wound and appendicitis. The challenge of interpreting the handwriting on these records will be immense.

Naturally the scanning and particularly the tagging will be complex and not insignificant operations, into which Ancestry are investing a lot of resources.

Miriam Silverman, Senior Content Manager for Ancestry.co.uk said “Ancestry is delighted to be working with the WFA in making this vital collection accessible to the public. We believe that digitising these records will significantly help users find information about the soldiers who fought in the First World War and their families; particularly what happened to them once the War had ended.”

The negotiations have succeeded in obtaining an income stream for the WFA for a period of ten years, which will help the association to continue its work. However, in addition to this future source of income, we are delighted to announce that once these become available on-line, it is intended that it will be made possible for WFA members to access the records for free via the WFA's web site. Much work will be needed over coming months in this respect, but this was a very important aspect that was a pre-requisite in the discussions that evolved with Ancestry.

It is also hoped - by both the WFA and Ancestry - that there may be some interest in this collection from academics for whom the payment of post war pensions may be a suitable subject for research.

Before the digital tagging of the records commences, the records have first of all to be scanned, and this in itself is an operation that will take a lot of effort . Because the records are dirty, and some are damaged, all need careful handing. It does not help that some evidence of rodent invasion has been found during the manual look ups! The company that have been selected to undertake the scanning are Mitech Systems of Northamptonshire, who have vast experience in storage and digital copying. They will be liaising with Ancestry and the WFA during the scanning process.

The fact that scanning of the records has now commenced means that the WFA's manual look up service has had to come to a halt. Since its inception, this manual look up service has generated in excess of £13,000 of income to the WFA, with approximately 1,600 records located for individuals seeking information on their relatives. Countless emails of appreciation have been received, including many from families seeking to have their relatives finally commemorated by the CWGC (the WFA's pension records are often the 'proof' needed by the CWGC to officially recognise an individual for commemoration).

Other results have delighted families who have "at last tracked down Great Uncle Bill". A particularly memorable result was when a record provided details of a 'lost' part of a family tree - with the soldier in question seemingly having children that were previously unknown. 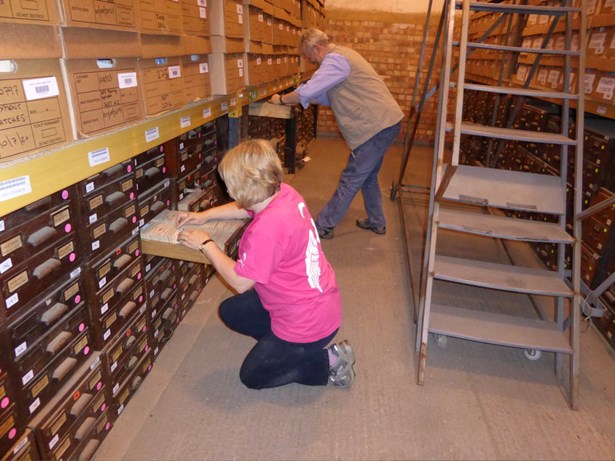 Manual look ups being undertaken. Shown here is just a tiny fraction of the cards which are contained in wooden drawers.

Further information will be made available to WFA members as the process of scanning, and tagging, of the records proceeds over coming months.