Commemorating the attack on Riqueval Bridge : one of the greatest battles fought by the British Army

The attack on the St Quentin Canal was one of the greatest battles ever fought by the British Army.

Once taken, on 29 September 1918, the Riqueval Bridge became a vital supply line over the St Quentin Canal for artillery, tanks, trucks and men.

This video features interviews with Captain Charlton's grandson, military historians and some of today's retired former commanders of the Staffordshire Regiment who together piece together this remarkable story and important historical event. 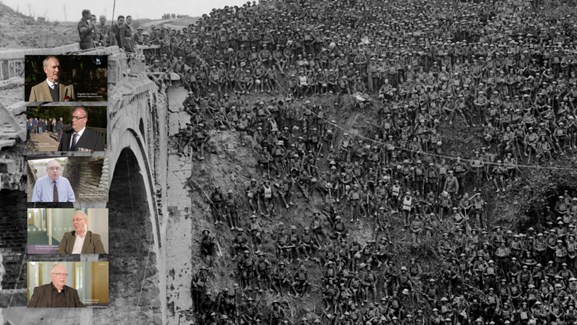 Taken soon after the capture of Riqueval Bridge, this photograph shows Brigadier Major-General John Campbell addressing the multitude of British soldiers on the bank of the St. Quentin Canal.