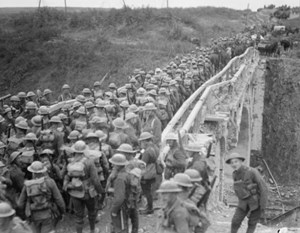 There will be a service to rededicate The Western Front Association Plaque commemorating the capture of Riqueval Bridge by the 46th (North Midland) Division on Saturday 29 September at 4.00pm.

There are further commemoration events to the British, American and Australian soldiers on Sunday  as well as events relating to the First World War taking place in the local village over the weekend.

4.00 pm Unveiling of the WFA Plaque at Riqueval Bridge

9.30 am Commemoration at the Bellenglise Australian Memorial in memory of Australian Soldiers

10.15 am Commemoration at Riqueval Bridge in memory of British Soldiers

11.00 am  Commemoration at the Bellicourt American Memorial in memory of American Soldiers

Details of the event HERE > Commemorating the Capture of Riqueval Bridge

Read an article HERE > about the crossing of the St Quentin Canal by the 46th (North Midland) Division: To Cross the Rubicon You Need… Life-Jackets!

The Battle of St Quentin Canal was a crucial battle of the Great War that began on 29 September 1918 and involved British, Australian and US forces operating as part of the British 4th Army under General Sir Henry Rawlinson. North of the 4th Army, elements of the British Third Army also supported the attack. South of the Fourth Army's 12 mile front, the French First Army launched a coordinated attack. The objective was to break through one of the most heavily defended stretches of the German  Hindenburg Line, which in this part of the line utilised the St Quentin Canal as part of its defence scheme.  The assault achieved its goals that resulted in the first complete rupture of the Hindenburg Line, in the face of heavy German resistance. The casualties were around 8,000 British, 13,000 Americans, 2,500 Australians and 36,000 Germans, mostly POWs.