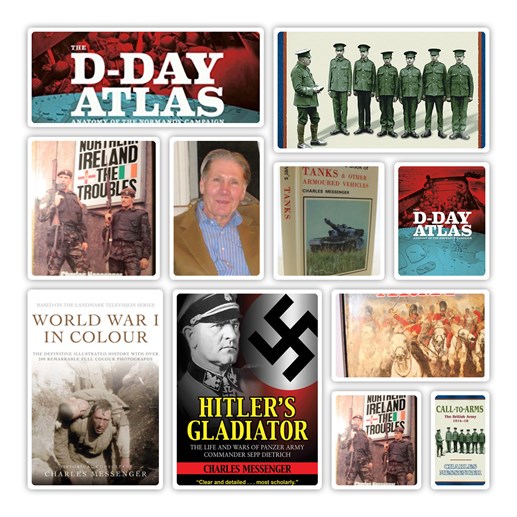 Charles Messenger served for 21 years as an officer in the British Royal Tank Regiment and for 13 with the British Territorial Army.

Beginning his career in the Royal Tank Regiment where he served for twenty years, Charles Messenger then became a full time military historian and defence analyst.

He was a highly respected, a popular speaker and a great supporter of The Western Front Association.

"Devastating news about Charles who was a loyal friend to the London Branch.  Truly an Officer and a Gentleman who wore his erudition lightly, and the best of company. I feel so fortunate to have known him. All thoughts are with his family." Kathy Stevenson.

"I first met the late Charles Messenger in 2014. The venue was the National Archives, Kew and I was immediately struck by the overt kindness shown to a newly-minted PhD labouring to produce his first published volume. Subsequent encounters occurred over the following years, the last a book launch at Westminster Palace where Charles informed me that he would be reviewing my A Moonlight Massacre (2014) for the JSAHR. This turned out to be one of the best reviews I’ve ever received and for that, amongst other acts of graciousness and hospitality, I will always be grateful to someone who was a true gentleman, soldier and scholar." Dr Michael Lo Cicero

"Very sad to learn of the death of Charles Messenger. A writer of accessible, well-researched histories of the British Army and its involvement in military operations." Bryn Hammond

"Very sad to hear of the recent death of Charles Messenger. A fine military historian, a real gentleman and a good friend." Chris Baker

Charles’ funeral is on Wednesday, 3rd April, and the service is taking place at:

There will be lunch and drinks at the same venue afterwards. Nearest mainline railway station is Clapham Junction.

Members of The Western Front Association who knew Charles are invited to attend.

Charles's wife Anne says that numbers are not a problem and there must be many who knew him or who had heard him speak at least.

Details of the location can be found here >