On the evening of 30 June 2022, the 106th anniversary of the eve of the Battle of the Somme, members of The Western Front Association and others attended the UK book launch of Attila Szalay-Berzviczy’s first volume of In the Centennial Footsteps of the Great War, from Sarajevo to Versailles at the Liszt Institute in London.

The event was co-hosted by The Western Front Association and the Embassy of Hungary, with the support of  the Mathias Corvinus Collegium following previous releases in Sarajevo, Budapest and Washington DC earlier in the year.

A welcome address was given by the Hungarian Ambassador, His Excellency Dr Ferenc Kumin, followed by some words from Tony Bolton, Chair of The Western Front Association who spoke to the audience about The Western Front Association, its history, educational work and purpose to perpetuate the memory, courage and comradeship of all those who served on all sides during World War One. He also thanked Attila for the generous donation of £2 from the sale of each book sold in the UK, Ireland and the Dominions or the 1914-1918 era. 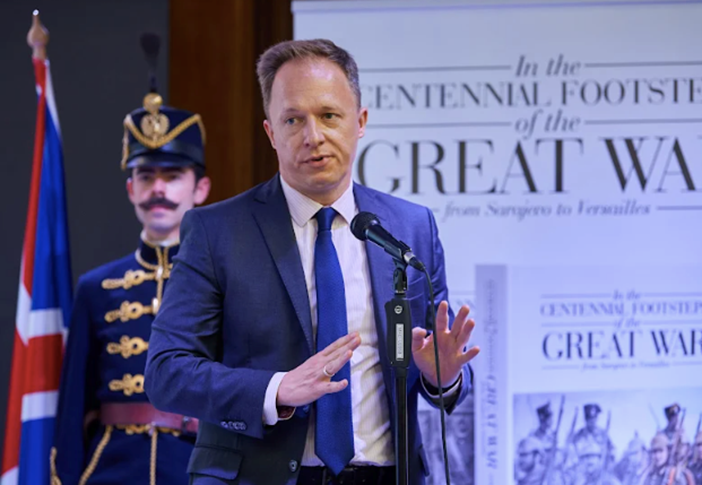 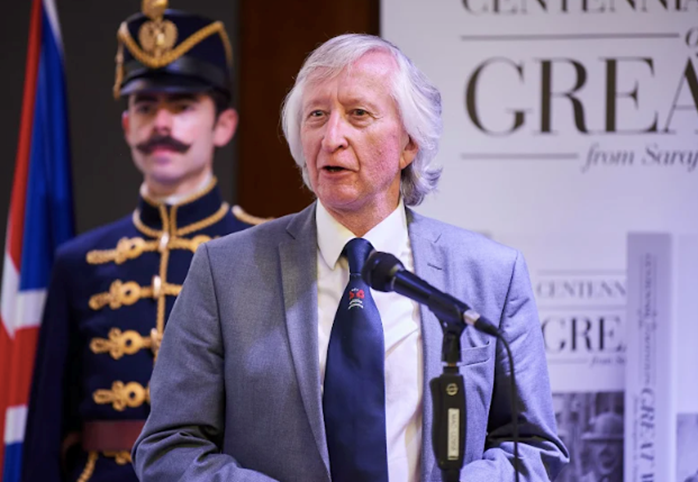 Attila provided an inspiring overview of his extraordinary project, describing how he travelled to all areas of the world touched by the First World War to capture in photographs the way people commemorated the conflict during the four years of the centenary, 2014 to 2018; it is these photographs which are now presented in his spectacular book. 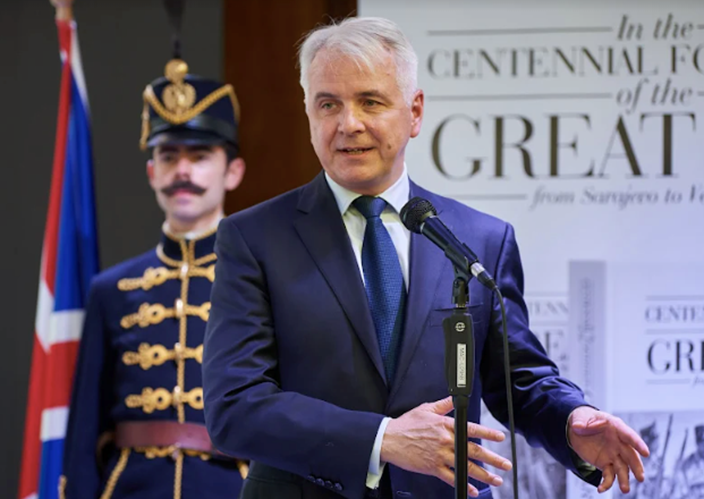 ‘It was an honour for me to have this event hosted by the Western Front Association and the Hungarian Embassy in London on the anniversary of the eve of the Battle of the Somme. In my view no other nation in the world has a bigger interest in the story of the Great War than the British, therefore it is no wonder how important it was to hold a book launch event in London’.

Dr Spencer Jones, Senior Lecturer in Armed Forces and War Studies at the University of Wolverhampton and Honorary Vice President of The WFA, explained the importance of the Battle of the Somme and why it still has resonance to the United Kingdom, Ireland and the Commonwealth to this day. He then chaired a vibrant discussion panel with Attila, Dr Stuart Mitchell, Senior Lecturer in the Department of War Studies at the Royal Military Academy Sandhurst and Dr Peter Hahner, Lecturer of social and historical sciences at the MCC in Budapest. 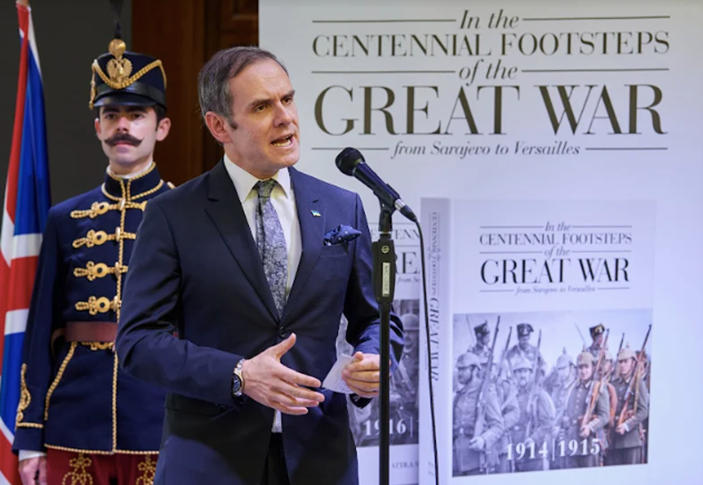 Some interesting points were made. The panel agreed that a number of parallels can be drawn between 1914 and 2022, noting that the world is just as complicated and full of challenges despite decades of peace, economic growth, technological and scientific developments, as was the case before the outbreak of the Great War. Power rivalry is intensifying and arms races are getting faster, while the relevance of military alliances has taken on greater significance than perhaps the last forty years - all against a backdrop of a lingering pandemic and the worsening energy and climate crises.

A mighty military force, Austria-Hungary in 1914, Russia in 2022, invaded a much smaller nation (Serbia in 1914 , Ukraine in 2022) on the basis of historic grievances and national security considerations. Both of aggressors, 1914 and today in 2022, were autocratic states who overestimated their own military potential and underestimated their opponents resolve and resistance.

An interesting comparison was also made between the significant difference between the remembrance of the First World War in Eastern and Western Europe. 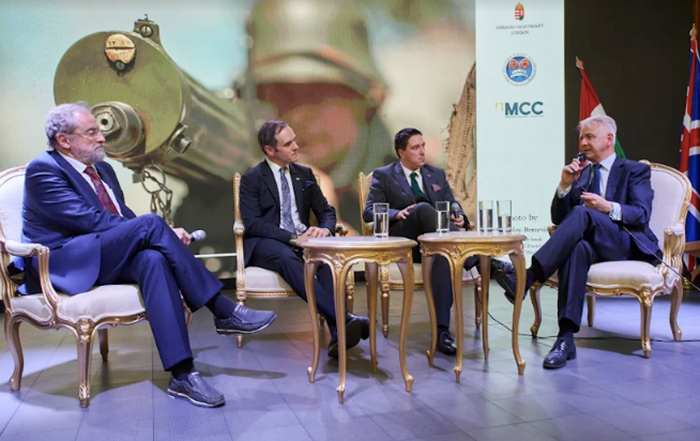 After the discussion panel was complete, Tony presented Steve Cornock with his WFA Heroes Award for his work on the Stereoscope and Pension Card Projects and the audience retired for refreshments amidst a fantastic exhibition of photographs from Attila’s book.Tony Bolton said,

‘It was a great pleasure to meet His Excellency the Ambassador, Attila, some of the Hungarian community in Britain and WFA members who had come along to support the event.The images from the book on display were outstanding and I thank Attila for his kind donation to The WFA from his book sales’. 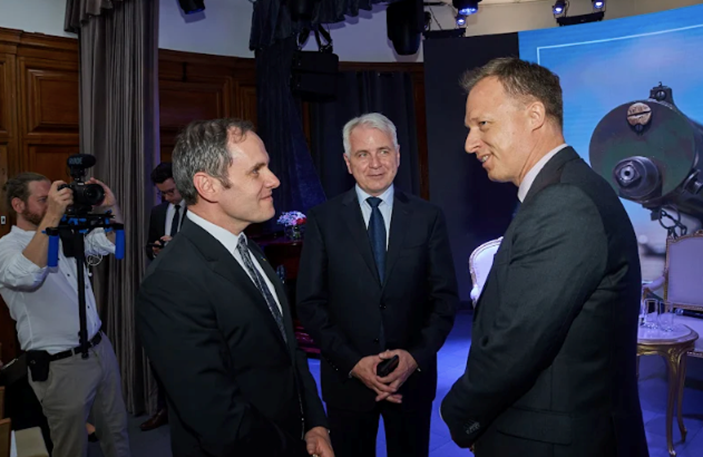 The launch of Volume 2 of In the Commemorative Footsteps of the Great War will be on 12 November 2022 in Zonnebeke, hosted by the Memorial Museum Passchendaele 1917 Memorial and the Hungarian Embassy in Belgium. The plan is that the book launch and the photo exhibition will also be a living history event, as the organisers are expecting First World War reenactors from Germany, France and Belgium to attend. WFA members will be provided with further details of this event in the near future.

A short video can be found at  https://www.youtube.com/watch?v=iagg4xjN8V0&t=214s

Copies of Attila’s book can now be ordered at www.greatwarbook.com/en/