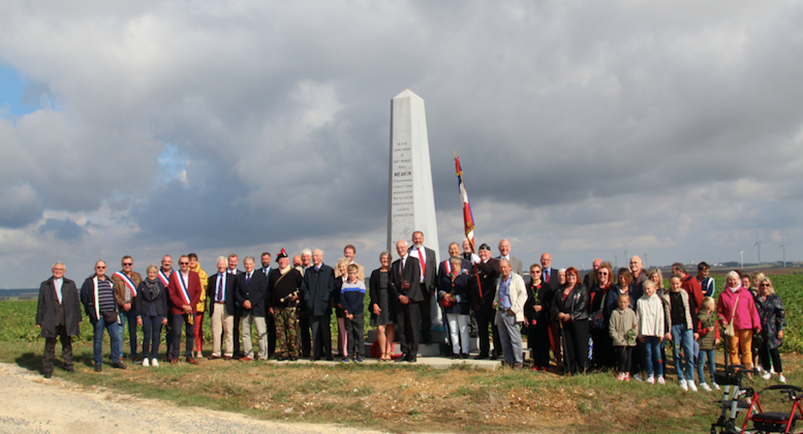 On Saturday 10th September I attended the rededication service for the Meakin Memorial at its new location close to the Lesboeufs to Ginchy road took place, attended by over sixty people including five members of the Meakin family, Etienne Dubruque , the Mayor of Lesboeufs and other invited guests Sadly, owing to the death of Her Majesty, Queen Elizabeth II, the Coldstream Guards had to pull out leaving us with no music or piper. Thankfully, a valued friend from the tourist office in Albert saved the day by arranging for a local piper to attend who began the service by playing a lament as everyone gathered around the memorial.

I welcomed everyone in French and English before my speech outlying how we had saved the memorial. Mr. Dubruque then told everyone why it was so important to his village to remember those who had fought so bravely and paid the ultimate price for their bravery. Thanks to him this whole project was possible. Guy Meakin addressed the crowd in perfect French expressing his family’s eternal gratitude to everyone who had helped save the memorial. Some children from Lesboeufs then read a poem they had written for the occasion. This was followed by Carol Pike reading out her husband Bob’s poem set in two parts describing the near loss then saving of the memorial. The priest of Lesboeufs conducted the religious and rededication ceremonies and paid tribute to our late Queen before the piper played again.

I then read Robert Laurence Binyon’s poem, For The Fallen, before the Last Post was played and the French Tricolore lowered. The minute's silence was impeccably observed before Reveille echoed across the battlefield as we moved to the Lesboeufs war memorial where further wreaths were laid and the La Marseillaise enthusiastically sung. After. We retired to the Marie where a reception was enjoyed by everyone. Finally, invited guests joined the Meakin family at the Basilica Restaurant in Albert which was a very enjoyable and fitting end to a wonderful day.

All that is left now is to get the metal railings restored around the plinth and the memorial will be fully restored to its original condition.

We have £2300 in the kitty thanks to some very generous donations from the Meakin family and the Coldstream Guards but we need £4000 to get these fabricated and installed.

To this end I have set up a Crowdfunding page> https://www.crowdfunder.co.uk/p/great-war-meakin-memorial-restoration

If anyone can spare just a few pounds then this will be greatly appreciated and will go to making the Meakin Memorial one of the most impressive imposing memorials on the Somme to a very brave British soldier.