Commemorating the restoration of the Riqueval Bridge Memorial

In glorious weather on the once British-held part of the Western Front, Western Front Association Chairman Colin Wagstaff and WFA European Officer Any Tongue took part alongside VIPs, dignitaries and guests in the rededication of the Riqueval Bridge Memorial. 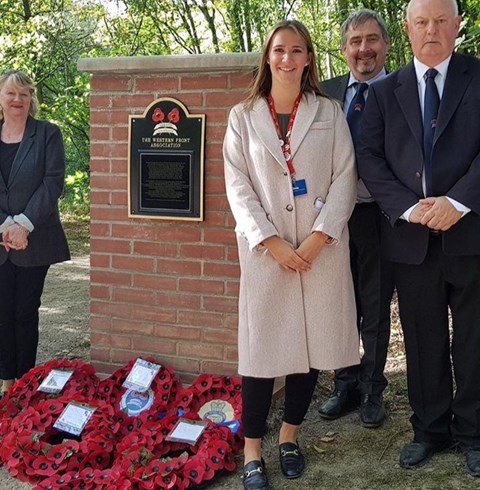 (Next to the newly rededicated Riqueval Bridge Memorial)

In attendance were the great grandson and great nephew of survivors of the 29 September 1918 engagements on the Western Front.

It is here, following the capture of Riqueval Bridge, that one of the most iconic photographs of the Great War was taken representing the building successes of what become known as 'The Hundred Days' and led to Allied Victory in the First World War by 11 November. 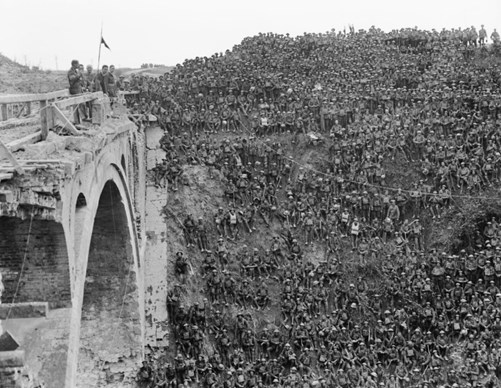 The rededication came about as an inspection of the Riqueval Memorial in June this year. it was found that repair and restoration work was required on both the brickwork and plaque. 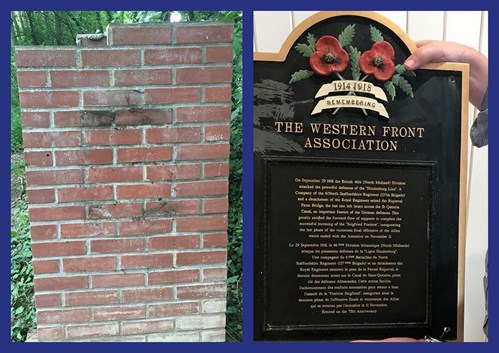 The plaque had been scratched in places. Attempted metal theft is a problem but in this case they would have found the the plaque is made of plastic. Having been removed and restored the plaque was returned to its place. 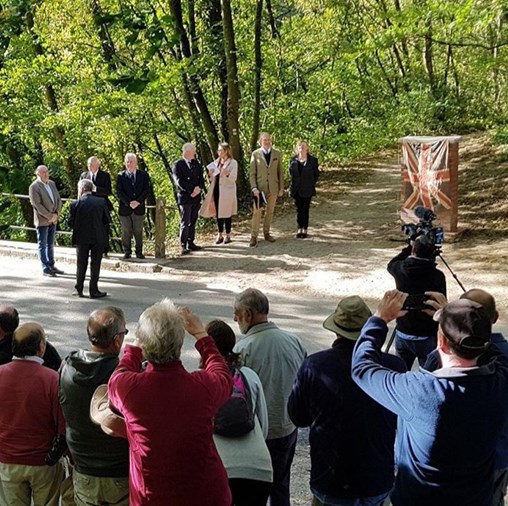 The commemoration to mark the restoration of the plaque took place on Saturday 29 September.

The Battle of St Quentin Canal began early on the morning of 29 September 1918 with a daring raid across the bridge in the morning fog. Ten men overran a German machine gun post and prevented the destruction of the bridge. This was a crucial battle of the First World War that involved British, Australian and American forces operating as part of the British 4th Army under General Sir Henry Rawlinson.

North of the 4th Army, elements of the British Third Army also supported the attack.

The objective was to break through one of the most heavily defended stretches of the German Hindenburg Line, which in this part of the line utilised the St Quentin Canal as part of its defence scheme.

The assault achieved its goals that resulted in the first complete rupture of the Hindenburg Line, in the face of heavy German resistance. The casualties were around 8,000 British, 13,000 Americans, 2,500 Australians and 36,000 Germans, mostly POWs.

As a result of this defeat the German Command felt that the war they had begun could no longer be won.

Read an article HERE > about the crossing of the St Quentin Canal by the 46th (North Midland) Division: To Cross the Rubicon You Need… Life-Jackets!

Details of the events HERE > Commemorating the Capture of Riqueval Bridge