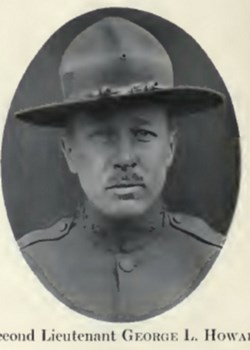 A graduate of Yale University, Class of 1905.

First Lieutenant George L Howard was a resident of Brooklyn, New York and a graduate of Yale University, Class of 1905. (1) A longtime member of the 71st New York Infantry, George came up through the ranks and was commissioned a Second Lieutenant prior to his service along the border with Mexico. George returned from border service in September 1916. On 6 April 1918 George was again called upon to serve when the United States declared war on Imperial Germany.

Assigned as a Platoon Leader with Company L, 105th Infantry, George was held in high regard and considered the best junior officer in the battalion. After training at Camp Wadsworth, South Carolina George shipped out for France as part of the regimental advance party on 28 April 1918. George, along with other officers of the advance party, was temporarily assigned to a school in the American sector for military instruction and later rejoined his company near Tilques, France on 7 July. (2)

Upon arriving in France, the 27th Division was assigned to the support of the British Army and trained in the forward area and were available for the defence of rear positions. On 30 June 30 the 27th Division was ordered to move to the Ypres salient in Belgium. On 9 July 9 the division organised to defend a portion of the East Poperinghe Line in the Dickebusch Lake area. (3)

In mid-July George received word that he had been promoted to First Lieutenant, but the promotion came with a transfer and assignment as the aide-de-camp to the 53rd Brigade Commander: however; “(w)ith his usual loyalty to his comrades Lieutenant Howard protested that he would prefer to stay as a Second and remain with his platoon but he found that in the army 'Orders is orders’ (sic) and he had to obey.” (4)

(1) ’Dedication of the Memorial tablets Erected by the University to the Men of Yale Who Gave Their Lives in the Service of Their Country During the Great World War’ ,Yale University, 21 November 1920, [http://books.googleusercontent.com/ books/content?req=AKW5QafT2Ejv5fZA08DnVSMJ8wAtZJLEZ0E-RZsuQG2gRhQ-25xeV8XfitqaeWYmutPe XVgT3ft_Z5I79JBySG1XOoZC0utB4fiFA4ulxLb6W8b3LSyd81T3hX PnOKaltWyseJys2jOPoSC88jGZ6n4EeLc1tn2IDU7F2FDjqxktHnH-iHYiwJGlMWDrI3MHdw9Rk7zk2YHSp2xq GTBu0ms3yYymk ObivWaC3sRY CGS6 g wD3I1ok28] (accessed 30 July 2016)