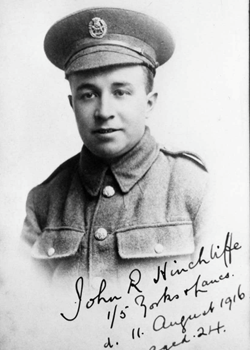 Son of Albert and Elizabeth

After his early education at Mirfield Parish Church School, he won a scholarship for the Mirfield Grammar School.

On leaving the Grammar School he went to Ravensthorpe National School as an assistant teacher and subsequently moved to York for his formal teacher training. After graduating from York, John took up a position at Grimethorpe Council School, near Barnsley.

He was called up into the army on 8 February 1916 and, after training, went to Southampton on 23rd June from where he was sent straight to his battalion as one of the regular drafts of reinforcements. Whilst en-route from Le Havre to the front he had time to write to a friend: 'On the way up we stayed at a farmstead. Unhappily for us there was no straw about and the rats played hide and seek with us.' 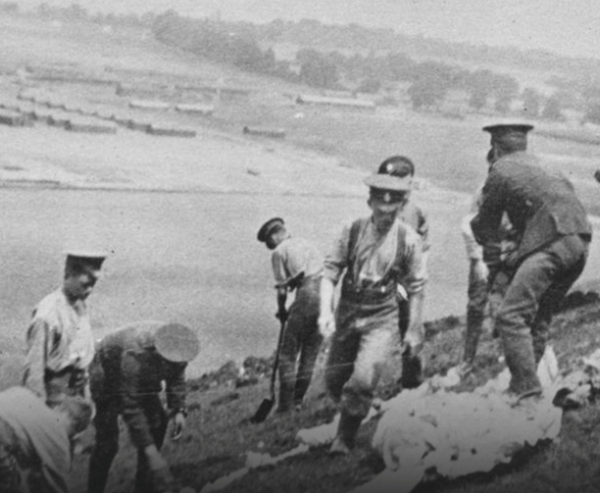 He went into the trenches for the first time on 1st July.

John  was a member of the 1/5th Battalion, York and Lancaster Regiment. On 1st July the battalion was in trenches in Aveluy Wood, across the River Ancre, behind the Ulster Division’s attack. At 1.30pm the battalion was called forward, ‘A’ and ‘B’ Companies were sent to the north side of the River Ancre and pushed into the front line trenches.  ‘C’ and ‘D’ Companies proceeded through Thiepval Wood and, despite heavy shelling eventually found their way into the original front line from where, at 6.30pm they observed an enemy counter-attack dispersed by British artillery and machine gun fire.

Thirteen men from this battalion were killed on 1st July.

Thiepval Wood and the immediate area plays an important part in the stories of many of Ravensthorpe’s soldiers. The wood ran from the river up the steep valley to the Thiepval Ridge, on which sat the village of Thiepval; the village was the key to the German’s defence in the northern half of the Somme battlefield. Thiepval was fortified and stood at the crest of the dramatic bluff which marked the northern extremity of a ridge of high ground. This high ground stretched south-eastwards past the village of Pozieres (on the Albert-Bapaume Road) to High Wood, well into the southern sector of the Battlefield. Whilst the high ground disappears into gently rolling fields to the south, the sudden ending of the ridge at Thiepval emphasizes the size of the breathtaking Memorial to the Missing which is situated in the grounds of the old Thiepval Chateau.

The 1/5th York and Lancasters had been pitched into the front line with two companies north of the River Ancre and two companies south of the river. On 2nd July ‘A’ and ‘B’ Companies were withdrawn from the line north of the river and joined the rest of the battalion on the edge of Thiepval Wood. It was at 11am the following morning (Monday 3rd July) after heavy artillery activity by both sides, that the battalion’s War Diary records: 'A report was received that the enemy had put out a smoke barrage in front and was massing [for an attack]. Precautions were made to receive him.' The attack never developed. The War Diary continues:

10.40pm Since 3.15pm the enemy had been absolutely quiet. Captain Goodall took a strong patrol of 20 volunteers to find out strength of enemy in Bosche lines. Wounded R.I.R. [Royal Irish Rifles - of the 36th (Ulster) Division] officer found outside wire who had been out three days. Patrol reached enemy wire and were cutting through before they were fired on. Just after party returned, enemy opened a very heavy artillery and M.G. fire which continued for about two hours.

Although the War Diary indicates very heavy casualties during 3rd July, the figures quoted in S.D.G.W. are much lower (four killed and one died of wounds); obviously there was a great deal of confusion. Although it is not known how many men were injured on the 3rd July, John Hinchliffe was one of those who was badly wounded.

The Dewsbury Reporter goes into a great deal of detail about the extent of his injuries, saying 'His wounds were on the face, shoulder and body and it is surmised that a formidable piece of shrapnel struck his face, which it grazed slightly, and proceeded downwards through the shoulder and out of the arm pit and struck his body.' He was also wounded in the foot and ankle.

After being evacuated from France, he was sent to Netley Hospital near Southampton where he seemed to be making a recovery. 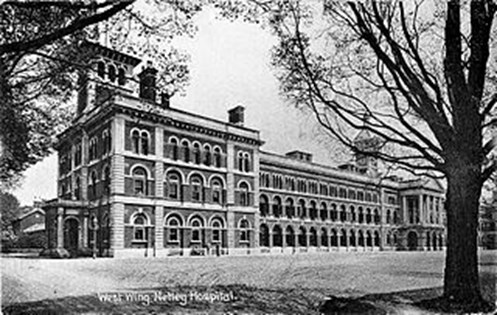 By early August he was able to sit up in bed, however he suffered a relapse and septic poisoning set in. On Friday 11th August his parents, Mr and Mrs Albert Hinchliffe received a telegram at their home at 23 Lee Street, Ravensthorpe summoning them to the hospital. After what must have been an agonizing journey they arrived at Southampton just after midnight on Saturday 12th August. After a walk of four miles they arrived at Netley Hospital to be informed that John had died half an hour previously. 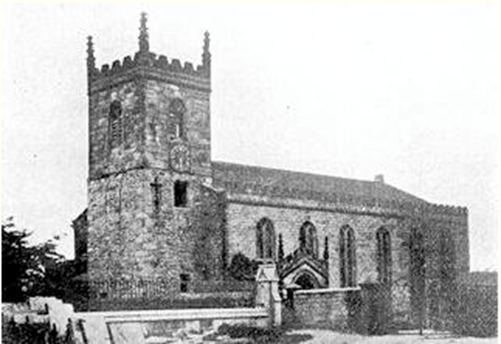 John’s body was brought home and was buried in the churchyard at St. Mary’s Parish Church, Mirfield. Unfortunately his grave is no longer marked by a headstone.

He is commemorated on the Ravensthorpe Parish Church War Memorial 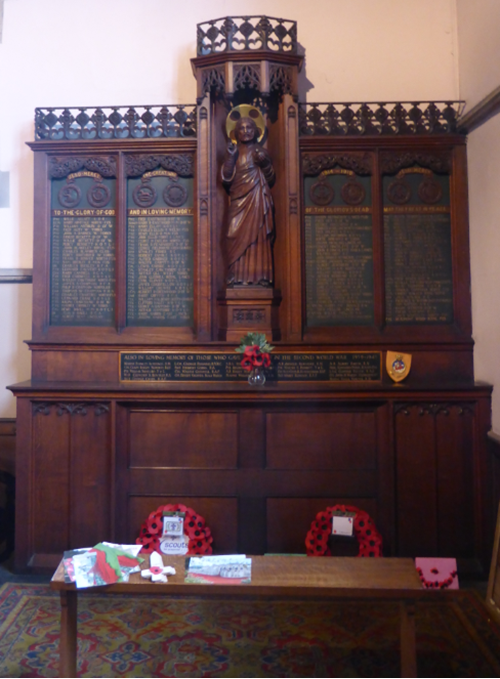 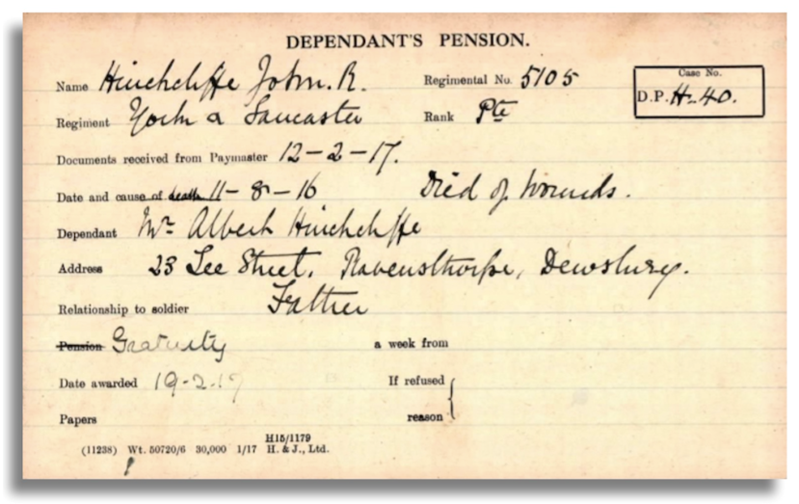