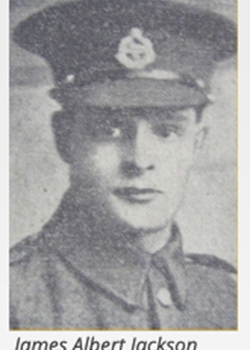 James was living in neighbouring Burnley where he was employed as a ring jobber in a cotton mill.

After enlisting into the East Lancashire Regiment in Burnley in September 1914, he embarked for France on 18 July 1915 and spent the major part of the year in the Festubert and Neuve Chapelle sectors (including taking part in the Loos diversionary action at Pietre on 25 September 1915) before moving southwards for the Battle of the Somme.

Not actively involved in the opening day of the Somme battle, James saw much action in and around the village of La Boisselle as from the 2 July.

Badly wounded in the head and throat by shrapnel on 6 July 1916, James suffered some 16 separate wounds, including brain injuries and was evacuated back to the UK. He died of these wounds – his wife was present - in King George’s Hospital, London.