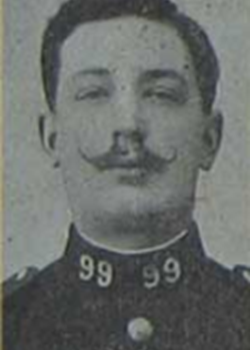 From Ste Denis de Cabanne, Emilien was called up for his compulsory military service in 1909, he was an active army reservist who was recalled to service immediately upon outbreak of war. He saw action at the Battle of la Mortagne, and the first Battle of Picardy. He was killed in action near Fontaine Les Cappy on the Somme during a divisional assault on Bois Etoile that took place on 17 October 1914. Emilien has no known grave.