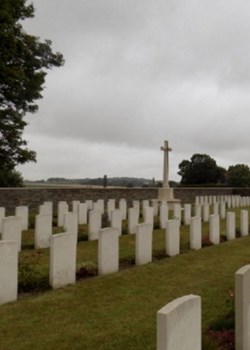 Corporal Paul I McLeod was born in 1894 in Saint Johnsbury, Vermont to Mr. and Mrs. Donald McLeod. (2) In civilian life he was an employee of the Chatham and Phenix National Bank of New York. (3) Paul enlisted with the 7th New York Infantry shortly after the United States declared war on Imperial Germany.

After training at Camp Wadsworth, South Carolina with his regiment (now designated 107th Infantry Regiment), Paul shipped out for France aboard the U.S.S. Susquehanna on May 9, 1918. (4) Upon arriving in France, the 107th Infantry, along with the other regiments and machine gun battalions of the 27th Division, began intensive combat training under British supervision.

On 9 July the division organised to defend a portion of the East Poperinghe Line in the Dickebusch Lake area. (5)

Shortly after midnight on 18 August Company I was assembled and inspected on Dickebusch road near ‘Indus Farm’ before moving up to ‘Ridgewood’ near Dickebusch Lake. Companies I and K were to relieve elements of the 105th Infantry occupying forward trenches east of the lake. The relief went without incident and 2nd Platoon of Company I settled into defensive work.

On the night of the 19 August the 3rd Platoon to Leland’s left ‘…shoot up what seemed to be a party of Boches mending wire or establishing a new post’. The troops, new to combat unleashed ‘several pans of ammunition’ from their Lewis guns; thus informing the Germans that the trenches to their front were occupied by fresh and inexperienced troops.

‘At stand-to the dawn came up like thunder as a salvo of trench bombs landed in our immediate vicinity. The minenwerfer bomb is a sheet iron cylinder full of T.N.T., projected at a high elevation to drop into a trench and wreck things by concussion although its fragments make a nasty wound. It makes a frightful racket – a metallic ringing explosion. The particular lot landed just outside our trench, one on the parapet, several over it, but not one in it, thank God! None was hit although several were groggy from the shock of the explosion. After the bombardment appeared to be over I took stock and was breathing easier when a runner came tearing in from Jessup’s trench, saying that a shell had exploded in a fire bay and killed or wounded a whole squad – McLeod’s. He asked me to send him a stretcher and our first-aid man, which I did. Corporal Paul McLeod and (Private) George Leary were killed outright…. (the) severely wounded had to lie on the trench bottom until night before they could be taken out’. (6)

Corporal Paul I McLeod was killed in combat on 20 August 1918.

Facebook: The Long Trail: The Making of a Combat Division@27thDivisionUSA