One of ten children, of Robert (a labourer) and Thomasina (née Blyth) five boys and five girls born between 1875 and 1901 of New Row, Alnwick, Northumberland.

Tommy married Alice Allan (July 1900). At the 1901 Census he was an engine driver in a stone quarry.

Before the war they lived in at 277, Maypole Street, Ashington where Tommy was a miner. They had a son, Edward, born 1904.

Tommy enlisted in the Northumberland Fusiliers 2 September 1914. He was transferred to RNVR (Hood Battalion) 7 September 1914 and served in Antwerp then with the Mediterranean Expeditionary Force later serving at Passchendaele.

Tommy was awarded the Distinguished Conduct Medal for action at Grancourt 3-5 February 1917. He was reported as missing in action on 22 September 1917, but it later transpired that wounded, he had been taken prisoner. He died of his wounds on 24 September 1917.

Tommy was one of four sons his family to die during the First World War:

Brother George Egdell served and survived. He was wounded on 26 April 1915. 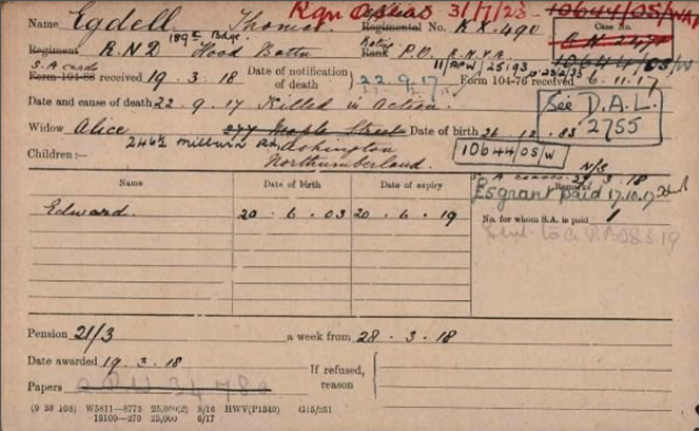 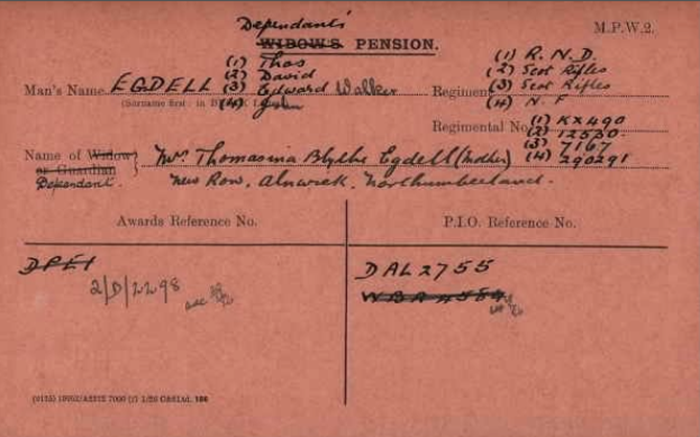 Thomas Egdell's mother Thomasina lost her husband, who died by natural causes, in July 1914. George was sounded in 1915 and survived the war, but she then lost her remaining sons to the war in 1916, 1917 (two sons) and in 1918. She had five daughters.