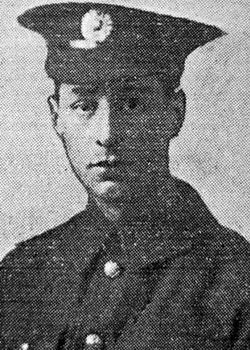 Joshua was the youngest son of four surviving children. His father Arthur Mitchell was a rag trader, his mother was Susannah. He had two older brothers George (by 10 years) and Bernard.

Joshua enlisted in Dewsbury, joining the Corps of Royal Engineers, Service No. 145053. He embarked for France in June 1916. It is most likely that he was wounded during the final stages of the Battle of the Somme, the local paper reporting that he received his wounds on 4 November when he was approaching his 21st birthday.

27 November 1916 died of his wounds at St.Luke’s Hospital, Halifax.