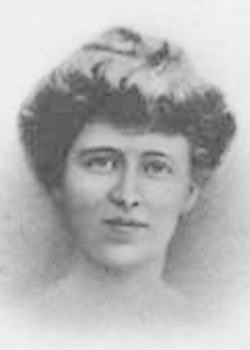 Also known as 'The Jean d'Arc of the North', Louise de Bettingnies was born on 15 July 1880 at St.Amand-les-Eaux. Although from a penniless background (the family fortune disappeared before she was born), she was well educated and eventually became a housekeeper to English and German families - learning the languages and discovering Europe in the process. During the German invasion in 1914, she (and her sister) helped in the defence of Bethune - keeping the defenders supplied with provisions during the fighting.

In February 1915, during a visit to Saint-Omer, Louise was contacted by a French officer who suggested that she might serve her country as an intelligence agent. Soon afterwards, this proposition was put forward once more - this time, however, by Major Kirke of the British Intelligence Service. After discussing the propositions with her ‘spiritual advisor' (Father Boulengé, who was later to give her the nickname "Joan of Arc of the North"), she agreed and was soon located in the Lille sector. Under the guidance of the Duke of Charost, she began to operate the intelligence network known as ‘Alice'. Travelling through Belgium and the Netherlands, Louise (now code-named ‘Alice Dubois') passed on information to Great Britain. From the spring of 1915, she was assisted in her duties by Marie-Léonie Vanhoutte, alias Charlotte Lameron. Ms Vanhoutte, had worked on the installation of ambulances since August 1914 and was therefore able to travel quite freely around the German occupied territory - using this status to gain information. She used her trips to Bouchaute, Ghent and Roubaix, to pass on news to families of soldiers and deliver mail...she also kept the British military updated with information on German troop movements and strategic locations.

The Alice network consisted of between 80 and 100 people and was so effective that it has been estimated that over 1,000 British lives were saved during its period of operation. Much disruption to German rear organisation was also caused (even as far as the bombing of the Royal Train carrying the Kaiser!). One of the last messages transmitted referred to the possibility of a massive German attack near Verdun scheduled for early 1916. Unfortunately, this message was disbelieved by the French.

As could be expected, German intelligence worked overtime to try and destroy the Alice network and, on 24 September 1915, Marie-Léonie Vanhoutte was arrested in Brussels and forced to identify Louise from photographs. Louise, herself, was arrested whilst crossing the Franco-German border using false papers after returning from England in order to direct operations on 20 October 1915. Incarcerated in St Gilles prison, Louise was, in March 1916, sentenced to death for espionage (although the War Council couldn't prove that she was the head of the network) but this was commuted to life imprisonment. In April 1916, she was moved to Sieburg prison near Cologne where, in 1917, she was placed in solitary confinement for refusing to produce arms for the German military and for inciting other inmates to riot.

In September 1918, Louise fell ill and died on 27 September due to complications that arose during an operation on a pleural abscess. She was buried in Bocklemünd cemetery in Westfriedhof, Cologne but her body was repatriated on 21 February 1920, and she was reburied in Saint-Amand-les-Eaux cemetery (at the end of a funeral service in which her coffin was carried by gun-carriage).

On 16 March 1920, a tribute was arranged in Lille where Louise was posthumously awarded the Legion d'Honneur, Croix de Guerre avec Palme, the (British) Military Medal and the OBE. She had also been mentioned in Joffre's dispatch of 20 April 1916. A statue of her was also inaugurated (on the initiative of Foch and Weygand) in Lille on 11 November 1927. Her original grave-marker from Cologne can also be seen in a dedicated display at the Notre Dame de Lorette.