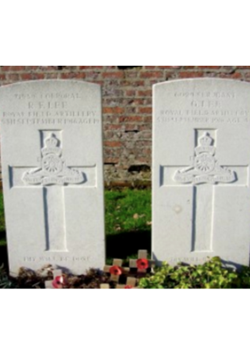 Buried Grave I A 35 alongside his son.

Buried alongside his father: Dartmoor Cemetery, north-east of the village of Becordel-Becourt. Grave I A 36

At the 1911 Census George, and his wife Frances (both from Scotland, George was born in Dunbarton) and son lived at 490 New Cross Road, Depford. George and Frances ran a pub.

14 January, 1915 Mayor of Camberwell was authorised to recruit a brigade of field artillery and it was thus that 156th Brigade of the Royal Field Artillery was formed. Those living near to Peckham, which would have included George and Robert, were allowed to live at home, whereas others were housed in Gordon’s Brewery and at the Tramway Depot. (1)

On 19 May 1915 they embarked for France, forming part of 33rd Division, III Corps of the IVth Army.

Each brigade was made up of four guns: three 18-pdr batteries and one howitzer battery, later increasing to six guns per battery, though adjusting in size according to losses and replacements.

Starting on La Bassée Front in early 1916, the 33rd Division then moved down towards the Somme by train on 14 July.

Sergeant Lee and his son Corporal Lee, in the same Brigade, though not necessarily on the same gun, then took part in ‘The Battle of the Somme’ for eight continuous weeks - with one rest of ten days in the middle’.

During this period eight different divisions were covered by the batteries, with fourteen separate attacks given support by 33rd Division Artillery. (2)

On the 5th August there was heavy shelling with saw 167th Bde, 33rd Division Artillery, ‘bombed out’ and was reduced from three batteries of four guns each to form two six-gun batteries. 167th Bde were ‘bombed out again on the 17th. It has to be wondered if something similar occurred to 156th Bde the following month leading to the deaths of Sgt and Cpl Lee.

At the end of August, the zone covered by 156th Bde extended along the High Wood- Bazentin le Petit road southwards from the north-west corner of the wood.

Every gun and howitzer of the 33rd was in action, directed from observations in an Old German trench that ran along the west of Delville Wood.

On 3 September, 'large numbers of the enemy were seen gathering in Switch Trench and entering the east corner of High Wood'. In response the guns of 33rd Division Artillery were switched round to deal with enemy counter-attack.

Perhaps Sergeant Lee and his son Corporal Lee were badly wounded on the 3rd or 4th September and evacuated to the rear?

If they died in fighting on the 5th September this was unfortunate as that morning the battery commanders of the 1st and 2nd New Zealand Field Artillery Brigades came up with once section apiece and began to take over the 33rd battery command. Relief was complete by the 6th September and the 156th moved to quieter spots at Bonnay and then onwards to Arras.

Sergeant Lee and his son Corporal Lee were just two of 117 ‘other ranks’ killed during the actions of the 33rd Division on the Somme that summer. 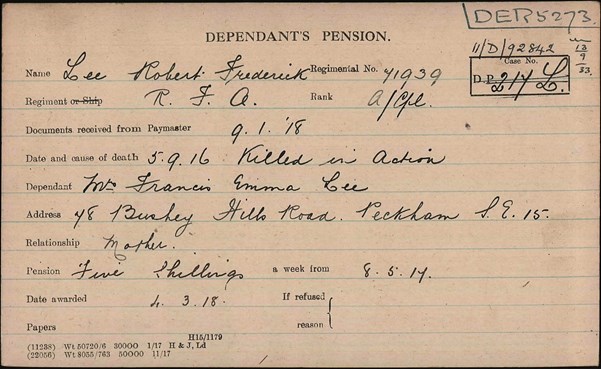 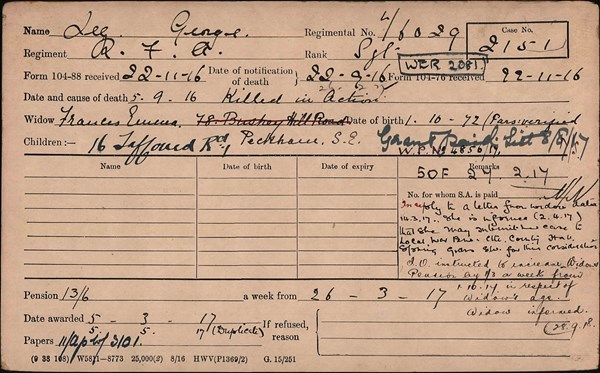 Frances, the wife of George and mother of Robert, was advised that she could apply for an increase to her pension; she did so and was successful. 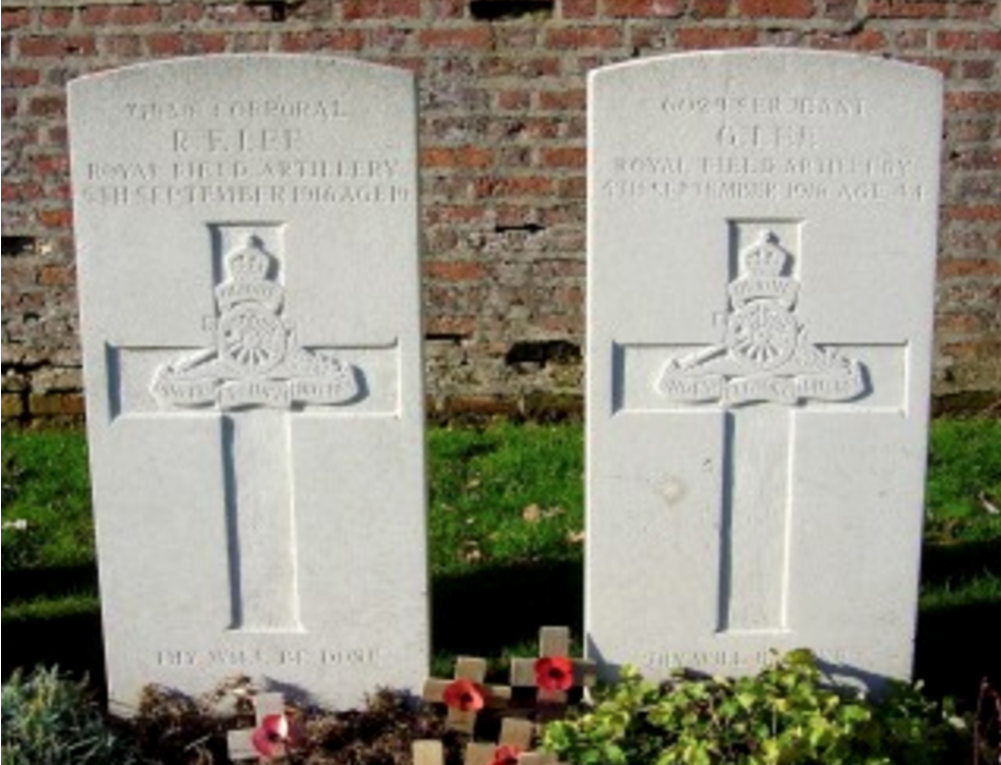 IMAGE: Adjoining graves, Plot I, Row A, Son and Father side by side