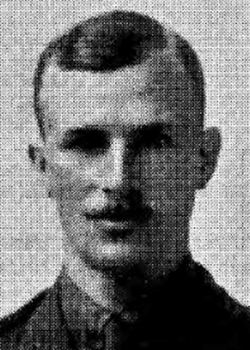 Went to France and was severely wounded in action on 2 july at Ovilliers, La Boiselle. He died at the Duchess of Westminster’s Hospital, Touquet, France, 9 July, 1916.

His Colonel wrote: “He was a most popular and gallant officer, and led his company across to the enemy’s lines splendidly,” and his Caption: “He was a magnificent officer, and made his platoon the most efficient in the battalion.” One of his brother officers wrote : “He had earned quite a reputation by having trained the platoon that won the competition for general efficiency and smartness, open to the whole Brigade.” His two elder brothers were serving at the time of his death as Captains in the R.A.M.C. and his yr. One, a Corporal, in the Coldstream Guards, was wounded on three occasions.